How to achieve this light faded, desaturated look?

how can I achieve this look, as seen in photos by Simone Favilli? I love the soft light effect and colours of this image but I don't know how to achieve it in Post-processing. Any suggestions? Thanks

This look is primarily the result of lifting the black point of the tone curve and the application of an orange-teal slpit toning. As for shooting the image itself, a shallow depth of field such as f/1.8 and diffused light was used.

There's a trick I use to attempt to 'reverse-engineer' what may have been done to a photo in post.
It's imperfect because it relies entirely on guesswork - without access to the untouched original you're never going to know the actual start-point. If you have a start point & an end result you can confirm your guess. Without, it will always remain a guess.

I've looked up the photographer's work & let's say, they're a great fan of veiling glare done right there in the lens. Lots of light spill will cause haze in the picture.
Because it's essentially a dark indoor shot I'd initially considered the room had been intentionally smoked - & this might still be the case, even allowing for the photographer's proclivity for glare; but we may never know.

Anyway, to test my reverse-engineering I open in Photoshop Camera RAW & try to remove any elements I think have been added in post. This does not give you a nice looking picture - nor is the intention at this stage to even try to get a nice-looking picture - it just gives you some clue as to what may have been done, opposite to that.

I've blurred this to try make it a bit more SFW. [If people still think NSFW, then I can just hide it behind a link] but it shows my rough guess at what the shot may have been before post. 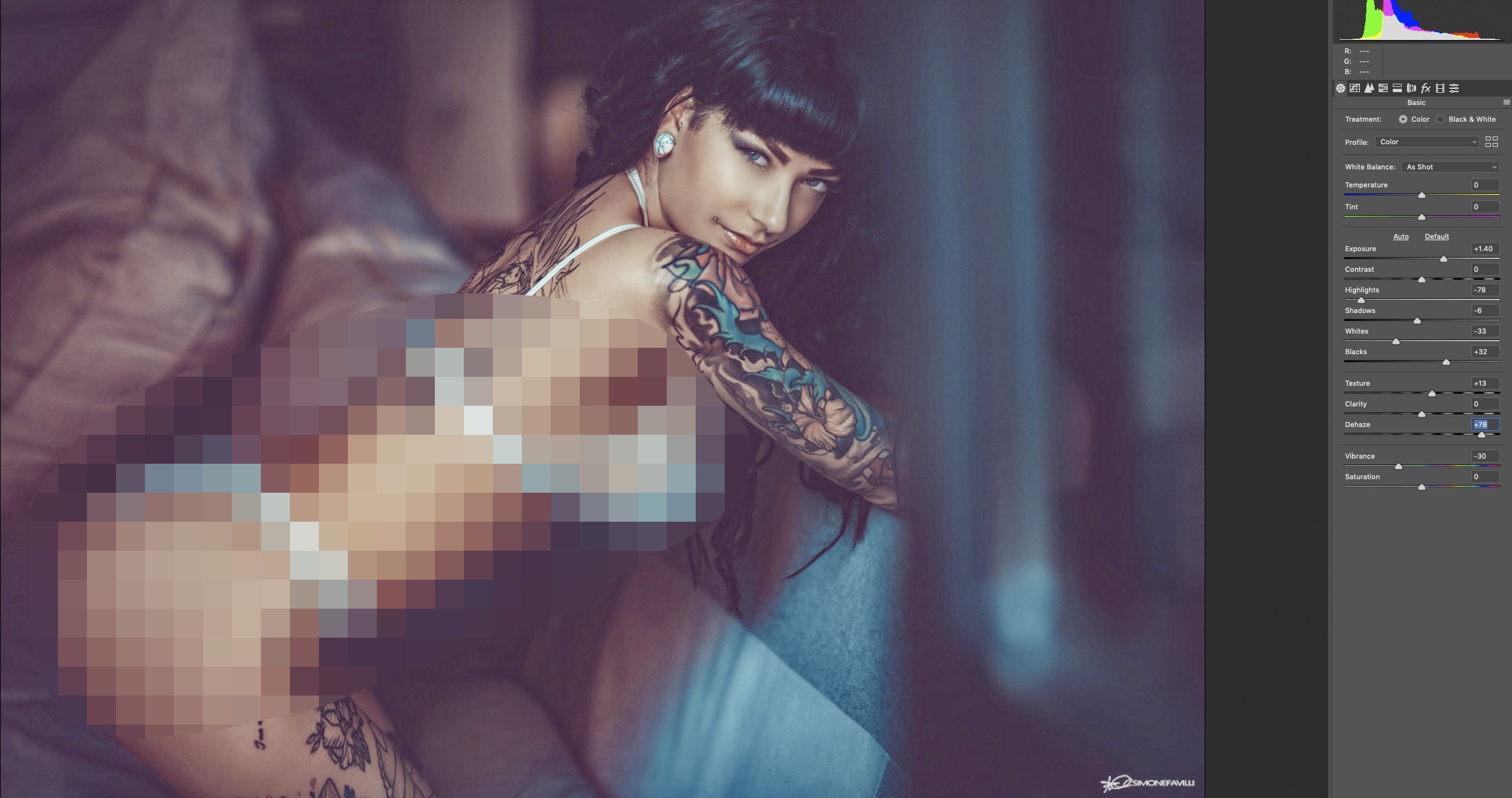 I've ignored the colour-cast as that's quite clearly an aqua-blue light, & I haven't tried to make it look like it was shot in completely neutral circumstances; it's not really worth going to the n-th degree on a guess.

You can get this 'reverse-engineering' effect in a dozen ways, balancing Texture & Dehaze [to play with the veiling potential] against exposure, high/low offset & vibrance/saturation.
It doesn't 'give you the answer' but it does give you some clue as to how far from 'normal' the shot might be, as published.

To recreate it for yourself, you first need the tonal elements, girl with brown skin & aqua clothing & tattoos against a background emphasising these - brown sofa, aqua lighting, deep shadows.
I call this the 'Game of Thrones' colour palette. Brown or orange against aqua or blue was a very great part of the look of the show. Even where you think people are wearing black clothing, it's often actually blue.
Curtain or similar in close to give the foreground blur, aperture wide enough to get the background out of focus.
Post-pro sharpening on subject only - Unsharp Mask or High Pass.

Test the aqua light positioning to try get the glare - otherwise you'd have to haze in post, which won't have quite the same effect.

Then you attempt to get a shot that looks like your 'guess', then reverse it in post by simply moving all the parameters the opposite way. It won't be perfect, but it can often be a good start.

Not the answer you're looking for? Browse other questions tagged post-processing color effect or ask your own question.

19
How do I get this foggy/cold/blueish look in my photos?