Is it possible to determine the color temperature of a light source from a photo?

I have several recessed LED lamps that I'd like to assess for color temperature so I can purchase replacements. The lights are advertised as having a "color temperature" of 2700K and 3000K among others (example here). Is there a way to detect the color temperature from a photo or the lamp, perhaps by taking a photo side-by-side with a grey card?

It turns out that my camera will display RGB histograms, so there is no need to transfer the pictures to a PC to check things out, everything can be done with the camera display.

So, a quick test with my bed lamp, shooting my color reference, changing the color temperature (which is conveniently add to the display):

The green histogram doesn't move, but the red and blue one eventually get aligned at 2700K.

Coincidence? This is exactly what the lamp markings say:

In order to fully compare the light output of two sources, one must consider both the temperature (Blue ←→ Amber) and tint (Green ←→ Magenta) of the light a source emits.

Measuring color temperature alone will not tell you all of the differences between two light sources. Color temperature is but one axis in color space that includes the colors emitted by black body radiators when heated to specific temperatures expressed in degrees Kelvin. The glowing gases on the surfaces of stars, for example, are black body radiators. So are most metals when heated until they begin to glow, then melt, and finally turn to vapor if heated hot enough.

Most natural light sources emit light only along this Blue ←→ Amber axis. But other light sources can also have a strong "tint" along the Green ←→ Magenta axis in the light they emit. For example, the LED lighting currently used for stage illumination in a lot of small night clubs can have a much more magenta tint to it than a black body radiator will emit at any temperature. Typical old style fluorescent lights, on the other hand, emit a much greener tint than a black body will radiate. This "tint" axis is more or less orthogonal to the "color temperature axis/curve in color space charts. 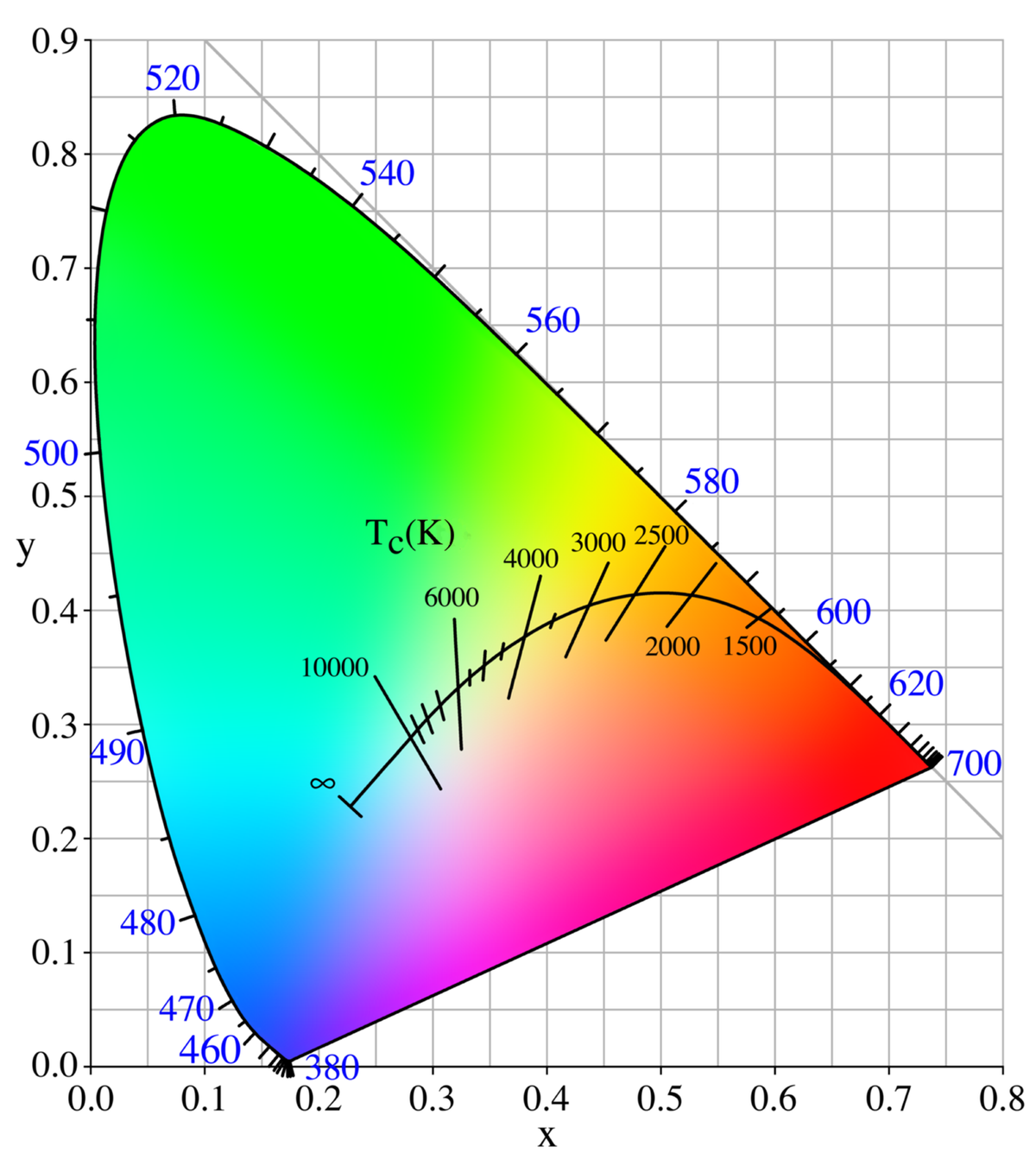 The longer curve is a representation of the color temperature axis. The shorter hash marks that cross it are oriented in the direction of the tint axis at different points along the CT axis.

So how do I measure the total white balance of a light source using a camera?

One way to do it is to take a photo of a color neutral object such as a "gray card" and save the raw data collected by the sensor. Then open the raw file in a raw conversion application, such as Lightroom, and adjust the color temperature and white balance correction values until the RGB values, represented by numbers such as (228,247,218) are all equal (233,233,233). The color temperature of the light source is whatever CT value, expressed in degrees Kelvin, you are using on the CT adjustment. The tint of the light source is indicated by the amount of Green ←→ Magenta correction applied. With Canon's Digital Photo Professional, which is what I often use to process raw files, each unit of Green ←→ Magenta correction represents a five Mired color correction filter.

Not very many applications that show EXIF data will display that information in the EXIF data, though. Some raw convertors will open raw files using that value in the EXIF info as the default value if the selected options for opening raw files specifies to use camera calculated WB. Among the tools I routinely use, it isn't displayed. But if I upload an image taken with my Canon EOS 5D Mark III to Flickr and allow the EXIF info to be displayed, anyone can click on the "Show EXIF" link and then scroll way down to see it.

Here's a piece of a screen shot from a portion near the end of the EXIF info for this image at flickr:

Notice that the "Color Temperature Auto" and "Color Temperature Measured" values are identical. That indicates that when the camera is set to "Auto WB" the measured values for Red, Green, and Blue are used to calculate the color temperature and tint that are then applied to the processed image (either the jpeg preview attached to the raw file, or a jpeg image).

The color temperature should be printed somewhere on the bulb itself. Try looking at the small print around the base. You may also consider using a colorimeter that is able to measure the ambient temperature.

While you can take a raw photo and see an estimated color temperature in raw processing software, the values can vary. Bulbs with temperatures that differ by only a few hundred K may not be distinguishable when "measured" by cameras not designed for colorimetry.

6
Relationship between tint-temp and magenta-green-blue-amber white balance corrections?
3
Is there a way to figure out a lamp's color temperature from a photo?