Do mount adapters change the apparent focal lengths of lenses?

I wanted more reach so I rented a Sigma 18-300mm lens for Canon to use with a Sigma MC11 adapter.

While testing this setup, I get the identical picture with the Sony lens at 200mm and the Sigma at 300mm.

Setting the Sigma lens to 200mm gives a wider angle photo compared with the Sony lens at 200mm. It seems like the 1.5 crop factor is revised when using an adapter.

Why does the Sigma lens appear to have different focal lengths from the Sony lens? Is it caused by the adapter?

The Sigma MC11 adapter has no optical elements between the lens and the camera body.

Since it contains no optics between the lens and the camera, The MC-11 does not alter the focal length of the lens.

Optically the image circle the lens is projecting onto the sensor should be identical for any specific lens when mounted on either camera.

The difference you are observing mostly comes down to the differences between the two lenses when they are focused at distances shorter than infinity.

Lens focal lengths are measured with the lens focused at infinity. When focused at shorter focus distances, different lenses can behave differently regarding field of view. One notorious example of a lens which expands the angle of view significantly when focused at closer distances is the AF-S Nikkor 70-200mm f/2.8G VR II. Focused at infinity it gives a 200mm angle of view (AoV). It gives a roughly 145mm AoV when set to 200mm and focused at the lens' minimum focus distance (MFD). In contrast, the competing Canon EF 70-200mm f/2.8 L IS II gives an approximately 195mm AoV at a similar MFD.

Focal lengths, particularly with zoom lenses, are approximated to the nearest "standard" number. You'll almost never see a lens marked as a 242mm or 246mm lens, even if that is their actual focal length. They'll both be sold as 250mm lenses. Lens makers tend to almost always round "up" on the long end and "down" on the wide angle end.

In the case of a lens such as the Sigma 18-300mm, which has a long end that is 16.7X longer than the wide end of the focal length range, certain compromises are made to fit such a wide range of focal lengths into a single zoom lens. This almost certainly includes focus breathing that causes the AoV to get wider as the lens is focused closer than infinity. It also includes a little exaggeration of the lens' actual focal lengths, even when focused at infinity. 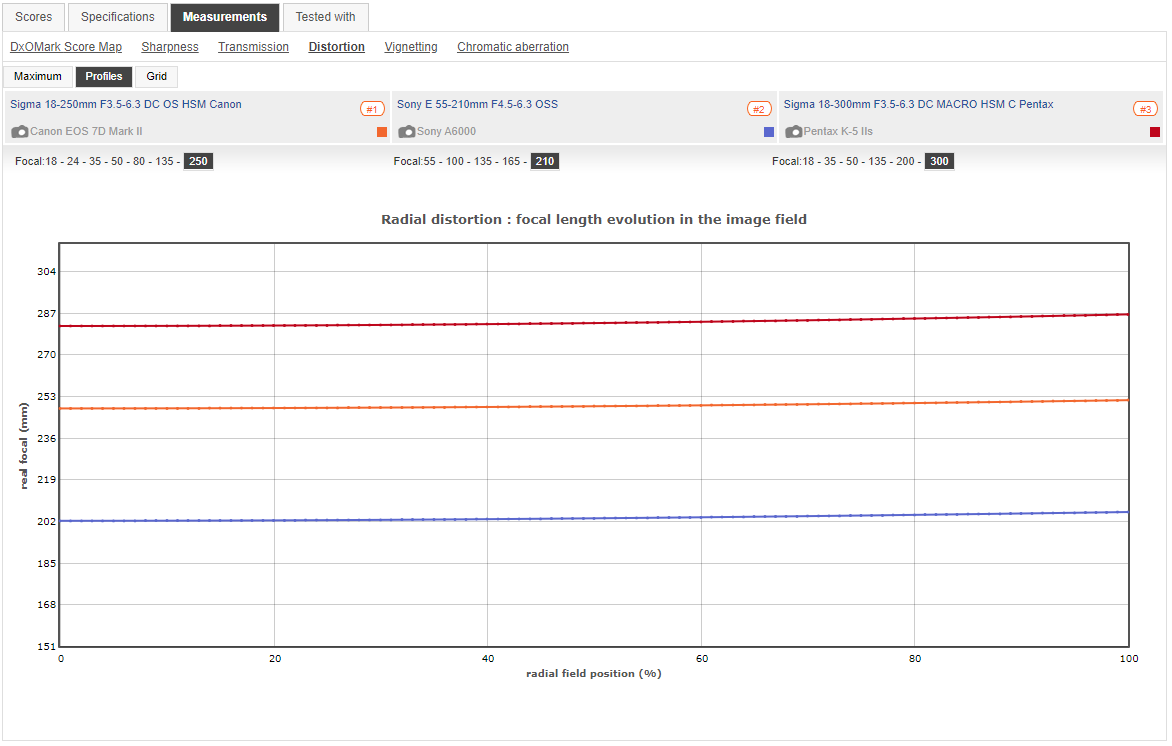 ¹ Please select 'Measurements → Distortion → Profiles' and the appropriate focal lengths for each lens to see the actual focal length measured at various points across the lens' field. The left side of the graph shows measurements made at the center of the image projected by the lens, the right side of the graph shows the measurements made near the edge of the lens' image circle, which would only be visible in the corners of a rectangular APS-C sensor (all three lenses were tested using APS-C cameras). The intervening points on the graph show measurements taken at various points between the center and edge of the lens' image circle. The corners of 1.5X APS-C sensors, such as the Sony α6500 and Pentax K5IIs, would be slightly further away from the center of the sensor than the corner of a 1.6X APS-C sensor as is found on Canon's APS-C cameras.

10
What's a good Nikon lens (DX) for a serious hobbyist landscape photographer?
12
Which Nikon lenses for family photography?
6
Do adapters exist for old lenses to Canon's DSLR mount?
5
Can I use old Minolta AF lenses on my new Canon?
1
Pentax DA L 55-300mm lens very soft--is it broken?
11
Why do Full Frame lenses and crop body lenses exhibit the same crop factor when used on a crop body camera?
3
Can screw-in wide angle adapters/converters produce decent quality results?
1
Equivalent focal length and aperture of 150mm medium format lens on a 35mm camera
2
For those that can afford fancy teleprimes is it preferred to use AF or MF for birds?
1
Using a modern lens (with electronics) manually?