Difference in light between new moon night and adjacent nights

I want to photograph bioluminescence in a remote area without light pollution. A dark sky is key.

The only light would be from the moon and the stars, so I'm aiming for the next new moon (fortunately in a week). Unfortunately, I have an event elsewhere on the night of the supermoon, so my best bet for a dark sky is the night before or the night after. 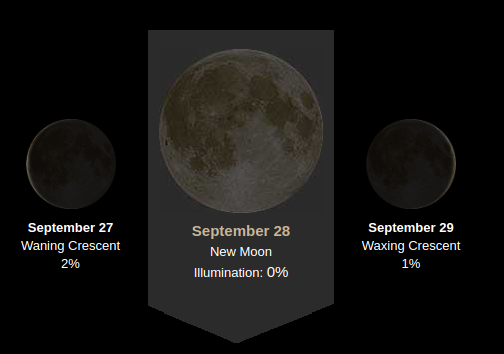 What would be the difference in perceived light from the moon among those three nights before?

Asking here since it seems more on-topic than on astronomy.SE, but feel free to migrate if that's not the case.

You don't need to do it during a new moon. It's enough that the moon is below the horizon.

New moon means the moon is approximately in the direction of the sun. One day before or after, it's very close to sun. It should be very easy to find a time when the moon is below the horizon.

If the moon is below the horizon, there is absolutely no perceived light coming from the moon.

The moon does not always appear in the night sky. The only time it does appear in the sky all night long is near the full moon, when it rises at about sunset and sets around sunrise. At other times in the lunar cycle the moon may rise during the day and set before the night is over, or it may rise after night has begun and set during the day. A new moon rises about the same time as the sun rises in the morning and sets about the same time the sun sets in the evening.

When the moon is new, it is very close to the sun in the sky. Under such a circumstance, the glow in the sky from the sun will be far brighter than that from the moon. Even after sunset, the sky remains brightened by the glow of the sun still shining on the upper atmosphere above ground locations that are shaded.

How long this glow remains is a function of ones latitude between the equator and the poles and the procession of the four seasons, both of which affect the angle of the sun's path in the sky and how far below the horizon the sun reaches overnight.

During summer at locations close to the poles, the sun's path is closer to horizontal than vertical as it rises, crosses the sky, and sets. In such locations on nights when the sun never falls more than 18° below the horizon overnight, the sky never gets dark enough to end astronomical twilight. Evening dusk leads directly to morning twilight. Inside the Arctic and Antarctic circles, the sun is never more than 22° below (or above) the horizon and stays above the horizon for half the year and its path is very close to horizontal as it moves across the sky.

At locations closer to the equator, darkness falls much more rapidly after sunset and lasts much closer to sunrise because the sun rises and sets at a near vertical angle and is nearly 180° below the horizon at midnight.

Localized data for your location (based on your SE profile).

Silicon Valley lies between 37° and 38° North. At that latitude in late September the sun's path is at an angle of about 63° to the horizon when it sets. Thus astronomical twilight lasts for roughly 87 minutes following sunset and begins the next morning roughly 87 minutes before sunrise.

You could have just as easily done this a week earlier on September 21 between the hours of 8:33 p.m. PDT when astronomical twilight following sunset ended and 11:57 p.m. PDT when the last quarter moon rose in the east. The only difference is that you only got a bit less than three hours of maximum darkness in the evening hours.

Not the answer you're looking for? Browse other questions tagged astrophotography night night-photography or ask your own question.

4
What is the best way to avoid moon and light glare in night exposures without using photo editing software
4
Which compact camera to shoot stars, moon and hopefully planets and sun?
1
What's the difference between a closed and open aperture diaphragm for night street photos?
8
What post processing should be done to my photographs of the aurora borealis to improve colours and impact?
9
What lens characteristics are important in star photography?
4
switched to RAW and seeing ugly light bands in Lightroom
4
The right aperture for capturing stars?
4
Is this band of light near the horizon light pollution or possibly airglow?
8
What makes the difference on partially and fully visible moon?
0
How to better enhance this star field image using Photoshop?