This is a followup question to Why is the blue channel the noisiest?. The simple answer to that question is that sensors are less sensitive to blue, and therefore require more amplification, which results in more noise. (This is compounded by the fact that typical scene illumination like sunlight or incandescent lamps are lacking in blue.)

So, why are sensors less sensitive to blue light?

Is this just the way many sensors right now are, or is it more fundamentally a "law" of photography?

This graph shows the natural spectral response of a CMOS sensor(copyright Kodak): 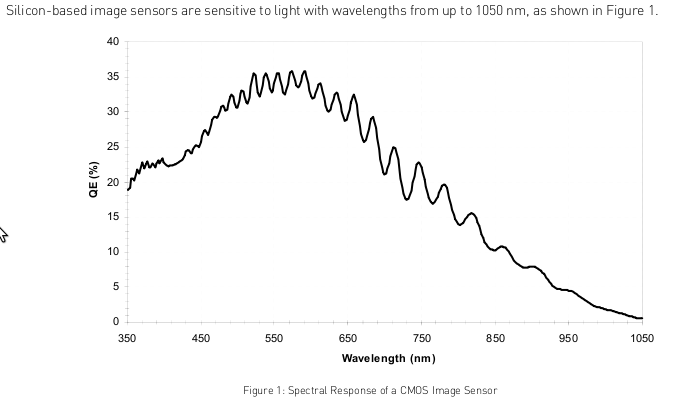 For reference, here is a table relating wavelength to colour(copyright Wikipedia): 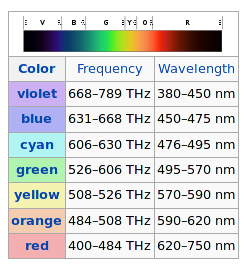 The monchrome signal from the CMOS sensor is converted to an RGB signal by siting a Bayer Colour Filter Array before the pixels. This produces, after interpolation, the colour response shown below(copyright Kodak). Note that the peak for blue at 460 nm is roughly 50% lower than the peak responses for red and green. The greater amplification required by this signal produces more noise. 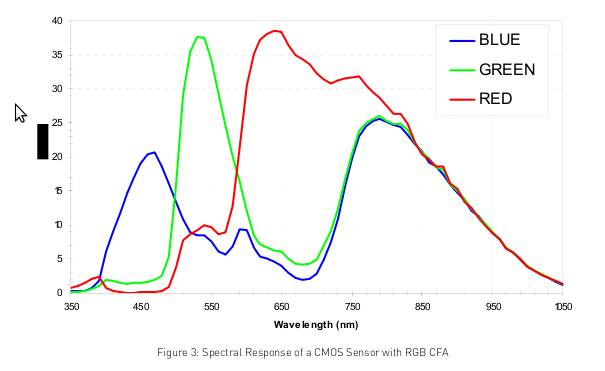 Compare this with the spectral sensitivity of the human eye, below.(copyright E Schubert)
Human eye sensitivity and photometric quantities 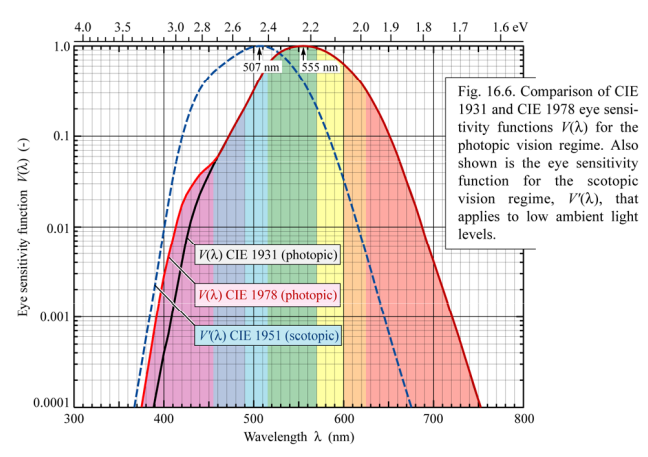 The cheapest sensor types by far are CCD and CMOS. They work by taking advantage of the bandgap phenomena of silicon. A sensor is optimized if it's tuned for a wavelength more powerful than the bandgap, but not too powerful. The badgap for silicon corresponds to a 1.1 um light. That's why cameras can typically see in the IR, and require an IR filter to block the signal out.

When the signal becomes much more powerful than the bandgap, sensitivity decreases. Instead of increasing the built up charge, it will tend to just pass through the system entirely.

Blue of the 3 channels has the shortest wavelength, and thus most energy. It's at the point that sensitivity is already decreasing. Further wavelengths, like the UV, are even less sensitive, and thus aren't even imaged (Hence why digital cameras don't need a UV filter)

Not the answer you're looking for? Browse other questions tagged sensor color light noise color-blue or ask your own question.

31
Why is the blue channel the noisiest?
4
Lanyard colours which are both high contrast and suitable for colour blind attendees

31
Why is the blue channel the noisiest?
3
Why does it seem like large sensors are necessary for good low-light performance?
41
Why don't cameras offer more than 3 colour channels? (Or do they?)
4
Are thermal imagers inherently more expensive than visible-light digital cameras?
3
Why does histogram not show color of object more strongly?
0
Is this color-correction explanation of images from a lunar lander gobbledegook?
4
Why are mid-day images dull?
5
Counteract strong blue light emission from a cheap LED
1
Why do typical imaging sensor colour filter spectral responses differ so much from the human eye spectral response?