Does a large scratch in an ND filter affect image quality?

The catch? It has a scratch starting from approximately the center of the filter, ending at near the edge. The length of the scratch is 1/3 of the filter diameter. The scratch thickness is very thin, so the area it covers is infinitesimal (so I don't really believe it would affect the 10-stop rating of the ND filter at all). It's nevertheless immediately visible whenever you see the filter, so quite a major scratch.

I'm not going to use the filter in cases where the sun is included in the picture. Also, I'm going to be using a lens hood with the filter. But, I might be using the filter with f/22, and at such a small aperture, I understand scratches invisible at around f/5 might become visible.

At the cheap price, the inner voice in my head says "GET IT!!!" but is there something I'm not understanding about the condition of the filter?

It is impossible to say without trying the filter on the lens you intend to use it on and under the conditions you are going to use the combination. It is IMHO impossible just by a visual inspection of the scratch to determine wether or not it will or may have impact on the pictures you are going to take.

If you can't try the filter before buying or are not able to return it if it does not work out for you, you must decide for yourself if you are willing to risk to pay money for potential garbage.

The job of the lens is to project an image of the outside world on the surface of the digital image sensor (or film). Our desire is a faithful image. To date, camera optics do a good job but residual aberrations (lens defects) are present for all lenses. The simple fact is, a lens aberration happens when the image-forming rays traverse the lens and some of them go astray. A scratch on the lens or mounted filter will cause some light rays to deviate. These stray rays will bathe the entire projected image with a small percentage of stray rays. This induces flare. Flare can be devastating. It reduces the contrast of the projected optical image.

You said the scratch is very thin, and therefore covers minimal area of the filter.

If the scratch is strictly in just the ND coating (possible, perhaps unlikely), then you probably couldn't determine any flare or other optical effects. In essence, the "scratch" would just be an absolute hard ND transition from 10-stops to 0, and to 10, over the width of the "scratch". But because the filter is mounted so close to the front element, you wouldn't even notice it. Even the hardest ND transition is spread out and blurred a bit. Especially as the focal length increases.

Now, in the more likely case that the scratch is somewhat into the depth of the filter glass — I say more likely, because the probability that a filter was scratched by something hard enough to scratch the ND deposition, but soft enough not to scratch glass (according to the Moh hardness scale) is low — then there will be some flare caused by the interaction of the light wave and the corners of the "crevasse" of the depth of the scratch. But still, the severity of the flare is dependent upon the depth of the scratch, and the sharpness of the transition from clear glass to the walls of the scratch. The effect is not numerically quantifiable, but described more in qualitative terms (i.e., how much the flare bloom is spread out, or affects the average light intensity in different regions of the image, etc.

I am a fan of experimenting by myself, and to encourage others to do it, so: Make a test! But do not go around scratching filters.

You can simulate a scratch on a normal filter putting, for example, a hair strand, or a really thin sticky tape. (Do not put a sticky tape on a coated filter)

A scratch could be more or less visible depending on different factors, like the focal length, the aperture and the distance from the lens, and some external ones like if a light is hitting directly into it.

Some filters are attached on a filter holder, and it increases a bit the distance from the lens. So make some tests.

If the scratch significantly damages the ND layer, the filter may be a write-off: as opposed to a front lens (where a scratch may be problematic depending on whether you are working with backlight or small apertures), an ND10 filter mostly blocks light. A scratch cutting through the ND coating will be like a scratch on the front lens, except that it is a thousand times brighter, no longer being blocked by the ND layer like the rest of the scene. If it cuts through half the ND layer, you end up with an ND5 which is about 30 times brighter than what an ND10 admits.

TL;DR: is the scratch visible? Perhaps, perhaps not.

I ended up buying the ND filter because I bought a lens from the same online used camera store and had to pay the shipping fee anyway due to the lens, so this filter was a very cheap purchase. The scratch is very hard to be photographed. It is visible to the naked eye if you rotate the filter in exactly the right orientation, but taking a photograph of the filter did not contain any hints of the scratch: 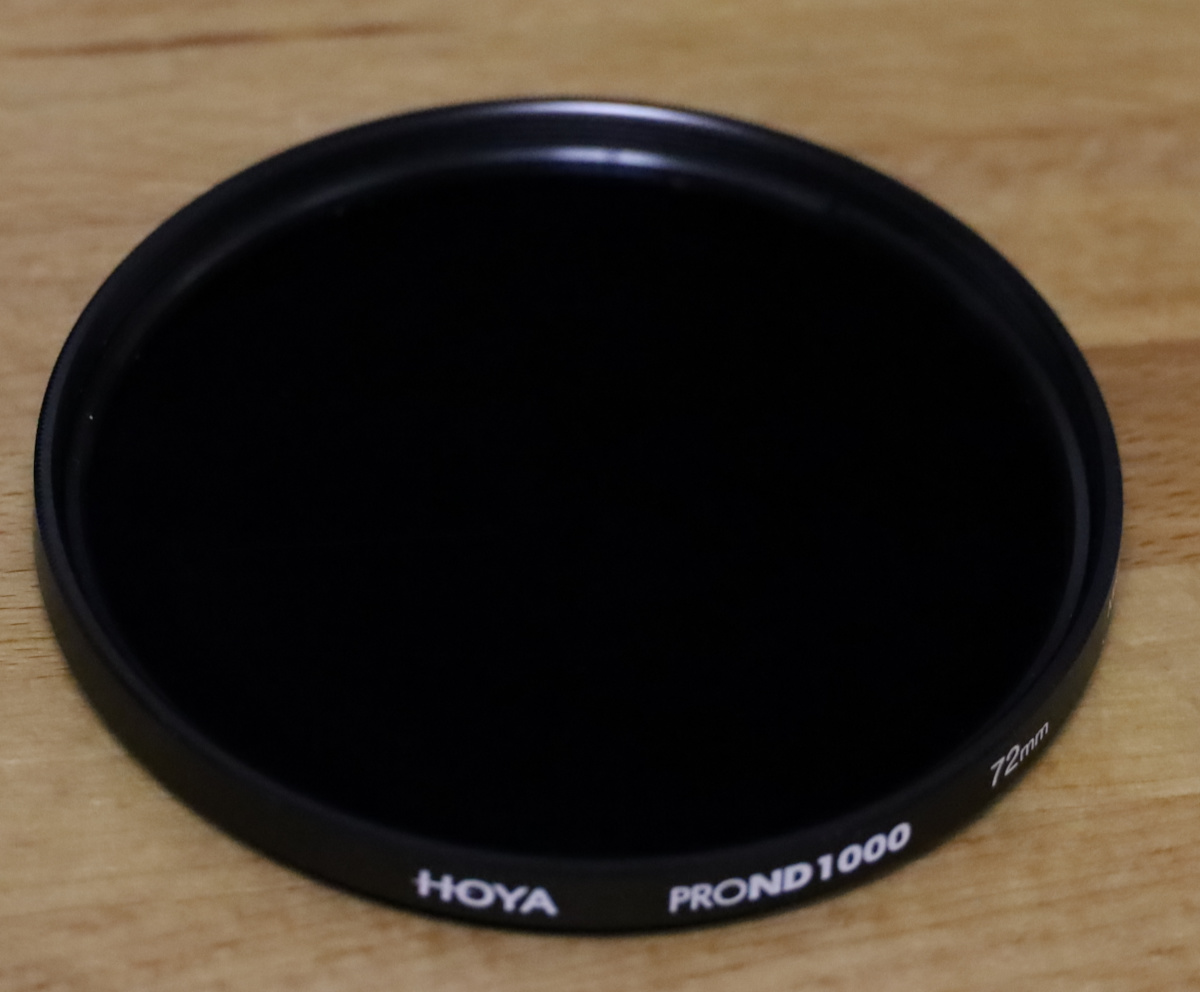 Taking a wide-angle photograph with the filter did not contain much hints of the scratch. I guess the reason is that the aperture diameter in millimeters is very small, so the area where the scratch is is unused. Or, perhaps I didn't look hard enough? 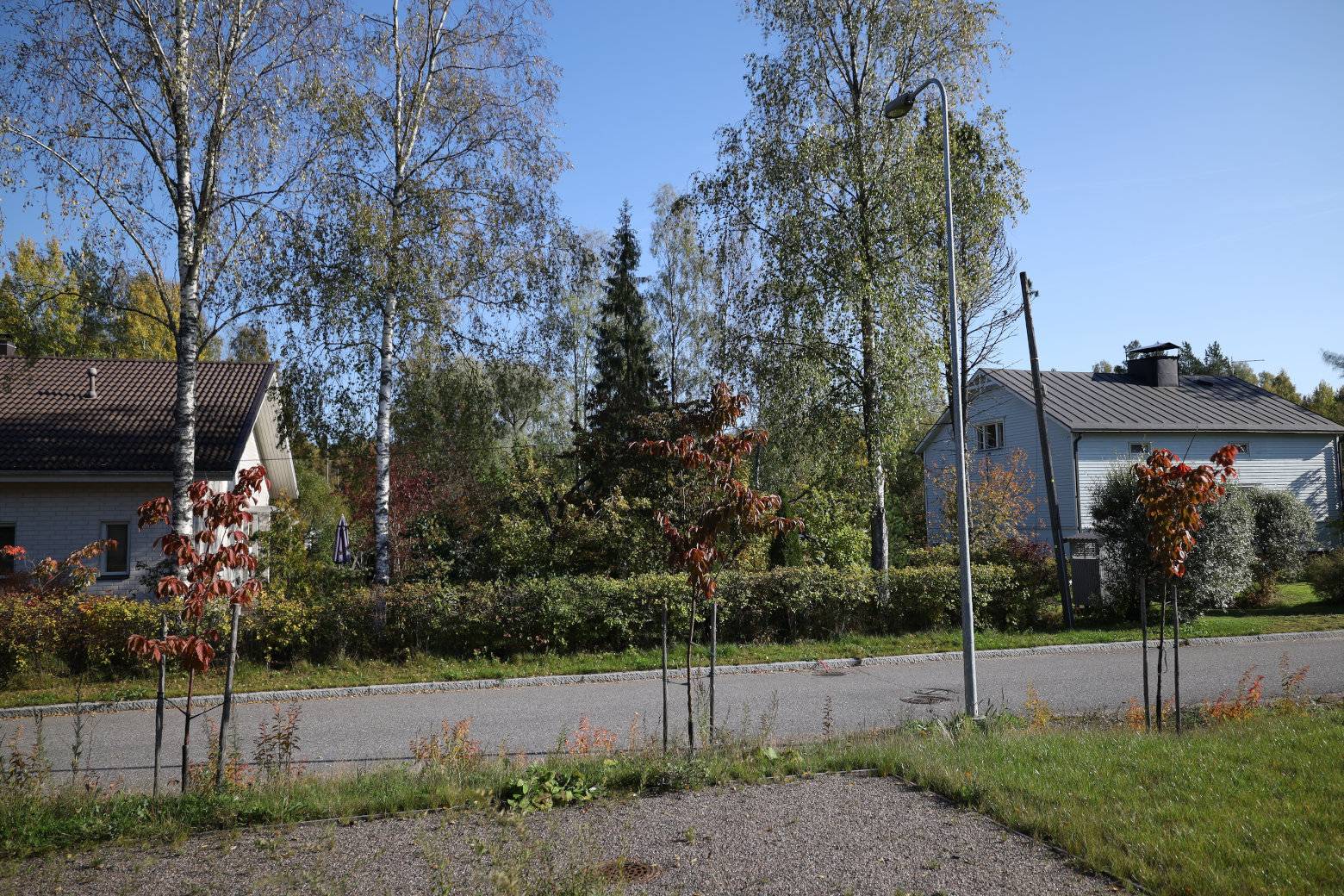 However, at telephoto end of this Canon RF 24-240mm lens wide open, there is something visible which could be the scratch (shake due to strong wind blowing the leaves, not due to camera shake -- I used a tripod with long exposure). 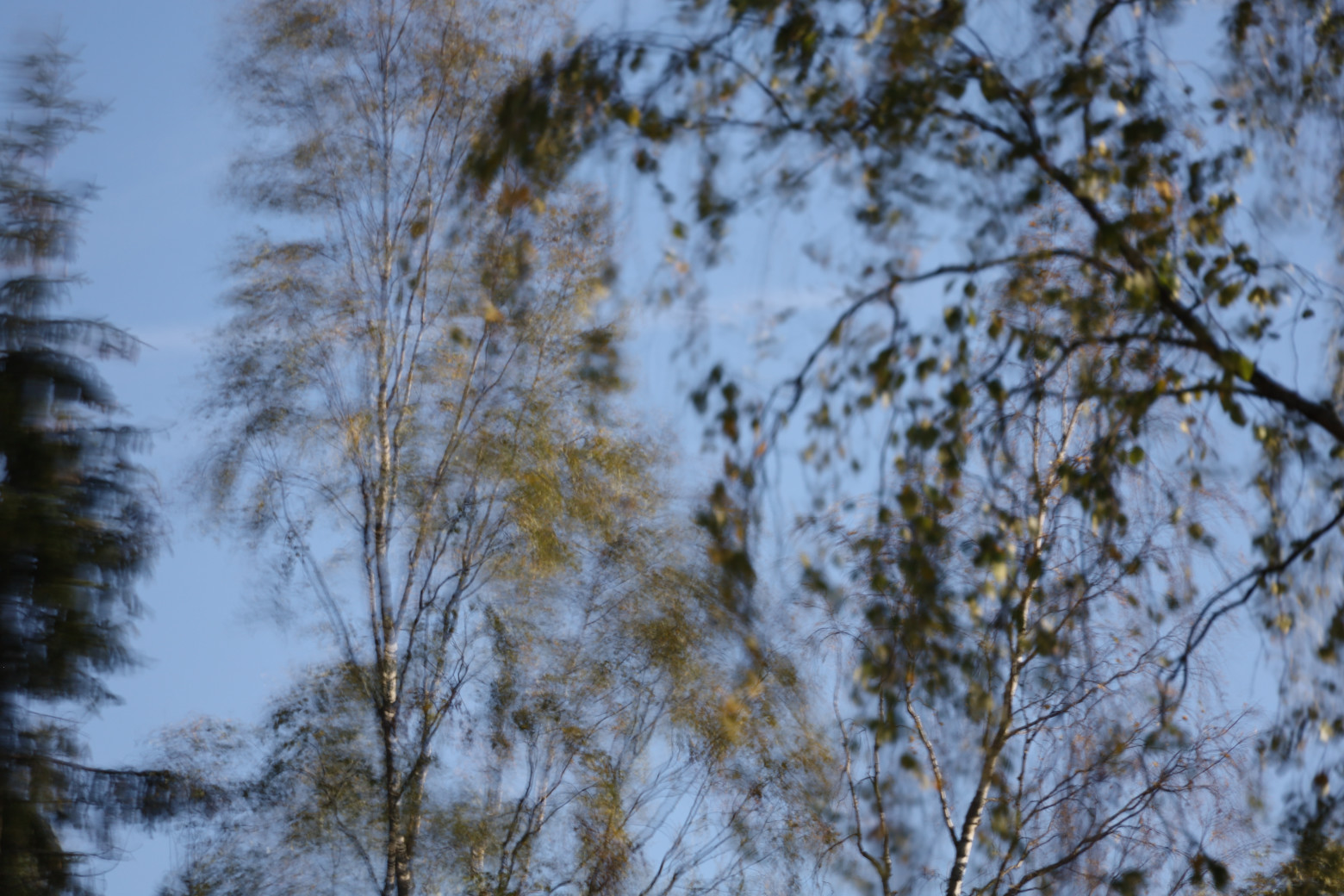 But I'm not 100% sure, because another telephoto photograph did not contain that line in the exact same location (I rotated the camera only slightly in the left/right direction), so it could be some trail left by an airplane: 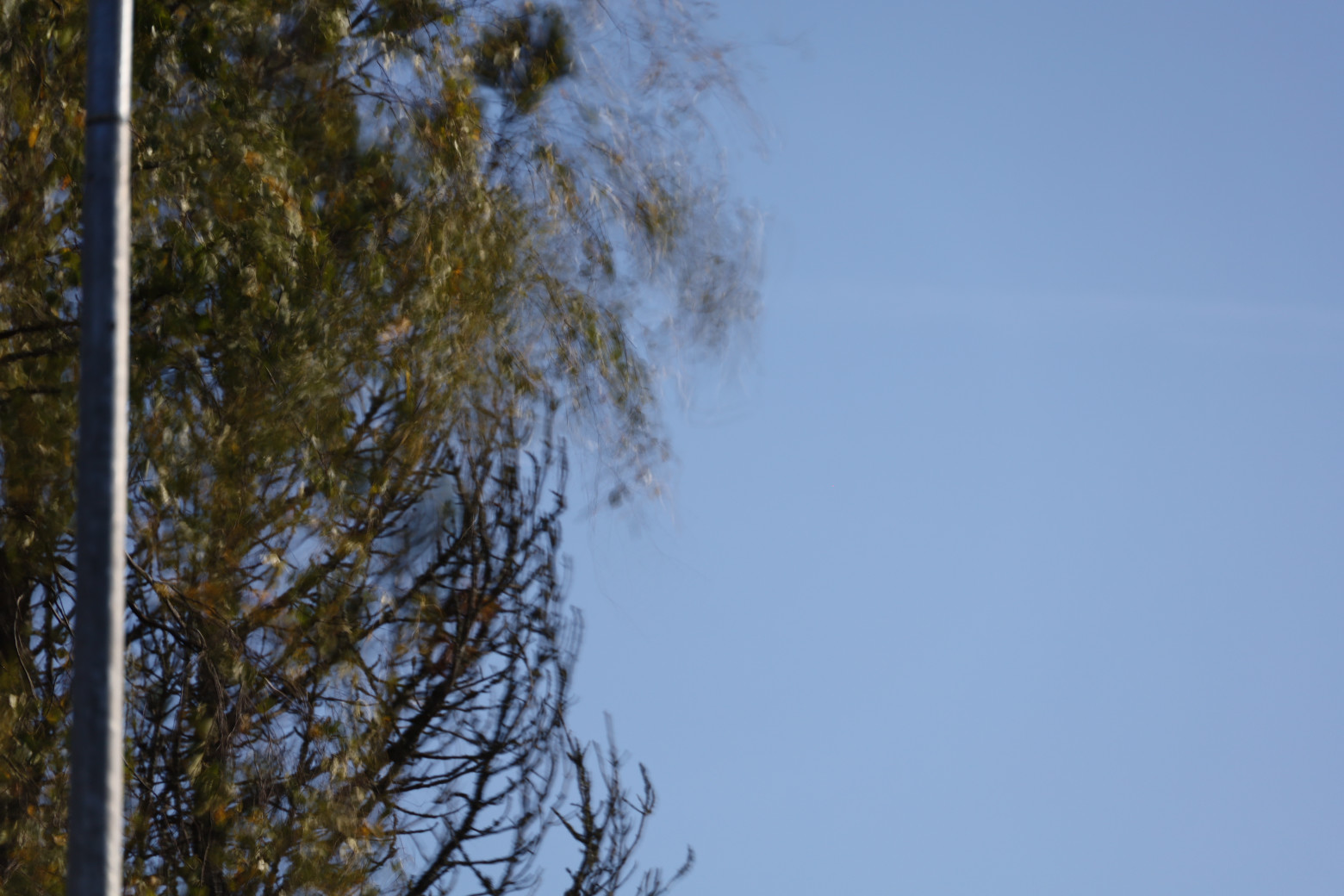 Thanks for everyone who answered, but there was really no other way to know all of the effects without purchasing the filter! It was only 10 euros (because the 5 euro postage fee I had to anyway pay to purchase a used lens).

I could experiment more by taking a photograph of flowing water with small aperture and long exposure, which is the kind of photograph this filter was purchased for. I think the filter might allow taking good photos without the scratch appearing in the picture, if you just use the camera in the right way. For some, it might be worth its cost; others may consider it useless.

Not the answer you're looking for? Browse other questions tagged filters equipment-damage neutral-density nd-filter scratches or ask your own question.

1
How do old lenses get dented just on the filter ring?
2
Where can I buy a 77mm 12 - 15 stop ND filter at a reasonable price.
6
How does a variable ND filter work?
1
Should I buy a used camera with a scratched anti-aliasing filter?
2
How can I tell if a scratch is directly on my sensor or on the filter above it?
6
LIDAR burnout; ways to check for damaging infrared lasers before shooting besides looking for posted warnings?
2
How will tiny scratches on rear element affect image quality?