Can I generate a colour photo from a RAW file in Capture One?

The camera is actually capable to change the film simulation after the fact. I can actually recreate a colour from the original pictures (as long as it is in raw format if I understand it correctly).

Now I have imported all the files into Capture One. Because I used the option to produce both jpeg and RAW files at the same time, I have both files present in the Catalog. The RAW file is consistent with the jpeg version of the same shot i.e. if the jpeg is B&W, the raw file is also B&W. 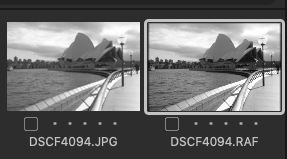 My question: Is CaptureOne capable to produce colour jpeg file from the RAW file, like what my camera can do in review mode?

Fuji and Capture one have a really nice feature in version 12 that lets Capture one start with editing your RAW with the film simulation option you set in camera. That is why the RAW image in capture one is showing as B&W right from import.

You can override this. On the "Colour" tool tab there is a tool window called "Base Characteristics". In that tool the "Curve" option lets you choose what film simulation C1 should use to render the image. By default it will be set to Auto which will use the film simulation set in camera. If you drop that menu down you will see the other film simulations available and you can choose another one that is not B&W. 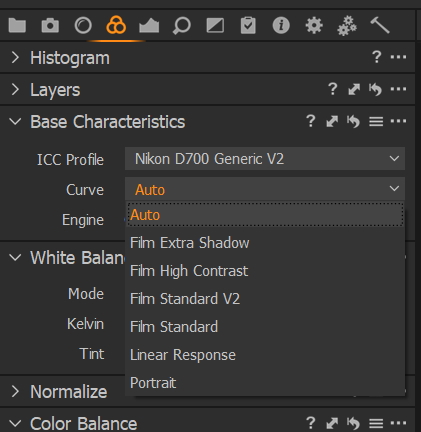 I don't have a supported Fuji camera so my choices are not as extensive as yours will be :(

After that you can edit your image from that starting point.

Edit to add a couple of references:

Yes. The black and white conversation is just done to the JPEG image and JPEG preview — the RAF file retains all of the color information.

I haven't used Capture One, but it's very possible that as soon as you actually open the RAW image in the conversion module rather than the catalog, you'll see a color image — Capture One's default conversion rather than the embedded preview. Or, it's possible that the software will read the film simulation from the metadata and apply a similar default — but in that case, nothing will stop you from changing it.

Not the answer you're looking for? Browse other questions tagged capture-one fujifilm-x-t20 or ask your own question.