Is HSS open or closed loop? Does it work in complete darkness?

Some cameras and flashes have support for high-speed-sync for using flash with such high shutter speeds that the shutter is never fully open at the same time in all locations across the sensor area. See animation here for how fast shutter speeds work: If a rolling shutter travels from top to bottom, why does this image seem to show skew in the other direction?

Is this high-speed sync a closed loop or an open loop process? By this I mean: how does the camera decide when to do the next small flash? It has to be very accurately determined, or else some areas (horizontal stripes) may be exposed twice and/or not exposed at all.

One way the high-speed-sync could be implemented is that if there's some light (not complete darkness), the camera uses continuous sensor readout to determine when the shutter curtain moves past the last horizontal line that was exposed. Then the next small flash is properly synced to the previous small flash, thus avoiding the problem of horizontal stripes exposed twice and/or not exposed at all.

Now, if the HSS is implemented by a closed loop continuous sensor readout, it wouldn't work in complete 100% darkness. Is this actually the case? Or can you use HSS if there is absolutely no light at all (like in a darkroom)?

You make the assumption that light drops significantly between two flashes. This isn't true: 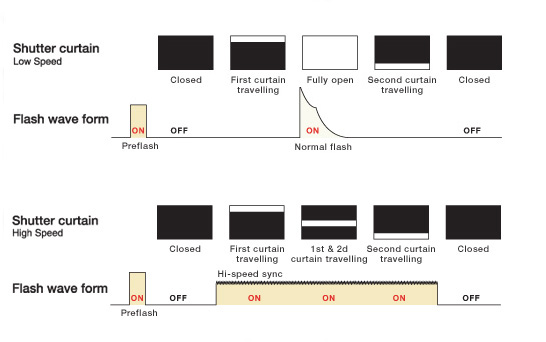 Since doing this properly is likely dependent on the light dropout characteristic of the flash bulb, it can be done as an open-loop.

Is HSS open or closed loop?

It is open loop. The flash firing and synchronization is not performed by measuring the flash's light incident on the sensor.

HSS is camera-manufacturer specific, requiring the flash to understand the camera's proprietary signaling and timing commands.

Does it work in complete darkness?

However, even if it were closed loop via the imaging sensor as the feedback element, that would not, a priori, preclude any HSS system from working. By analogy, closed loop stepper motor control works with widely varying loads at motor startup. If the feedback controller has fast enough slew control, a nominally safe starting speed/torque can be used until the feedback loop can establish what the (commanded – measured) difference is. Similarly, a camera could measure and establish the flash's delay and intensity variation at the initial stages of shutter transition, if the camera were designed to do so. But it's moot, since the operation is open-loop.

Many artificial light sources are actually pulsed and not continuous, such as LED's and fluorescent bulbs. They simply pulse at a rate fast enough so that the perception of them is that they are continuous. That is all that HSS is doing.

In order to do that it has to provide all of the light pulses from a single capacitor charge, so the max power is reduced to ~ 1/4 (typically). In most implementations there is no consideration for the shutter/transit speed because it is unnecessary.

Not the answer you're looking for? Browse other questions tagged flash shutter high-speed-sync or ask your own question.

11
What factors prevent camera sync speeds from being faster?
3
Disadvantages of always setting flash sync to 1/320s (Auto FP)?
0
High Speed Sync with Canon 7D and Sigma EF-610 DG Super
11
Is there no crossover point where shutter speed overtakes flash duration?
0
Can anybody suggest a camera and flash combination for high speed, fast recycle time, night time photography?
3
What is Hi-Sync flash and how does it differ from HSS?
2
Which Canon DSLRs support High Speed Sync and what other requirements are there?
1
Panasonic FZ1000: Flash FP high-speed sync oddities, 1/16000s mechanical shutter?
2
Is my image exposure off due to shutter problems?