What is an L plate?

While perusing the local Craigslist photo/video listings, I saw someone trying to sell something called an L-plate. What the heck is an L-plate?

Typically when attaching a camera to a tripod it is designed to be attached in the landscape position via the threads on the bottom of the camera. This potentially creates three problems for the photographer if/when the photographer wants to rotate the camera into the portrait orientation: 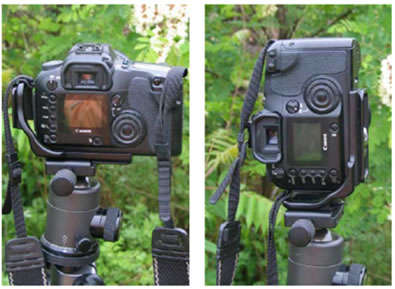 At its essence it is a device that allows the photographer to rotate the camera from landscape to portrait orientation by simply detaching the quick release plate on the bottom and attaching the camera again via a second quick-release plate positioned on the side of the L plate and camera. This has the advantage of keeping the camera positioned squarely over the center of the tripod (thus ensuring stability and vibration dampening regardless of camera orientation, as well as ensuring that tripod handles aren't extended such that they interfere with the rest of the tripod), and meaning that the photographer doesn't have to recompose his shot once the camera has been rotated, because the camera hasn't been shifted down and to the left.

While there are several companies that make 'L Bracket' products, and there are various tutorials available to roll your own, the phrase and the product 'L Plate' is most commonly associated specifically with products manufactured by the company Really Right Stuff.

An L-plate is a quick release plate that extends to the side of the camera, offering two mounting options: landscape and portrait. Really Right Stuff sells them, and seems to be the most popular brand (if there are any other brands at all).

They've got a video explaining them and showing why you might want one, which basically boils down to "you can attach your camera to a tripod in portrait orientation."

Not the answer you're looking for? Browse other questions tagged tripod-heads quick-release or ask your own question.

7
Which tripod heads accept the Arca-Swiss plate system?
1
What would be a cheap and good bracket for a Markins Q-Ball Q20?
0
Grinding an RRS plate to fit new body
6
Quick-Release Plate Materials
0
Fotopro monopod tilt head — available in the USA?
1
Plate Screw with load-bearing eye
0
What is this part of a tripod head for?
3
Which are the most common quick release plate systems?
3
Name of cleat-style tripod mounting head