How can I photograph an item which glows on a white background, without losing its glow?

Is there a simple way to photograph/edit this in order to a) show the item and all its details in bright light AND b) still show the glow emitted from his tummy?

I would greatly appreciate your suggestions.

There are lots of other ways to accomplish this, but if the background lighting is too strong, back it down.

Sure, you can combine two photographs with different exposures, but that will not accurately represent the object, and worse, it will not pleasingly showcase the glow-in-the-dark tummy.

A better option would be to just show both images, a "day" and a "night" version side by side.

Is there a simple way to photograph/edit this in order to a) show the item and all its details in bright light AND b) still show the glow emitted from his tummy?

Sure. Use lower brightness levels for your lightbox setup and expose for longer. This will equalize the intensity of the lights illuminating your lightbox and the light inside the teddy bear.

If you are using speedlights or strobes, turn their power all the way down. The longer exposure time will not have influence on the very short duration strobes, but it will collect more light from the constantly on glow of the teddy bears internal light. You may also need to increase the camera's ISO setting.

Of course exposing longer will probably require you to have the camera on a solid tripod. If you're not already doing that, you'll need to add a tripod and a way to trigger your camera without moving it by directly pressing the shutter button. I find a wired cable release to be the best choice for doing studio work on a tripod. Others prefer wireless remotes. Which works best for you may come down to which your camera can accommodate.

An amateur as well.

You might try spot metering on the lighted tummy or on the tummy slightly away from the LED location. The white background will likely be blown out, but you might be able to fix it in post.

Post production editing. Take two shots, one in full light, one in dim light, and enhance the full light picture by transplanting the LEDs from the dim light one.

Let's take an example of a candle. Here's one on a dark background: 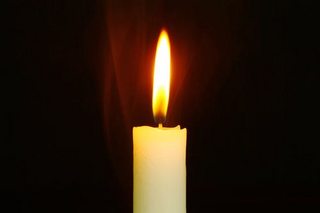 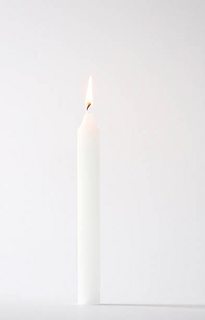 Doesn't quite have the same "glow" does it?

The difference is in our perception. Both are light sources, just like your LED's. But, how bright those light sources are is in direct contrast with every other source in the image. In the high key example, there's obviously much more light being thrown onto the scene - so the candle light is diminished in comparison.

The only way to get your LED's to "glow" is to make sure that they are one of the brightest things in the scene. This is not possible using a high key background. Even if you took a high key and low key and merged them, the glow would be diminished in our perception of it.

There isn't a way to show the glow on a white background. If you want to highlight the glow, then change your style:

Add the glow was a yellow/orange colour to make the glow appear on a white background.

You can do this by hand or take 2 exposures and try to add the glow as a layer effect.