What's the biggest difference between these two photos of large animals? 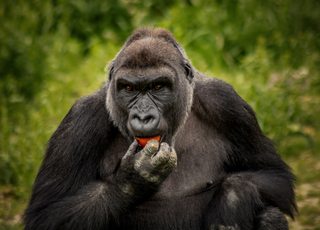 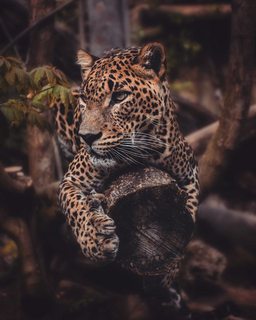 The first photo (Gorilla) is one I took, whereas the second photo was taken by a more serious (not sure if professional) photographer.

The second photo is clearly better but I'm not sure what the biggest factor is, or which of the following three options would have the most effect in making my photos look as good as his.

In this instance I'm not concerned about the skill of the photographer as I only do it as a hobby.

Both crop-sensors so I'm assuming there's not a HUGE amount of difference here?

Other than cropping, the only post-processing I did was with the Camera Raw Filter. I can't remember exactly what I did but it would've been along the line of:

EDIT Thanks for all your suggestions. I went and took a picture of a leopard myself (Used the Canon nifty fifty) :) 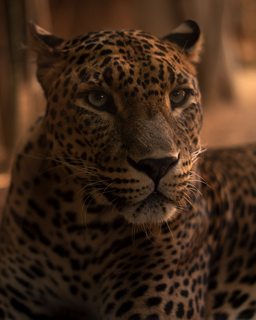 The second picture is 'better' mainly because it's a glamorous big cat looking glamorous and dangerous. It's better for the same reason pictures of James Dean are better than pictures of me.

Compositionally I like the fact that the leopard picture is portrait rather than landscape (this is mostly personal preference however) and that the whole cat is in the frame, with narrow-enough DoF to mean that you just get hints of most of it. I like the leaves in the RHS of the leopard picture. In your picture most of the gorilla is missing, and in particular the left hand is missing which annoys me.

For the gorilla I don't think you could have had all of it (hmm, I feel bad calling a gorilla 'it' but not a leopard, which is linguistically interesting) in the frame while keeping attention on the whatever is being eaten which is the focal point of the image. It might have been better to be closer (or zoom more) and just frame the interesting part. Perhaps something like this: 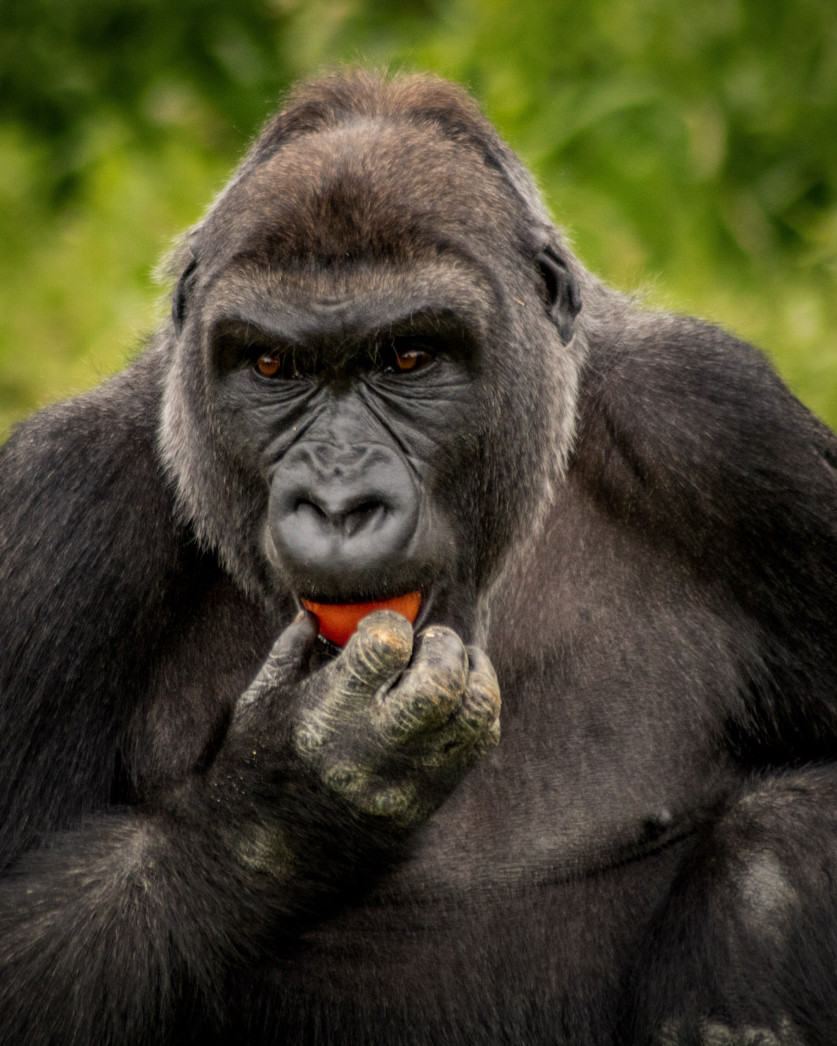 Although I spent approximately zero time thinking about composition when doing this crop (it wants more space at the top I think, but that's the top of the original frame, so there's none to be had). However I'm of the rather pretentious print-the-whole-frame-with-a-black-line-showing-the-rebate school generally so I feel bad about crops. Again that's just me.

That crop as it is is not really sharp enough even for me, especially the eyes: I don't know if that's because I'm doing it from an already-downsized JPEG &/or imgur is further lowering the quality. But it may be there just isn't enough resolution to be had, in which case the answer is a longer lens or (better!) being closer ('if your pictures aren't good enough, you're not close enough'). Or it might be the focus is wrong but I don't think so.

In terms of image quality and all that stuff: don't care, your picture is fine. Again, that's just me: I like pictures & the stories they tell. I'd be very pleased if I'd taken that picture.

(And of course, I'm always tempted to say that everything looks better in black and white: 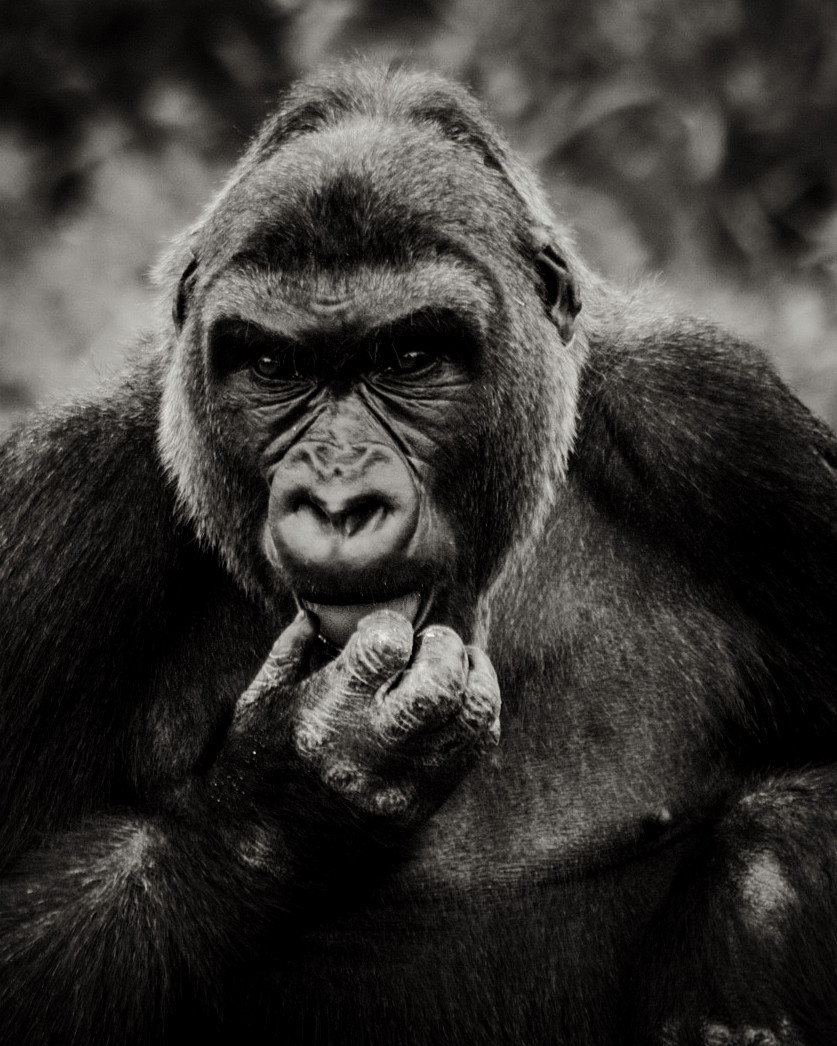 even with a very rudimentary conversion. Except it doesn't look better: it looks more 'filmy' because the slight unsharpness now looks a bit like B/W 35mm film, but it is missing the colour of the thing being eaten which is critical to the image: so this needs to be in colour. So I'm wrong about that.)

Short answer because there are many good explanations already:

There is an additional element not taken into account in other answers, the color grading.

First, let us compare the two histograms. Here is the kitty one. 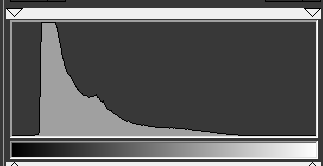 And here is your photo's 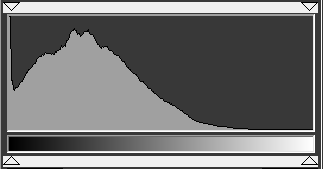 As you can see, the kitty's one, even if there are zones that are clearly on a dark shadow, like behind the trunks you do not have any black.

This is perceived as a higher dynamic range image. These days can be just trendy, but adjusting it on your image gives a more cinematic look.

I applied an aggressive sharpening not even done in Ps, so do not be afraid to use it if it helps your photo. I personally like to see the contrasted hairs. But let us focus on the color grading. 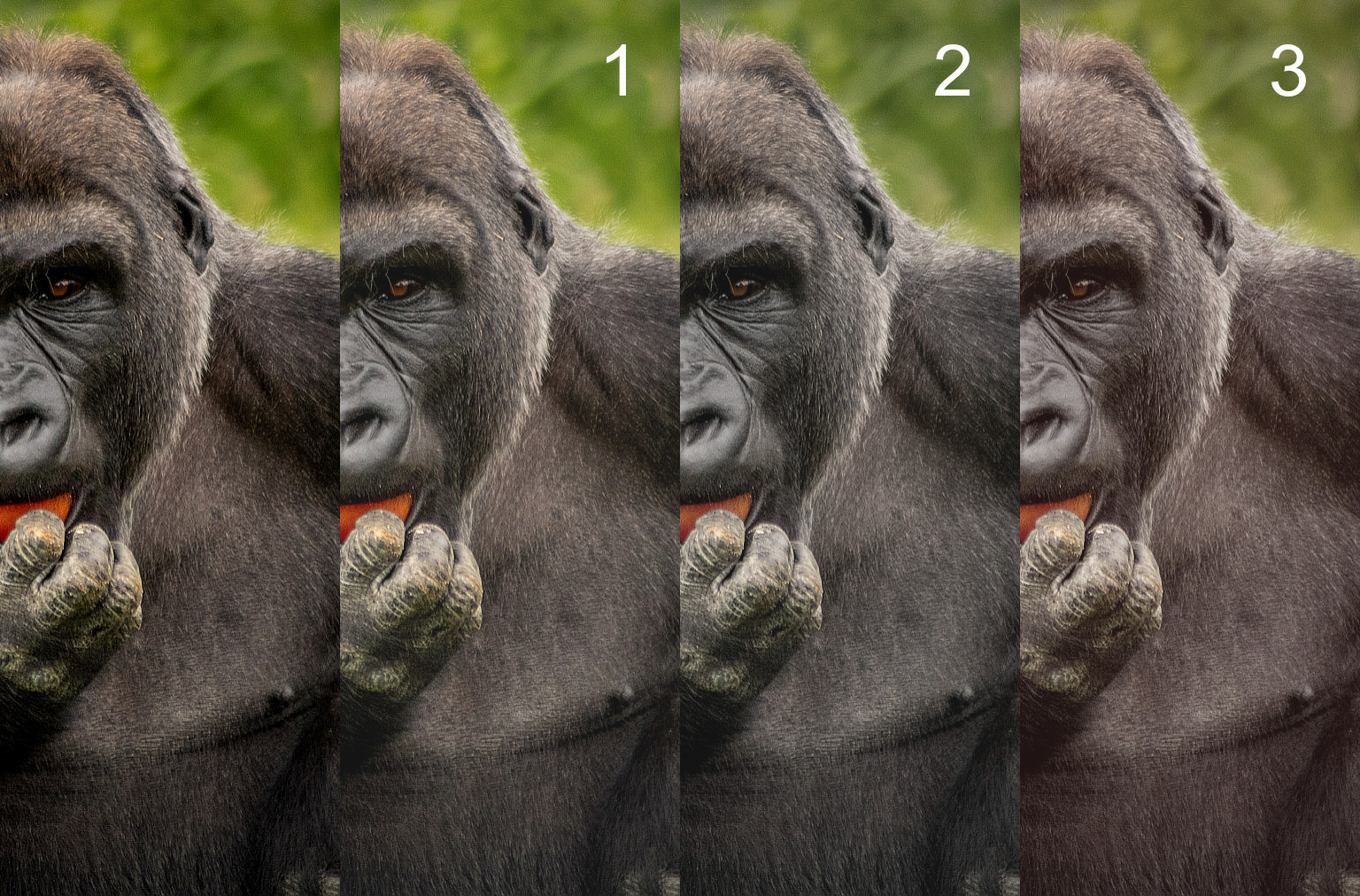 Now both images could be from the same series of animal photos. 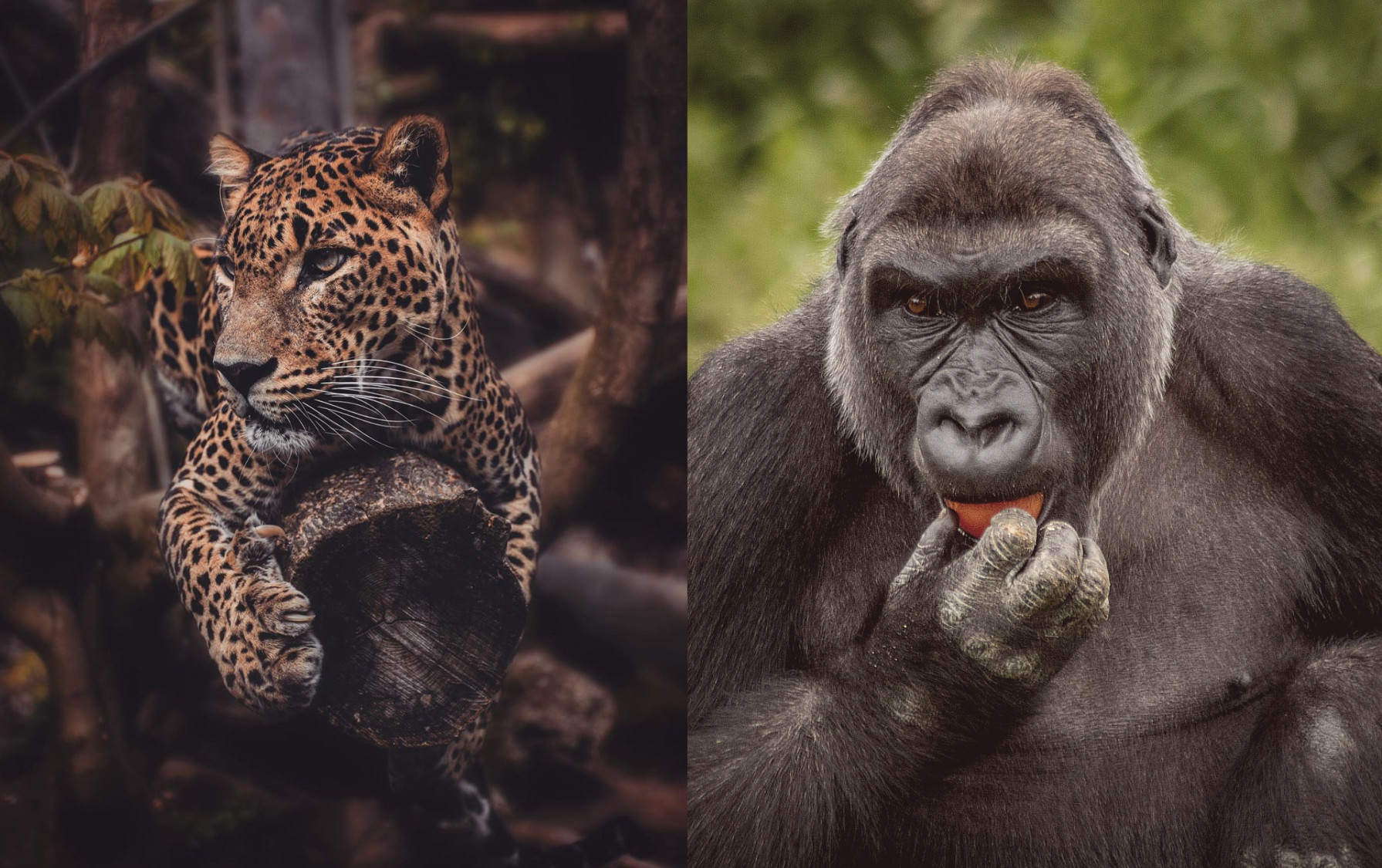 The second photo is much sharper than the first. This is probably a combination of:

Many differences have been suggested already, many of which I agree with, breifly.

but here's the new one.

Gorilla could be 'helped' the same way in post, so here's my crop & sharpen [2 mins effort, you could do better from the original].

I pushed him over a bit too, so he's looking across the frame rather than out of it.
I think it makes him look more like he's contemplating his next move rather than his next snack.

Cropping this tight also heightens the depth of the subject, even though the long lens & enforced distance has somewhat flattened the apparent perspective. 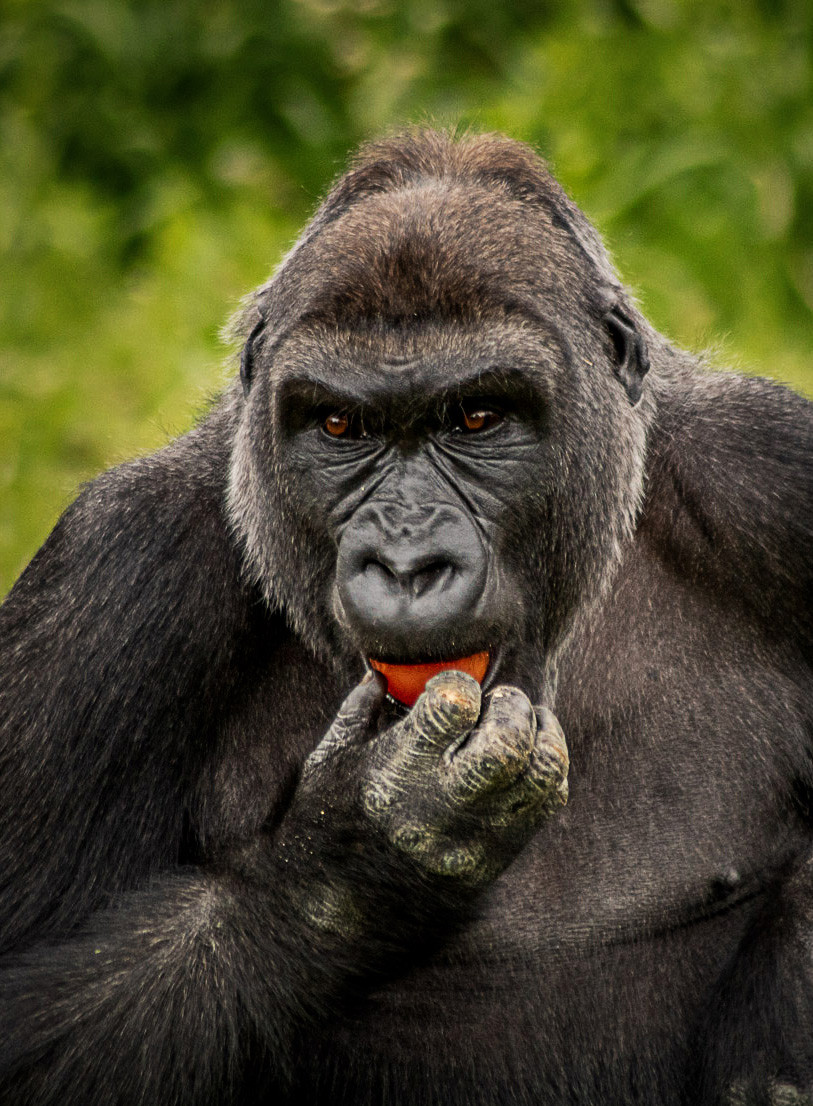 I see the following:

In contrast, the Leopard

I took the symmetry out of it in an unusual way (try the head on the right side, it'll not be the same). This opens some possible questions: didn't the photographer have more time to prepare? What's on the left side that we can't see? Sharpening also helps, I think (I sharpened the left two thirds, you can see the edge through the nose). 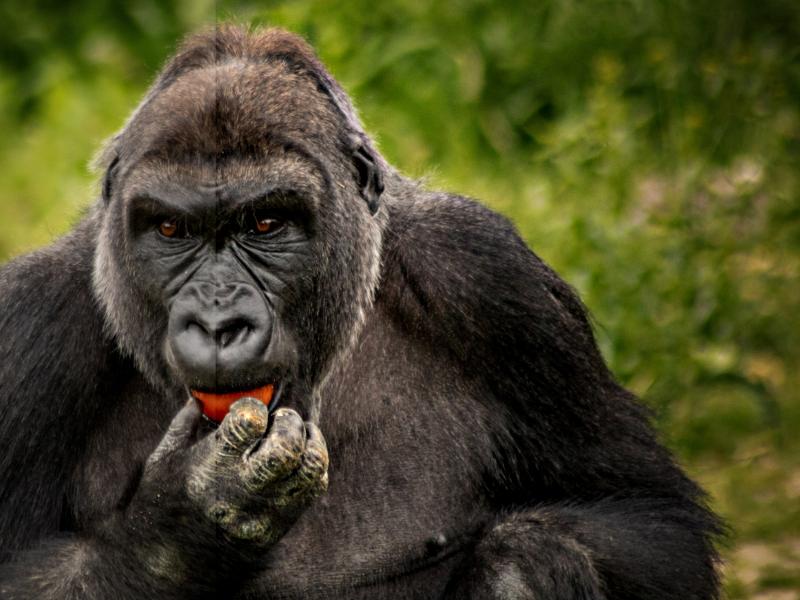 I think one thing that is different is the muted look on the picture of the leopard.
Maybe it's intentionally muted in post processing or maybe the scene is just a bit muted there.

On the other hand the gorilla shot is colorful and vibrant.

Maybe the colorful scen makes the gorilla look less dangerous?
I mean lots of colors make me think of children and children's toys.

The dark scen and the leopard almost hiding in the colors of the background perhaps makes you more scared when you notice that it's not all branches and leaves in the picture.

Squint your eyes at the pictures. The gorilla is too dark and becomes a jumble whereas the cat is plenty bright. If you look at the histogram of the image, you can see the cat photographer had originally taken the image too dark and someone used a "brightness" control to lighten it. (However, whoever edited it is not a professional as they reduced the dynamic range when they did so; they should have used Curves instead of Brightness so that blacks would stay black instead of turning dark grey).

You mentioned you like "dramatic" pictures, so here is an example of how you could increase the brightness while also sharpening the contrast and colors. 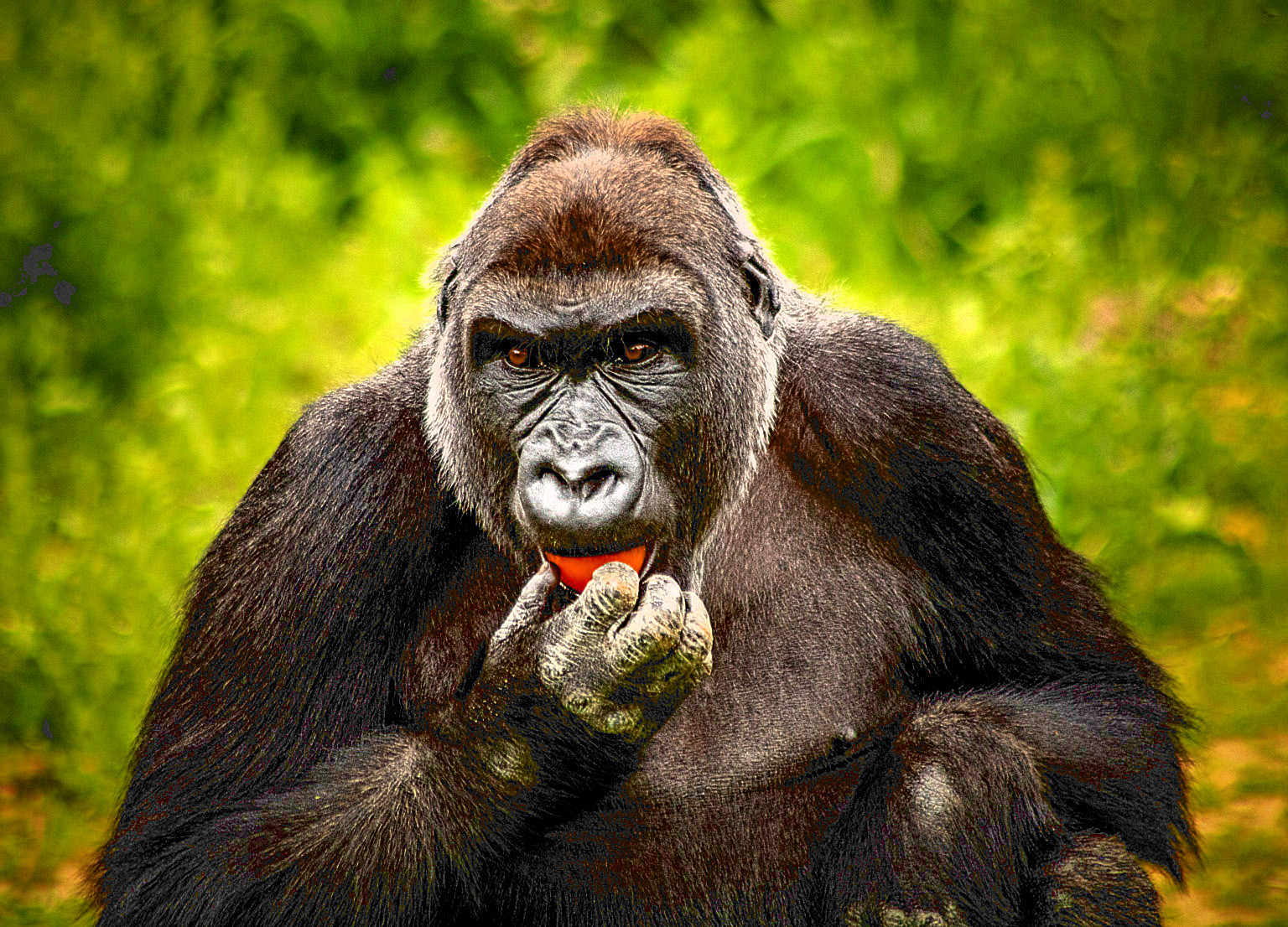 Obviously, you could do a more subtle modification to the image, if you wished. The method I used for this was to apply a "LOMO" filter, followed by Auto-Contrast Enhancement. For fun, I used Richardson-Lucy Sharpening to make the hair and eyes pop. Although probably not necessary, I also added a layer mask, based on the B-channel of the LAB-decomposition, to keep sharpening artifacts from leaking into the background greenery.

Leopard: The main reason this is a better photo, is the leopard looks relaxed and seems like you can reach out and touch it. People can relate to the feeling of the leopard. The tones are warm and harmonious. (People love cats).

Gorilla: The gorilla looks distant. It also looks slightly manic. The composition of the photo is not as good as the leopard. The strong green (and plain) background is distracting. To improve the photo, I would crop closer.

Lastly, the photo would be better if the gorilla was looking at the camera, perhaps the lower body was seen more, the fruit was messy, another gorilla was missing out on the food... or something.

My first reaction to this question was 'WHICH one does he think is better?'

Is one technically superior? Hard to tell on screen.

Not the answer you're looking for? Browse other questions tagged lens post-processing body or ask your own question.