I have a colour standard card QP 201 which I am hoping to use to calibrate gray values in some scientific photos. For this purpose I will need to know the percentage gray values of the gray squares (e.g. 18% gray, 95% gray), but the card does not come with that information. The closest that I can find is this chart - how do these RGB values correspond to percentages? Is it simply a linear transformation, so that 255 equals 100%, hence the corner squares (RGB 179, 180, 178) would be 70% gray?

Photography is approaching 200 years of age, first permanent image Joseph Niepce 1826. The digital era starts in 1975 when Steven Sasson at Kodak invented the first digital camera. In the early days, exactly how to expose and develop was hit and miss. It was Hurter & Driffield who conceived the science of Sensitometry. This is the science of how film and photo paper react to exposure and chemical developing. Thus applying numerical values to shades of gray or hues is rooted in this science. Their math is the basis of exposure calibration and film speed.

Sensitometry (stemming from Hurter & Driffield) is the science of exposing film (now digital) using precise exposure changes, usually 1 stop or ½ f-stop. Typically a black & white film is exposed to make a gray scale --- clear film to max black. Each step is measured by passing a beam of light of known strength through the developed film. The amount of light blocked due to the density of each step is recorded. The results, called film density, is graphed on ruled paper. The result is a plot of the film’s response to exposure and development.

If the math used to record the density of each step is ordinary -- 10 base numbers, the graph is too long to be practical (several yards long). This is because each f-stop is a 2x change in exposure, so after fourteen steps, the scale is 8,192 the first step. To make the graph practical, some say elegant, logarithmic notation is used.

Sorry no time or space for a logarithmic lesson, but here is a taste of the math of photography:

The key tone of photo film and paper is a gray patch with a density of 0.75 (log base 10). This is middle gray of the scale of film and photo print paper (battleship gray).

A patch of film with a density of 0.75 is the center value of the tonal range of a pictorial black & white negative (patch # 7 of photo below) A print made from this negative, properly exposed on photo paper and properly developed yields a gray patch, we say zone V, the pivotal point, and both properly exposed film and a print of that film have the same density. The film’s density is 0.75 transmission density, the print’s density is 0.75 reflected density. This is the value of the 18% gray card used to calibrate exposure meters. 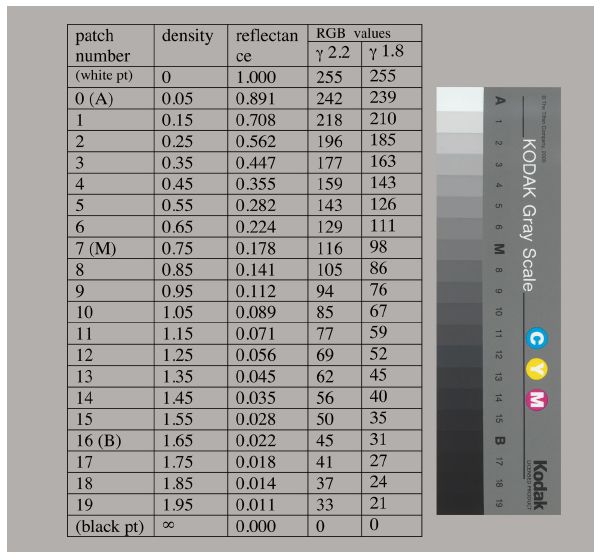 Your example square is actually about 53%.

Upon reference image download exiftool shows that the ICC profile is ProPhoto RGB:

With that knowledge and Colour, it is possible to decode the values as given in your image and convert them to Luminance values which for practical purposes would be equivalent to reflectance values for the various gray swatches:

I made a Google Colab notebook so that you don't need to install Colour on your machine: https://colab.research.google.com/drive/1OuaAnxqct3E4OAbddcA74vcNF4uwQyx4

Not the answer you're looking for? Browse other questions tagged exposure color-management gray-card or ask your own question.

26
What is the 18% gray tone, and how do I make a 18% gray card in Photoshop?
24
How do you use a gray card?
16
What's a good ad-hoc replacement for a gray card?
5
How can I ensure my gray card is color-accurate?
14
Gray card angle during custom white balance calibration - does it matter?
4
How can several gray card shots help with metamerism?
16
What is the purpose of gamma correction in today's screens and how does it relate to graphics and photography?
6
Why do gray cards come with a black card and a white card?
0
why exposing with 18% gray card does not give IRE near 40?