How can I avoid those pink/purple lines in my portrait photos?

In my portrait photos, these pink/purple lines are appearing, usually on the edges. I am using Nikon D3300 with a 50mm lens. Why are they appearing, and how can I avoid them? 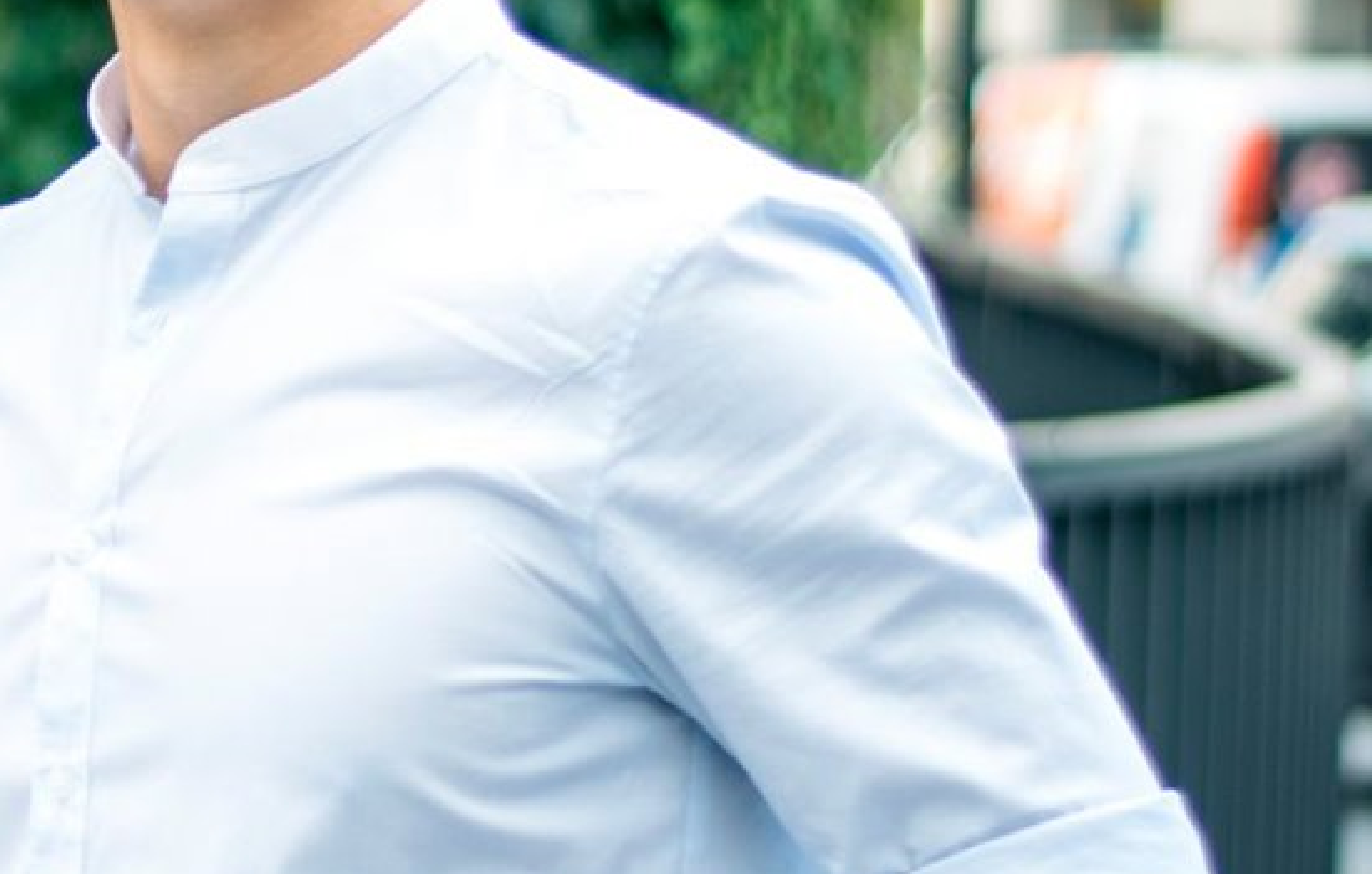 As established in comments, it's chromatic aberration, specifically purple fringing which you see mostly at high contrast edges in out of focus areas.

You can mitigate it by closing down the aperture a bit, but after the fact you can reduce the effect somewhat in post-processing.

Nikon's own ViewNX-i is reasonably good at dealing with some of this, from the original RAW [.NEF] file, otherwise Photoshop's Camera RAW editor can have a fair go at de-fringing. [Camera RAW can work on jpg & png too, not just raw files.]

You'd do better from the original, but here's a rough attempt… 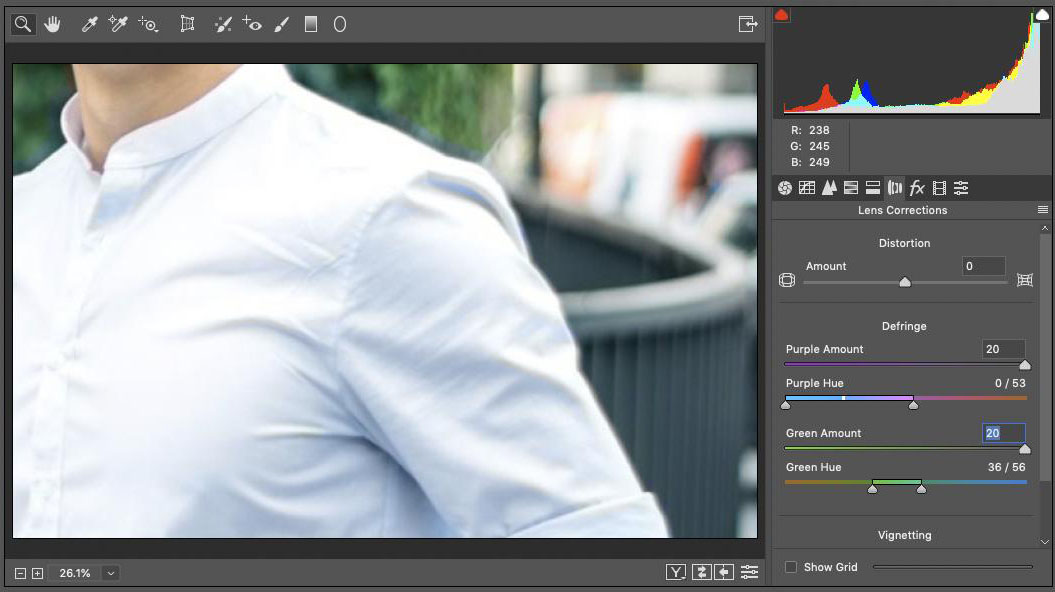 The camera lens projects an image of the outside world onto the surface of the camera’s image sensor. During the exposure, this image is recorded. Mostly these images are tiny however image size is intertwined with object distance and image distance. Image size (magnification) increases with longer focal length lenses because the image distance (back focus distance) is lengthened. Perhaps you have worked with a movie or slide projector, if so, you know that the further away the projector to screen, the larger the image.

Your question relates to how lenses work. In short, they alter the direction travel of incoming light rays bending them inward (refraction). The image forming rays then depart the lens with a modified direction of travel.

The images that every lenses makes is flawed by seven (or more) defects we call aberrations. The lens maker strives to eliminate each by crafting the lens using multiple lens shaped to mitigate aberrations. A modern lens can be very good but aberrations are only minimized, they always deface, to some degree, the projected image.

One of these aberrations is called “chromatic aberration”. This aberration is due to the fact that the paths, through the lens, each color of light takes, will be slightly different. The shorter wavelengths of violet and blue are refracted (bent inward) to a great extent than the longer wavelengths of yellow and red. The result is, the actual focal length of the various colors is slightly different. What happens is, the violet image forms closer to the lens followed by blue, then green, then yellow, then orange then red. In other words, the projection distance for each color is different thus each image will be different as to size (magnification). The final image is a series of superimposing images of the various colors, red being the biggest image, violet the smallest image.

What you are seeing is the residual effect of uncorrected chromatic aberrations. Your only remedy is to buy a better more corrected camera lens. However, we can improve this defect with high-end image editing software. Likely if you are using PhotoShop or one of its counterparts, look at the help section for advise as to how your software can cancel chromatic aberration.

Purple fringing is a common problem of lenses when encountering bright sources of light with considerable amounts of near-UV and UV light which gets focused differently than light of other colors. The typical problem area is branches before the sky.

Your image is an exception: it is likely a shirt washed with a detergent having large amounts of optical brighteners which reemits near-UV light when lit with other wavelengths (including UV light). That gives it its bluish-white appearance beyond the white balance of the light hitting it. You don't just see it in the fringes but also the shirt shadows, but there the focusing problems of the lens are not as apparent.

So the out-of-camera solution is a different detergent, probably one that is not specifically advertised and renowned for its "whiter than white" qualities.

In-camera, the first option of course is to get a better corrected lens (since this aberration is, after all, a deficiency). In film photography, you could usually address this problem to some degree using a UV filter, but the Bayer filter masks of the sensor are already cutting out UV light as such pretty well so the effect is not likely to be visible.

Any measure that will increase depth of focus will tend to help as well: stepping down the aperture is certainly the most important remedy (F1.8 is pretty wide open). However, with regard to zoom lenses, wide angles (which have large depth of field) are usually those where aberration correction works worst, so avoid the widest focal length settings.

Zoom lenses compromise their optical corrections across the range: so at comparable price/quality levels, prime lenses will often give visibly better results specifically in problem areas such as this.

Of course, one very important thing here is not to overexpose to the point of saturation. Once the sensor saturates on some primary color, the camera's built-in demosaicing and defringing and sharpening algorithms fail and its fallback results are less convincing. It's hard to tell from the JPEG how much this is the case here, but it certainly does not help.

Stop down to f/2.8. That, or try to avoid blowing highlights when shooting with your lens wide open. Probably both.

What you're running into is LoCA (longitudinal chromatic aberration), where light of different frequencies are slightly displaced from each other front-to-back. It most typically appears as purple/green fringe and is nicknamed "bokeh CA". This is distinct and separate from LaCA (lateral chromatic aberrations), where the light frequencies are displayed side-to-side and most often appears as blue/red "shadows".

Nearly all fast lenses when shot wide open at bright targets will exhibit purple fringing. It's just the nature of the beast. Stopping down is the easiest way to eliminate it. In post, you can eliminate the purple, but this really only works if there's no other occurrence of that shade of purple in the frame. :)

It’s a phenomenon called chromatic aberration in which the the areas in your photo in high contrast appears to have blue or pinkish color in the resulting. It is caused by dispersion: the refractive index of the lens elements varies with the wavelength of light. The refractive index of most transparent materials decreases with increasing wavelength.. You can remove it in post production editing of your photo. Or if You don’t this to occur you use professional grade lenses in NIKON the lenses which has nano crystal coating will eliminate chromatic aberration or ED Lenses (extra low dispersion glass) will help you.

Not the answer you're looking for? Browse other questions tagged portrait chromatic-aberration color-fringing or ask your own question.

7
How can I capture a really soft-looking baby portrait?
11
How to avoid tired eyes in a portrait?
4
How were these portrait photos edited to get this look?
3
How to minimize/avoid purple fringing before/during shooting?
2
How can I take a professional self-portrait?
2
How do I remove the green and purple fringing from the B&W blouse in this photo?
5
How to light a portrait so that lines are drawn accentuating the subject's cheekbones?
6
How can I get full-length 'shadowless' portrait photography?