What is the 'Diagonal Method' and should I use it instead of 'The Rule of Thirds?'

I recently was in a discussion with a photography mentor who asserted that over the years he has composed most of his award-winning and/or 'most popular' photographs using the 'Diagonal Method,' and that in his opinion because photographs composed in this manner were more aesthetically pleasing than shots composed using the 'Rule of Thirds,' they were thus more likely to win awards, be chosen by customers, etc.

What is the Diagonal Method, how can I apply it to my photography, and is it better than 'The Rule of Thirds?'

The "diagonal method" appears (as seen on a site dedicated to its advocacy) to have been invented — he says "discovered" — in 2006 by photographer and photography teacher Edwin Westhoff. The "method" is simple. It states that details which are important to the artist will be found — within a very close precision — along an imaginary diagonal line drawn at 45° from one one of the corners. 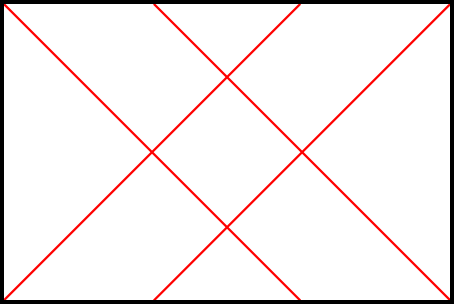 The rule states that these important details will be no more than 1.5mm from the diagonal on an A4 print. That's about 0.5%, which is the width of the red lines in the illustration I've made. So, in order to fit the diagonal method, a picture must have details precisely on one of those red lines; if it doesn't the diagonal method does not apply. The rule makes no claims about where on the lines the details should fall.

No particularly strong reason is given for the importance of these lines; Westhoff writes that this is a discovery based on observation. He suggests that it might be because of the way artist and viewer's eyes track over an image. There's no analysis given of these particular 45% lines over, for example, lines going corner-to-corner, or to divisions of the golden ratio, or otherwise.

Westhoff makes two arguments in favor of the diagonal method over the rule of thirds. First, he says that because this rule requires more precision than the approximation-is-okay statements that usually accompany the rule of thirds, it is more testable. Second, he argues that it is not a rule for overall composition, but an indicator of "details which are important to the artist in a psychological or emotional way." Notably, this importance could even be subconscious.

The first point seems somewhat disingenuous. An article on the above web site "testing" the method starts first by discarding all photos where the author judges the diagonals not to be meaningful; then, of the remaining ones, some fraction have some details determined to fit the method. This is textbook confirmation bias, so color me a bit skeptical on that.

And the second, well... it's decidedly subjective. Without artist's statements, it's hard to be certain whether the chosen details really are the ones of particular importance, or if Westhoff's analysis is simply circular. The idea that the "method" may operate at a subconscious level even beyond the artists' perception is even more untestable — perhaps thousands of people could be asked to identify the "important details" of a large random selection of images, and the aggregate results compared against the predicted position on the diagonal. But no such study has been done.

Westhoff goes to great pains to claim that this is a "method" of analysis, not a rule for composition, but it really does come down to the same thing.

All of these follow the same basic idea: someone examining works of great art comes up with a mathematical rule, to which special power in aesthetics is ascribed, whether for overall composition or for the most-powerful placement of important details. Samples throughout history are produced, with lines drawn to show amazing correspondence. There's a very strong appeal in having such a rule. Strong composition is very "right brained" and hard to pin down into logical, fixed rules, and it would be so nice if it turned out that there was a simple, mathematical rule that shook it out into left-brained logic after all. Then we wouldn't need to have that uncertain, undefinable thing that is artistic talent; we could just follow the algorithm and great works would invariably result.

There's no such secret, but that doesn't mean that such rules aren't useful. Having forms and limitations are great ways to aid the creation of art. Sonnets have a strong mathematical structure; it doesn't mean that they're mystically the best way to produce a poem, but if you can work within that form, you've got a focus for making good poetry. These rules can all be used in that same way.

Using the diagonal method in the field would be quite difficult without a focusing screen engraved with the proper lines, at least if you are to follow the 0.005%-precision aspect of the rule. One could certainly use it more informally by sighting mentally from the corners of the frame. In fact, Westhoff suggests that many artists do this intuitively already.

The rule explicitly doesn't concern itself with the overall composition, just the placement of details. Westhoff's writing is a bit inconsistent on the point of whether this is useful for aesthetics, or for indication of meaning and emotion without regard for beauty.

Westhoff suggests that it might also be useful in cropping an existing photo. One could use a template with 45° diagonals to ensure that important elements intersect the lines of the rule.

Additionally, if you subscribe to the theory, you could use a template overlaid on existing photographs for analysis; the rule states that the details intersected by these particular diagonal lines have special psychological importance or emotional meaning. So, you could look at your existing works and see if the theory holds true for you, or the works of a favorite artist to see if that artist subconsciously uses the method.

The rule of thirds, 'Golden Section' or 'Golden Ratio' and this diagonal method are rules of thumb. As mattdm says, having your subject off-center gives an image a more dynamic feel, and all of these methods place the subject in a similar location in my opinion. There is no "right" method. You can always find an images that seem to fit whatever rule you follow, but they often look contrived to me. Just because Mona Lisa's right eye happens to fall onto a crosshair doesn't seem that significant to me.

In the end, the Rule of Thirds, Golden Spiral, Golden Section and Diagonal Method are simple ways to potentially produce a pleasing composition, not because they're magical and revolutionary, but because are what has been found to be a factor in good composition.

It's the difference between saying:

Use (rule) because it's correct.

We found that pleasing composition tended to use one of many coincedental ratios, such as thirds, or the golden ratio.

I know that when I am composing a photo, I'm not really thinking about any ratios, rather what feels right or what I'm required to photograph (if I'm photographing for a client).

It just so happens that what I feel is "right" in composition tends toward the golden ratio.

Diagonal Method is harder to understand then the rule of third. I don't think Diagonal Method is for amateurs, because an amateur needs to fix his evident composition problems, and that's where rule of thirds, in my opinion, helps. If you follow the principle of "rule of thirds" when you are starting out and have no or very little creativity, you cannot go wrong with "rule of thirds" beacause is is like a babysitter watching you to make sure you're doing ok. Once you master the skills of photography through countless hours of practice, then you can start exploring DM theory in your work. DM requires that you know what your trying to convey.

There is another theory which is not mentioned but is practiced in Graphic Design, it is the theory of balance. Meaning you balance the art elements so that one side does not outweigh the other side, or else the composition begins to lean and cripple.

69
What is the 'Golden Ratio' and why is it better than the 'Rule of Thirds?'
45
What is the "Rule of Thirds"?
22
When is it OK to place the subject in the middle of a picture?
28
What is Bakker's Saddle?
7
If viewers don't respond to the rule of thirds, why do some photographers still emphasize it?
12
What are other popular composition techniques in addition to The Rule of Thirds?
7
Subject alongside, at the intersection or inside lines in composition rules?
9
What and how to crop?
-4
What is it called