Why one of the pictures in a bracket has a different f-stop value?

But I don't know why the first photo (leftmost photo below) has a f/2.8, 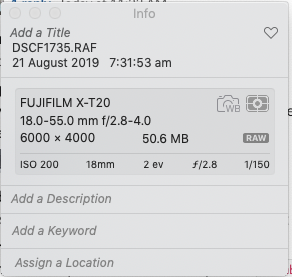 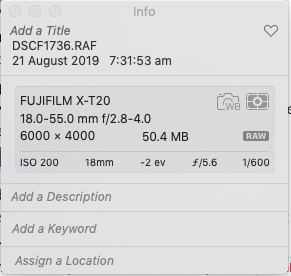 Is it a good thing? Or is it not going to impact the final HDR output?

If it may impact the final HDR outcome, how I can avoid it?

You must have been on fully automatic exposure mode (both speed and aperture set to automatic). With f/5.6, the -2 EV image would have had to be exposed for 1/35 sec. and the camera's logic decided that that was too long (as it would have a high chance to be shaky).

So it decided to open up the aperture instead.

As you feared, this is generally not desireable for HDR merges, as the image will have a narrower DoF as the others. But in this case it doesn't look that relevant as you do not have any foreground details.

Next time, set your desired aperture value manually, letting the camera only change the time (and possibly the ISO).

Not the answer you're looking for? Browse other questions tagged bracketing fujifilm-x-t20 or ask your own question.

3
Can the Nikon D700 do automatic bracketing by aperture?
1
How can I stop the Nikon D90 from bracketing?
2
Is it possible to take automated multiple exposure stop pictures with a Canon Rebel
3
Is there a way to make the Nikon D5100 fire three auto-bracked shots with one press?
3
Can the Canon 600D take images one stop up & down for creating an HDR image?
3
Is there a technical reason why the flash is disabled with film simulation bracketing on the X100t
0
What is the optimal Resolution setting to send raw photo from Capture One to Aurora
0
Why there is a border box on certain photos in Capture One workspace?