How to determine which jpeg is closer to the original image and has the most information?

I've got two jpegs of the same photo of different sizes and attributes. How can I tell if one is the original taken by an iPhone4 or if neither is the original, determine which has the most information?

Adobe Bridge for the first photo shows this metadata: 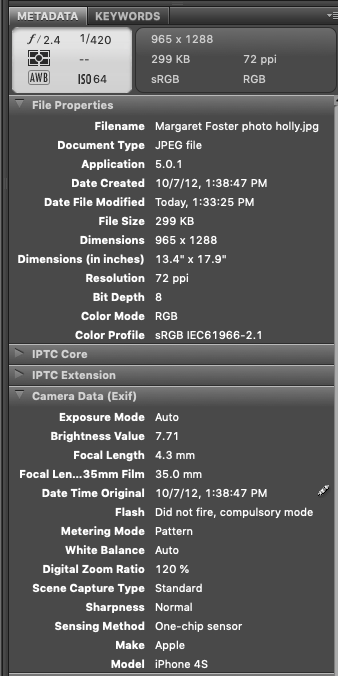 And the second photo shows this metadata: 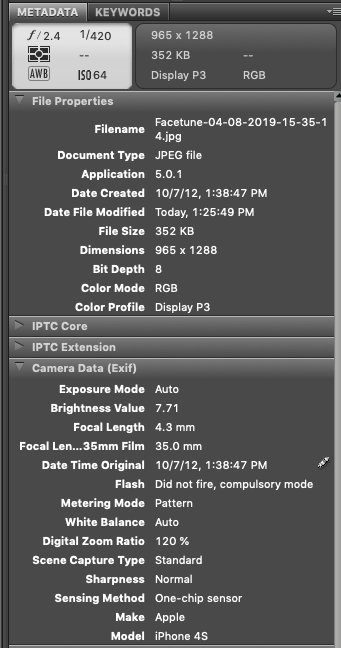 I think neither is the original since Wikipedia article on iPhone4S says the rear camera was 8 megapixels.

Here is another version of the file that is higher resolution, but doesn't match the 8 MP camera of the iPhone4S: 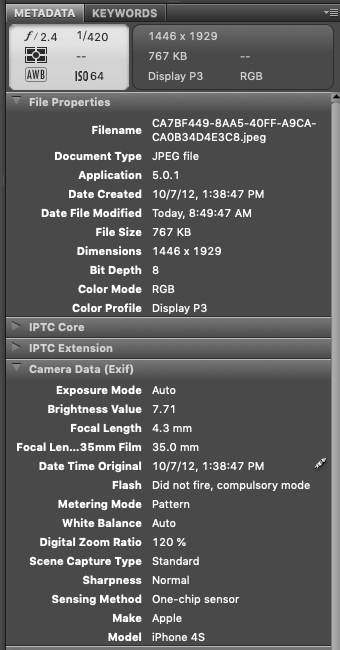 You can't really tell from these data. Of course, one could hope that the bigger file holds a bit more information, but it could just be the other one badly re-encoded. Utilities such as ImageMagick's identify can tell you the JPEG "quality" setting (and the chroma sub-sampling) but you can still be looking at a re-encoding that caused some data loss.

If you have both images, you can:

The bigger file will now correspond to the initial picture with the more "information" (but, strictly speaking, this could be added noise).

It's unlikely that any of the images you have is the original if you do not have access to the device that they came from. Apple devices typically resize images when sharing. If you need the original, contact the owner of the device that created them.

Deciding which image is "closer" to original is a judgement call that requires you to examine the image contents, but the third file is probably "closer" because:

Between the first two images, the second is likely "closer" to the original because:

The filename of the third image looks typical of a hash (string of numbers and letters A-F). This is typical of images that have passed through an online service, like Facebook.

Not the answer you're looking for? Browse other questions tagged image-quality jpeg iphone image-compression or ask your own question.

25
Does simply opening and closing a JPEG file decrease image quality?
7
Which has a faster write time: RAW or JPEG?
4
Why are JPEG images from camera huge and the same images exported from Vistaprint software 10 times smaller?
0
I want to use picture's Metadata so I can search photos (ios)
2
Is editing metadata of a JPEG destructive to the image?
2
Why do JPEG and TIFF versions of image look different?
3
GIMP: Why can I set a higher quality than original image in the "Export Image as JPEG" dialog?