Ask Question
Asked 12 months ago
Active 12 months ago
Viewed 92 times
1
This question already has answers here:
Is it normal for a fast prime to exhibit purple fringing in middle of the image? (3 answers)
Closed 12 months ago.

I noticed a purple-ish outline around my photo, however, I couldn't remove it through the Lightroom Defringe option. I have tried the fringe selector and playing around with the slider, nothing seems to work. 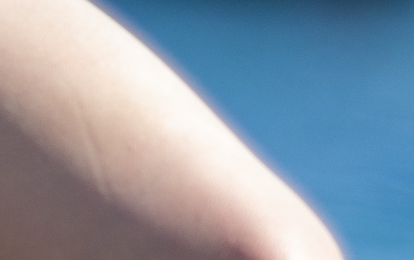 Longitudinal chromatic aberration means that the focus plane for different wavelengths is different. The effect occurs over the entire image and cannot be compensated systematically. Some image processing programs still offer tools to detect and correct such fringes. The typical scenario for purple fringes is sharp edges (such as branches) before the sky. Since the sky contains a high amount of short wavelength visible (and partly UV visible only to the camera) light, the edges may be out of focus for short wavelengths more than for other wavelengths and have purple from the sky bleed over.

Now this may contribute to the basic purple hue you have in your edge, but in your example image there is a lot more going on. It appears like the arm is considerably out of focus and you applied generous amounts of sharpening and likely adaptive noise cancellation. This leads to considerable halos around the edge that also tend to spread out what may have started as a purple fringe from longitudinal chromatic aberration.

Starting from a photograph that is better in-focus will likely make it easier to figure out what is happening, and it might also make some of the image processing corrections be more successful at detecting and masking the fringing.

Not the answer you're looking for? Browse other questions tagged chromatic-aberration lightroom-6 or ask your own question.

12
Is it normal for a fast prime to exhibit purple fringing in middle of the image?