What do 'glowing' and 'flat' describe in black and white photographs?

In the development of B&W film rolls, people often talk about their result being flat or glowing. What do these terms mean?

I now have Tri-X 400 roll (not yet developed). How can I achieve glowing photograph in the end?

In the development of B&W film rolls, people often talk about their result being flat or glowing.

I would urge you to take this with a grain of salt, as no one staring at a print is thinking of the negative. The negative is a vitally important step - but that's just it - it's a step. Many modifications can be made during printing. Because of this, one should strive for the best possible negative to be used as a foundation from which to create the best print.

If we assume that the person is talking about the tonal range, then "flat" is meant to mean "containing a limited range of tones" - generally this is in the mid range, giving a muddy appearance, but too dark images with no highlights of too bright images with no shadows will also appear flat.

The opposite of this would then be "glowing" or images that "contain a full range of tonal values from black to white" - usually without being overly contrasty.

How can I achieve glowing photograph in the end?

I'm glad you mention in the end - your heart is in the right place.

First up, you need a negative that you can work with. Whether something is inherently high or low contrast begins at the quality of light. Big, diffuse light like a cloudy day is inherently less contrasty than hard point lights like the sunny noon sun.

But, no matter what, you need to expose the film such that a "proper" exposure is made. As the negative is simply a step, you're looking to give yourself the best base from which to build. There's an old adage, "expose for the shadows, develop for the highlights."

The reason you do this is to make sure that you capture shadow detail. Film has an inertia - a minimum amount of photons must hit it to cause a reaction. This is really exemplified in the case of long exposures and reciprocity failure but the concept shows up again as a microcosm of itself in capturing shadow detail.

Now, film has latitude and can tolerate some level of both over and under exposure. B&W happens to tolerate over-exposure very, very well.

This is why you expose for the shadows (make sure you capture their detail) and let the highlights overexpose if needed. If the scene is very contrasty and you are especially worried about the highlights, then you can develop for them. This means use a compensating developer and/or process, like Stand Development.

Alright - cool. Now you should have a negative where:

This gives you a fantastic base from which to start. When it comes time to print, there are many schools of thought. Personally, I test strip with no filters until getting a proper exposure. From there, I'll choose to lower or heighten the contrast over the whole image, and then apply varying contrast filters as either burned or dodged into the whole. The same can be done digitally.

As an example of this, please see the image below (sorry, I only have a picture of a picture for this one). I was satisfied with the image as a whole but it felt "muddy" or "flat" to me. So the bottom corner feathers were burned in with a higher contrast filter. The image in person does look better, as the highlights look brighter. This was me adding higher contrast and burning the corner in order to add in darker shadows, more contrast, and get away from it being flat.

When it comes time to print, it's always good to start off with a good negative. From there, lower or up the contrast globally, locally, or both to finish up with the tonal range that you want for the photograph. 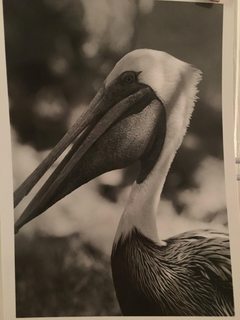 xiota was kind enough to edit my photo of a photo. This likeness is more akin to the print (click to expand): 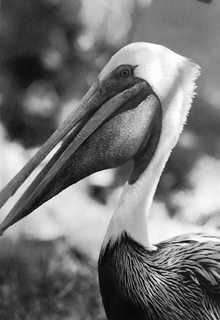 'Glow' can mean many things. One common usage is 'Leica glow', and this means two things, only one of which is real.

The real thing. Many older Leica lenses, while of very high quality, were not fully corrected for spherical aberrations. This gave a combination of very good rendition of detail with a surrounding 'halo' or 'glow' often quite visible in photographs with fairly large dynamic range over short distances. This is often, but not always, very attractive. Other high-quality lenses also suffered from similar aberrations.

The unreal thing. More recent Leica lenses are much better corrected and tend not to suffer from these aberrations. But people who have bought them often want them to have this magic property and will insist that they have 'Leica glow' even though this is not in fact present.

I am not saying this to detract from modern Leica lens designs: they are extremely fine lenses and the 'Leica glow' is an aberration. However if you want to see it, you need older lenses (or lenses which are intentionally designed to be imperfect in this way: some Leica lenses may be, some Zeiss lenses certainly are).

These are words used in the jargon of photography. Black & White images can display a myriad of tones packed between a pure white and a pure black. Such an image zip, in other words, glowing. Conversely, an image can be flat. This image has reduced shades of gray, perhaps a muddy black with no true white. In other worlds it is flat. Flat can be an image with white and gray and no black. Or, black with grays but no white. In other words, this image lacks the full scale of possible tones.

Flat and glow are examples of descriptive words that may have different meanings to different people.

Not the answer you're looking for? Browse other questions tagged film terminology development or ask your own question.

18
What is the Orton Effect and how can I apply it to digital photographs?
10
Why do my photos "glow"?
2
Printing negative into paper versus Lightroom processing
1
How do you meter shadow with Nikon FM2 built-in light meter

5
What does the temperature specification on a roll of film refer to?
3
Shooting black and white on a color film
2
Negatives came out very thin
3
Are overheated rolls of film (both exposed and unexposed) likely to be damaged?
4
Weird artifacts when using Tmax 100 for black-and-white reversal processing
4
Hold baggage xray scanners - how likely is it my film might have survived?
7
How do different developing fluids affect black and white film?
6
Tri-X compared with HP5 plus, grain
4
Developing Problems, maybe with JOBO developing tank?
2
Will hardener help prevent emulsion wash-off during development, 35mm B&W (ADOX CHS 25)