How do I get the stars in focus with my astrophotography setup? [duplicate]

Getting precise focus is a bit tricky. Some lenses mark the "infinity" point, but some lenses don't have a focus distance scale on the lens (depending on which Canon EF 50mm f/1.8 lens you are using, you may not have the scale).

But even if you do have the scale on the lens, the "infinity" mark is really just an approximation. It will not be precise.

This is not the exposure you'll use when imaging the sky... but what it will do is make the stars in live-view much brighter so they will be easier to focus.

The reason for this maximum exposure duration is to avoid stars elongating due to the rotation of the Earth. This rule is sometimes referred to as the 500 rule. It says you can divide 500 by the focal length of the lens. Except it assumes a full-frame camera (it was originally for 35mm film cameras). The rule tries to determine how much a star will appear to move over time based on the true angular field of view. Having a smaller sensor means the true angular field of view is smaller and this is why you have to compensate by factoring in the crop factor of the camera.

You can make life a little easier by getting a focusing mask. The most popular variety is called a Bahtinov Mask. See: https://en.wikipedia.org/wiki/Bahtinov_mask The mask causes any point of light to create a set of diffraction spike. You get a pattern that appears to be an X shape with a vertical bar through the center if you are close to accurate focus. But the vertical spike wont be in the center of the X if you are not at perfect focus ... it will be off to one side or the other (depending on if you are inside or outside focus). You carefully adjust focus until all spikes converge at a common center point and that means you've nailed focus.

For longer exposure durations, consider a lens with a shorter focal length. For example a 20mm lens would allow for a 15 second exposure. An 8mm fish-eye would allow for nearly 40 seconds.

If you have a tracking head (properly aligned) then you don't have to worry much about stars elongating in long exposures. The head is aligned so it's axis of rotation is parallel to Earth's axis of rotation (in other words it's axis is pointed toward the celestial pole). By doing this, as Earth spins from West to East, the motorized tracking head spins from East to West at precisely the same rate -- cancelling out the motion of the Earth. This means stars remain stationary in your lens' field of view and you can take very long exposures (I've done 8 minutes ... but could have gone much much longer). 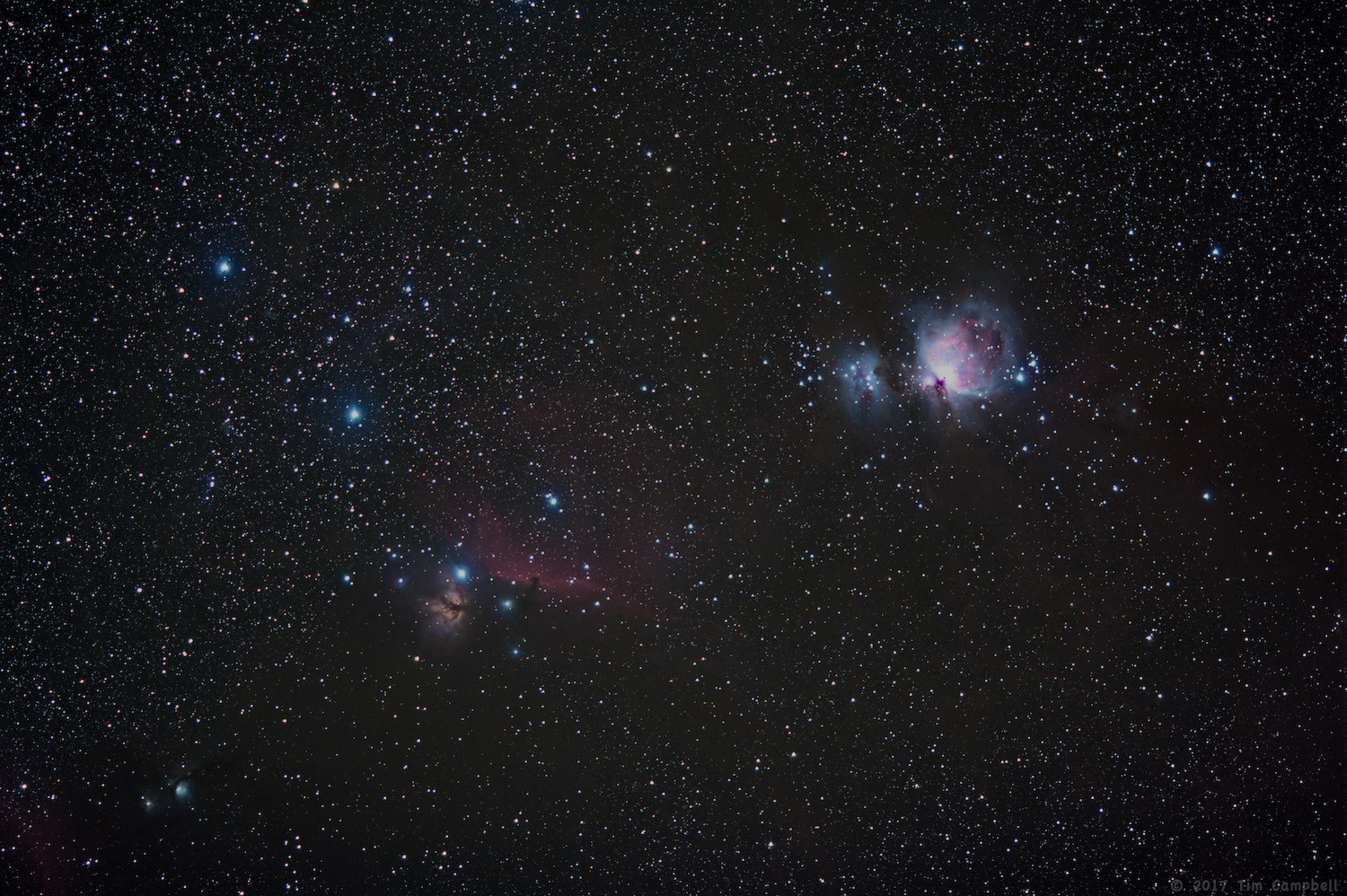 The above example is an image I captured using a Canon 60Da with an EF 135mm f/2L USM lens ... but attached to a tracking head. This allowed me to use much longer exposure durations.

Another advantage of longer exposures is it allows you to stop down the lens. While everything is focused at "infinity" you'll find lens optical issues are much less of a problem at higher focal ratios vs. shooting wide-open. The above image was shot wide-open and if you inspect the brightest stars (the three bright belt-stars in Orion on the left side (this is the lower half of Orion with the "belt" rotated on it's side) have tiny bat-wing shaped spikes. This is sagittal astigmatism visible because I shot at f/2. Had I stoped down even a small amount (say f/4) those issues would be much less noticeable.

You can build a tracking device (e.g. a "barn door" tracker) but today there are a few commercial products that are extremely popular. Namely Sky Watcher makes a device called the "Star Adventurer" head and iOptron makes a device called the "Sky Guider Pro" head. (I don't own either of these heads. I have a model made by another vendor which is no longer in production. But I mention the current models because they are popular. I have no affiliation or bias toward or against either product.)

We focus our camera to image stars and all other astronomical objects by setting the lens focus to infinity (as far as the eye can see symbol ∞). This will be the same setting as distant mountains or clouds etc. When taking pictures of astronomical objects, because most are quite dim, we use a rather long shutter speed. Keep in mind, image sharpness will be compromised unless the camera is solidly mounted. Best use a tripod or other support.

One more thing, these objects have apparent motion. As the earth turns beneath the stars, they appear to move 360⁰ in a day. That works out to 15⁰ an hour. In 1 minute they appear to move ¼ ⁰. Even this tiny movement in one minute is enough to blur the stars. Astronomers typically strap their cameras to an electrically driven telescope. These motorized telescopes counter the rotation of the earth -- thus subject motion is neutralized. Take heart, you can make wonderful star pictures. Use a time exposure (keep the shutter open for hours to capture star trails). Your 10-20 second exposure will do nicely for what you want; just find a way to steady the camera.

11
What is the best way to focus when doing night photography or astrophotography?
3
How can I avoid star trails?

24
Longer exposure & lower ISO or shorter exposure & higher ISO - what gives better results when photographing stars?
2
Is there a problem with my collimation? Telescope shows coma
1
Why is my nighttime sky image so poor (few stars and a yellow glow)?
11
How can I achieve more clarity in my photos of the moon?
3
Will my finepix s8600 be enough for the milky way
0
How to set exposure for photographing the milky way?
6
Long exposures create red noisy glow.. but only with one of my lenses. Why?
0
What is the max. exposure time when using an iOptron Pro mount with a EOS 70D & telephoto lens?
19
What causes the fake colors of stars on these pictures?