How to fix plastic mount on dropped Nikon 70-300mm lens?

I accidentally dropped my Nikon 70-300mm lens and two small plastics broke off. Can it be fixed? 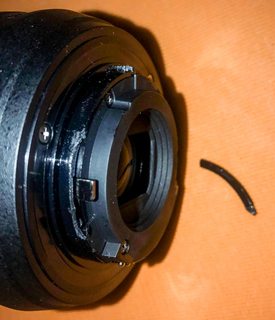 Lenses with plastic mounts are usually not worth fixing. If the lens covers a focal-length range you use frequently, consider seeking a replacement with a metal mount.

You could, potentially, repair it by gluing the pieces back in place. You'd need to use a glue that does NOT out-gas anything as part of the cure process; this to avoid contaminating the lens elements or anything inside the body. That still leaves you with the possibility, as noted by xiota, of the repair not holding and broken pieces in the body - you don't want that.

Replace it would be my recommendation. Toss it or sell it on Craigslist as a parts lens. It's a kit lens that can be bought at Adorama as a refurb for $110; $150 with VR. Both have plastic mounts, though.

Better still, buy into a better quality mount. Sigma & Tamron are good lenses and are notably less expensive than their Nikon counterparts.

Not the answer you're looking for? Browse other questions tagged lens repair lens-mount equipment-damage or ask your own question.

1
How to fix lens “stuck” on Nikon D3100?
0
“Lens not attached” appearing whenever I try to use my Nikkor 70-300mm?
2
Nikon D5100 not getting battery power after being dropped?
2
Nikon 18-55 mm Lens Focus Wheel Jammed
6
How to fix a bent lens mount hook/tab?
1
Nikon 18-55: fix shifted focus range
3
Repair shop says my dropped Sigma Art lens is a write-off — but can I fix it myself?
0
How can I remove a stuck lens from camera body (after I dropped them)?