How do you pose a turtle?

We're doing a photoshoot and there's a turtle that should be in the shot.

What is most flattering for a self-conscious half-shell?

Assuming you're not just trying to expropriate the Michael, and that the testudine in question is to be the star of the show...

Try a front three-quarter view (with the camera essentially aiming towards the center of the shell from an angle between the head and one of the forelimbs) from slightly above the seam line. I would put the rearmost front limb near the edge of the frame -- even given that it's a turtle, the idea that an animal is being captured just before it runs away still works. And getting in tight enough to exaggerate the apparent size of the turtle would probably help.

Ideally, the head would be turned back towards the camera. (Sorry, I don't know how to get a turtle's attention, but maybe something tasty?) That makes the subject look like it's a full participant in the exercise. The key light should probably come in from the body's apparent direction of travel (or just a bit more to the side). The light should probably be from a relatively low angle as well -- nobody looks their best with harsh overhead lighting. And, depending on the species and the environment your set is creating, a cookie to create a dappled lighting pattern on the shell and the surroundings (while leaving clear light on the head and "shoulders") might add a lot to the atmosphere.

If you want it to look alive, it would probably look best in mid-stride (you'll probably have to use a fast shutter speed, like 1/8s or even higher) and moving slightly uphill (I assume you have the liberty to build that into the "set"). Get it all right, and you can make people believe that you have a singularly energetic and enthusiastic model. And do take note of the head and camera angles and the jaws -- you can actually make most turtle species appear to smile with the right lighting.

I think ideally, you'd like to see legs and neck extended. This is pretty easy to recognize when you see it - this one spent a couple hours poking around the shore - maybe looking for a place to nest. This shot is head-on, which doesn't show as much of the turtle's body as the 3/4 shot Stan mentioned, but it's got pretty good extension of the head and legs: 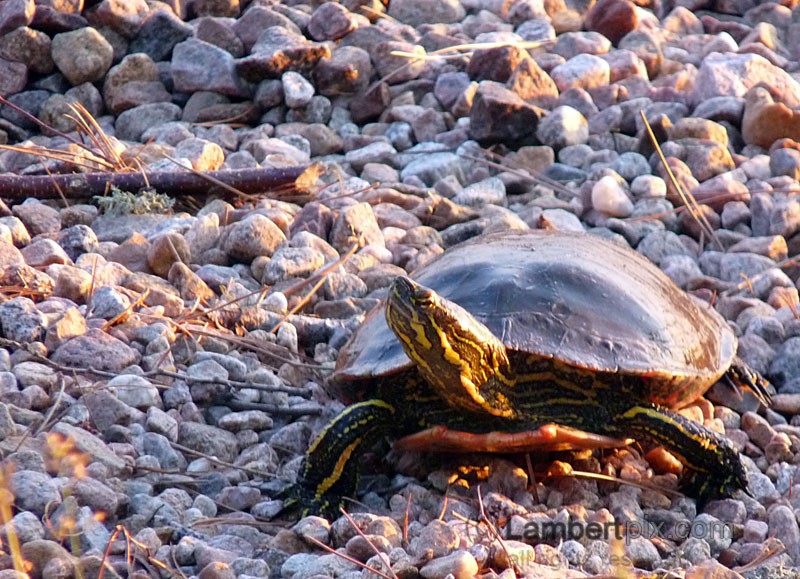 Trying to get the turtle to do this on demand, though, could very well end up looking like an episode of Gilligan's Island. If it's a pet turtle, hopefully you could get to reach for whatever its favorite food is, but if it's not tame, you may be forced to operate on the turtle's schedule.

Lighting is going to depend somewhat on the kind of turtle you're shooting, I think. As you can see in my photo, some of them have fairly shiny shells, so you could end up with some glare (in this shot, the sun was very low on the horizon behind the turtle, and she'd just crawled out of the water, so her shell was wet, too). Land turtles (tortoises) are generally going to have a dry, rough shell, though, which won't be as prone to showing glare.

I guess it would also be helpful to know if you're trying to have the turtle look natural, or if you're going for something more staged.

Not the answer you're looking for? Browse other questions tagged lighting posing animals or ask your own question.

169
What are the best techniques for photographing overweight people?
17
How to photograph people with a prominent (wide, big) nose?
5
How do I get regular people to relax and not to overprepare having their portrait taken?
3
How can I light a staged showroom interior, where there is no ceiling to bounce light from?
0
Is a 50mm or 18-108mm lens most appropriate for a clothing photoshoot?
2
Create apparel highlights with photoshop
23
How to reposition subject in the same place and pose in a series of images over time
4
How to photograph in space with lots of diffuse light?