How to find the dynamic range of a scene (not camera sensor) from a photograph?

I have an older Sekonic light meter and I've used it before to understand DR of a scene before I've captured an image using the Zone system.

What I'm wondering is if you can take an already captured/printed photograph and analyze the photo itself to determine the dynamic range of the scene that was captured? Does this make sense? thanks!

[See below for some notes on reading the dynamic range of photographs, rather than of scenes from photographs, which is a slightly different thing.]

No, you can't, in general. I'll give an answer based on prints made from film, but the same thing applies elsewhere.

Let's say I give you a print. You use a densitometer to measure the density of various areas of the print and you get some figure for the dynamic range.

Even if you are clever and avoid this problem, you still have the problem that I made the print with variable-contrast paper, so you have no idea what the dynamic range of the negative is: perhaps I printed a very hard neg at grade 1, or a very soft neg at grade 4.5?

Oh, also, I have also intentionally adjusted the amount of light which hit the paper in various areas of the print to darken and lighten areas of it. And I may have done that with different effective contrasts (so, for instance, I often add some vignetting to prints to darken the edges of the frame at a much lower contrast than the interesting part of the picture).

A print, especially a good print, is a completely unreliable witness to the dynamic range in the original scene. And that's true even if the negative is a good witness, which it isn't.

As I said, this answer is based on film and paper. The same is true for digital image-making, except much more so.

A note on measuring the dynamic range of images, which (following comments) I think may have been the intent of the original question. You can do this, but you need to be careful.

For physical media (prints, film) you do this with a thing called a densitometer. For digital photographs you can do this just by looking at pixel values and translating them appropriately.

However you need to be quite careful about what this means. For instance, a print made using the 'true whites, true blacks' maxim will almost certainly end up with a dynamic range which is just that of the paper, if you read it in a simple-minded way. Similarly many digital images will have both highlights which are essentially white (the pixels are all at or very close to their maximum brightness) and shadows which are essentially black (pixels at or very close to their minimum brightness). 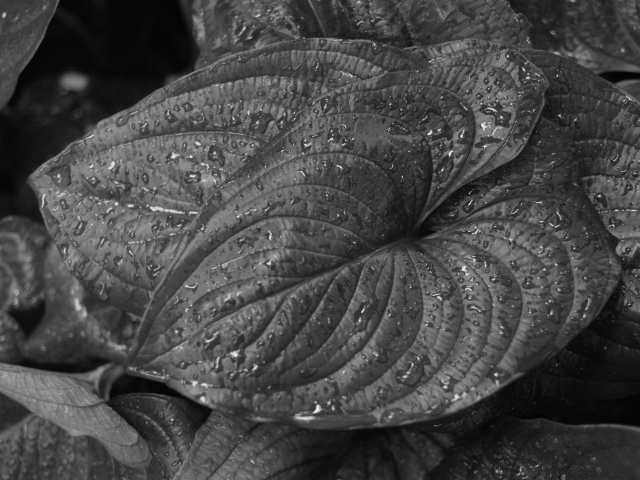 This is not a particularly high-contrast image. Yet it has pixels which are flat out white, and pixels which are flat-out black (note I've scaled this heavily, so if you look at it you may get different answers). That's because there are specular highlights in the water drops which are white, and there probably are genuine areas of black. Well, I care about the black areas, as detail has really been lost there (intentionally, to lose background detail I didn't care about), but the specular highlights really don't matter.

But a simple-minded reading of the dynamic range of this image would show it as having the largest dynamic range it can have, and that's just not a good representation of what is, in fact, a fairly low-contrast image: all the bits that actually visually matter in the image are in a fairly small range of values.

So if you want to get something that means something what you need to do is to make a slightly intelligent judgement about which parts of the image you care about, and which areas (specular highlights, say) you don't. This is the same thing you do when metering a real scene, of course: when I take readings from a scene with a spotmeter (for LF photographs) I'm always taking readings from the bits of the scene I care about: I'll read someone's face to get what I want to be in the middle of the range, and may be some bit of black clothing to get the bottom of it &c: I won't (for instance) take a reading from the Sun to get the top of the range, as I'm happy for the Sun to be way outside what the film can capture.

Well, you need to do the same thing for photographs: when you read them, even with a densitometer, you need to make intelligent judgements about what you're looking at in the same way: there's no point in just saying 'oh, there's paper black here, and paper white here'.

In fact I've been discovering something like this recently: I have access to a very fancy B/W enlarger which has a densitometer in it. What you do is set it all up with a neg, then take readings from the projected image, and it will then set both the exposure time & the grade (contrast) to print at (you need to calibrate it for the paper you're using). This is cool ... except quite often you're looking at a neg you know from experience needs to be printed at, say, grade 3 (so medium contrast neg)) and it will be absolutely determined that it wants to be printed at grade 5 (very soft neg). And you end up pissing around with the densitometer for five minutes, reading only the bits of the neg you care about, until it gives you the answer you know it should be giving you in the first place.

So dynamic range, for photography is a slightly complicated question, which requires thought to understand, because the dynamic range you care about is often not the raw dynamic range of the image.

(Note again: I've concentrated on film & paper here, because that's what I do. Many of the same considerations apply to digital images, although they are technically easier to read.)

No, this does not make sense in many cases. I'll provide an answer based on digital, not based on print, as opposed to the other answer.

Consider this: you have a scene where the maximum brightness is 1 000 000 times the minimum brightness. No digital camera with commonly used technology can express that much dynamic range.

Now, you cannot divide by zero, so 16383/0 is undefined. No way to determine the dynamic range of the scene.

You can determine the dynamic range of the scene only if it's within the limits of the camera. Otherwise, the camera loses information.

In short: No. Not unless you're in a controlled laboratory-like setting and you have robot-like repeatability. (If nothing else, the photographic process can be quite consistent.)

A photographic print is a representation of the luminance range of the scene using a density range. I'll avoid "dynamic" for the present.

It is the result of processes which are variable and non-linear. One of them is referred to as gamma, a "contrast" ratio of an original vis-a-vis the record.

You wish to work from the print density range to film density range through two changes of gamma (a kind of compression) to make an intelligent statement of the luminance range of the original scene at the moment the scene is recorded.

In order to do this you would need to know what the degrees of compression occurred at each step of the process.

What you want to do would make sense but for this fact: A film record (photonic energy) cannot be determined without processing (chemical energy) which introduces a variable.

The Zone™ System takes advantage of this compression. One records the luminance range of the original scene (1:100,000) and places the exposure at a point (zone III) where manipulating the processing produces a negative with a desirable density range (0.03-2.5). This, in turn, is used to produce a print (0.03-1.8) by the same reasoning and method.

Did that make sense?

Not the answer you're looking for? Browse other questions tagged dynamic-range light-meter zone-system ansel-adams or ask your own question.