Can hyperfocal distance be used to keep everyone in focus in group photography?

If you have different sets of people standing at different linear distances from the camera can we use the theory of hyperfocal distance to ensure sharp focus on all subjects? Conversely does being "acceptably sharp" mean that some people in front of and behind where we focus are not as sharp portraits should be?

tl;dr - in theory, sure. In practice, I've found that it isn't really needed.

In theory, yes, one could use the hyperfocal distance (HFD from here on out) to ensure that all subjects are reasonably sharp. That being said, an important consideration for "sharpness" and HFD is the print size and viewing distance of that print. If you figured out some great range assuming a 24"x30", and then the client asks you for a 40"x60" to put above their fireplace where people will walk right up to it...well, that might not work out so well.

The use case for HFD is to get things on out to infinity into focus. Landscape shooters love it because it allows for some foreground subject to be sharp while maintaining sharpness to those distant mountains/vistas/clouds/whatever.

However, with portraits, we're typically trying to isolate the subject(s) and having some background blur isn't a bad thing. Even in environmental portraits - it's typically the immediate environment that you're showing off, not what's hundreds of yards (or more) away.

Consider this image (click to expand) (Shot by Redfield Photography): 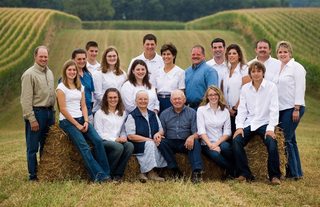 There's obviously enough Depth of Field due to the aperture, focal length, and distance to subjects to get them all in focus - but not enough to get the background. So, this is not using the HFD. And, this would be a worse off picture had the shooter decided to use the HFD, because the background trees would serve no purpose being in focus.

Even with groups of people, like a high school marching band...something like that would necessitate using a wider angle lens from a distance, where DoF comes easy; the need for HFD is simply not there.

In theory, only the distance focused upon yield a tack sharp image, all other distances reproduce with reduced sharpness. In practice, this is an invalid statement as their exists a span both ahead and behind the point focus that yields images acceptably sharp. This zone (span) in photo gobbledygook is depth-of-field. Let me add, the hyperfocal distance calculations are a subset of the depth-of-field calculations.

The bases is, a camera lens works by projection an image of the outside world and that image consists of googolplex of tiny individual points of light we call circles of confusion. So named because each has a scalloped edge and each is juxtaposed to a neighboring circle of confusion. It is the size of these circles that determines how we perceive image sharpness.

Deviating – If a friend holds up a coin you discern that coin to be disk shaped (has measurable diameter). If your fiend backs away, as the disk of the coin shrinks. At some distance you fail to perceive a disk, it becomes a point. A point is tiny and has no measurable dimension. For the average person point of change, disk to point, occurs at 3000 diameters. In other words, a coin 1 inch in diameter appears as a point at 3000 inches = 250 feet. In metric terms, a 1 centimeter coin viewed from 30 meters.

Now the 3000 diameter distance is far too stringent for photographic applications. This is because the typical photograph has less contrast than realism and we view photographs in subdued light. Photo scientist generally agrees on 1000 diameter distance. Kodak, for critical work used 1750 and Leica 1500. Most depth-of-field tables and calculators use 1000. It’s subjective anyway because no one can predict the acuity of vision of the observer nor the ambient light brightness of viewing and the contrast of the circle to its background.

That being said, consider an 8x10 image viewed from our typical reading distance. What we perceive as sharp vs. blurred will be circles of confusion smaller 3.4 minutes of arc. That’s 1/50 of an inch viewed from 20 inches or 0.5mm viewed from 500mm.

In practice we view an 8x10 image made by a 35mm camera. To make the 8x10 we must enlarge the tiny camera image 8 times (magnification or enlargement = 8X). Thus the circle of confusion diameter as projected by the lens, inside the camera, must be 0.5mm ÷ 8 = 0.06mm. In other words, the images that comprise the people located on any row must be 0.06mm in diameter or smaller inside the camera.

Lots of gobbledygook to tell you that depth-of-field and hyperfocal calculations are laden with subjective facts not necessarily valid for all occasions. The bottom line, the point focused upon is likely tack sharp. As to distances fore and aft, the images may have reduced sharpness but our acuity of our vision is not precise, this allows such a thing as depth-of-field.

If you have different sets of people standing at different linear distances from the camera can we use the theory of hyperfocal distance to ensure sharp focus on all subjects?

Conversely does being "acceptably sharp" mean that some people in front of and behind where we focus are not as sharp portraits should be?

Understand that hyperfocal distance is the theoretical maximum depth of field given a certain focal length, aperture setting, and "circle of confusion". Also understand that depending on your mathematical interpretation, comparative "maximum depths of field" is nonsensical. After all, focusing the lens at (or beyond) the hyperfocal distance yields a so-called "infinite" depth of field. How can one "infinity" be larger or smaller than another "infinity"? In the case of depth of field, we're not talking about Cantor sets or countable vs. uncountable infinities.

Hyperfocal distance more applies when you want both a far distant background and a near foreground to be minimally blurred. That is, you want the entire scene to be considered as a whole.

When taking a portrait, you don't care about maximum depth of field. You want maximum sharpness through the depth of interesting subjects — the people in the portrait. Without changing your aperture, you will ensure your subjects are sharper if you focus on the eyes of the person/people that are about midway the distance between the closest and furthest away in the group shot*, than if you set the camera at hyperfocal distance.

If you take a group portrait with hyperfocal focusing, you're essentially saying that the people in the shot are only as important as the details in the far background and near foreground. But that's basically never the case: if you know or care at all about the people in the shot, they are the subject, not the foreground or background. As a photographer, it is your job to direct the viewer's attention at what you intend to show. If you are shooting people, they are the subject. Period. Focus on them. Sure, you can stop down the aperture to increase the depth of field in order to bring the foreground and/or background into relatively more focus. But don't sacrifice the focus and sharpness of the subject in order to bring nonessential things into focus. The viewer's attention is a limited resource — don't squander it by spreading the focus of the image across the entire scene. Use your tools — the sharpness of your lens — to force attention on the subject (the people), and use your art of composition, timing, lighting, etc., to add spice to the scene. But spice and garnish should never overpower the main dish — they should work to accentuate and draw attention to the main dish, which is the subject of focus.

Acceptable sharpness/depth of field (DOF)/apparent sharpness are all perceptual qualities dependent on how an image is viewed (size/distance). But actual sharpness/maximum sharpness only exists at the singular plane of focus. That may mean that those in front of/behind the plane of focus are "not as sharp as portraits should be," or it may not... what is the standard/requirement?

Hyperfocus is about maximizing the DOF by focusing at a specific distance based upon the effective focal length and aperture, and then everything w/in the scene just falls within the DOF to be acceptably sharp; rather than anything being actually in focus necessarily.

Added into all of this is the fact that, in practice, it's nearly impossible to determine the precise distance at which you are focusing... especially with short throw modern lenses. In general, unless you absolutely need both very near and very far points acceptably sharp, then it is best to place the point of focus at the correct distance (on subject).

Focusing at the hyperfocal distance includes the concept of infinity, with the depth of field extending from infinity back to half of the hyperfocal distance. The sharpest point is always at the focus distance. Infinity seems quite inappropriate for a group photo (Unless perhaps you are outside at a scenic view and do need to include infinity, but you might want to consider a closer background for a group portrait).

Depth of field at a specific focus distance has a near limit and a far limit of depth of field. Go by that for a group portrait.

Not the answer you're looking for? Browse other questions tagged focus portrait depth-of-field hyperfocal-distance or ask your own question.

15
Why focus on the eye closest to the camera instead of the eye in the middle?
2
outdoor group photo - depth of field, other concerns?

9
How can I get maximum DoF with no distance markers?
11
Is it possible to measure distance to an object by adjusting the focus?
0
does depth of field travel with the focal plane?
2
Programmable cameras that can take multiple shots at different focus settings
4
Where should I focus in landscape photography?
15
Why focus on the eye closest to the camera instead of the eye in the middle?
0
Understanding focus distance of Nikon f/1.8D lens with D5600 Camera
3
The ideal pinhole camera has an infinite depth of field
2
Is the hyperfocal distance calculation outdated?