How to get this color temperature [closed] 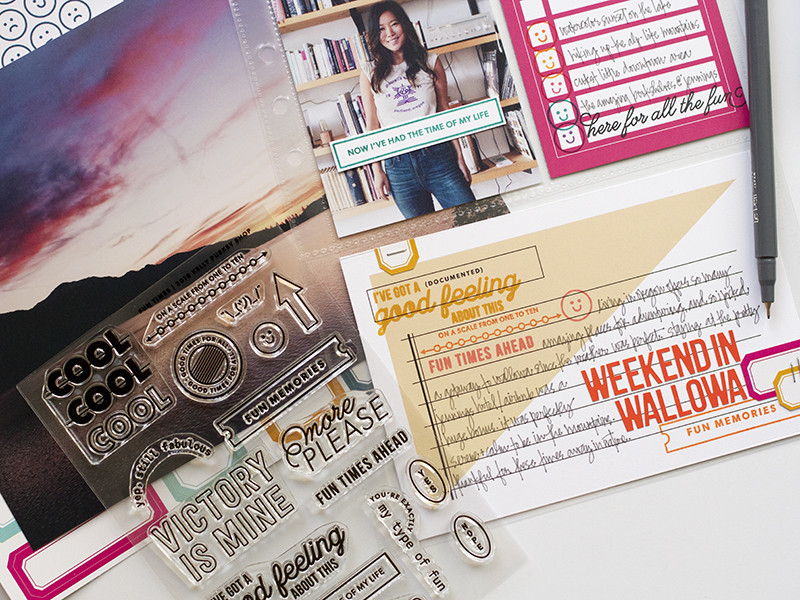 I suspect in your case what has gone wrong is the detection of what was white in the image: I think the big chunk of blue sky in the top-left has fooled something into thinking that this was white, and deciding that the colour temperature was that of the sky (which is not a very good black body in the first place, but in so far as it is has a very high colour temperature).

A digression on the physics of colour temperature.

The 'colour temperature' of something refers to the colour of an ideal black body at that temperature would have. This colour in turn depends on the spectrum of the black body, which is given by Planck's law. For a body at 5600K this looks like this, for instance: 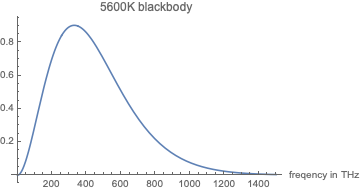 This spectrum will be perceived by humans as very close to white, as the Sun is at about 5600K (note that our eyes can't perceive some of the lower & higher frequencies in this spectrum (IR & UV), and the spectrum which makes it through the atmosphere is somewhat different than this (and indeed the Sun is not an ideal black body and has spectral lines &c &c).

Black bodies which are hotter are bluer, and ones which are cooler are redder: here are spectra for 5600K and 13750K (note these have been scaled to be approximately the same height: in real life an object heated to 13750K is a lot brighter than the same object at 5600K!): 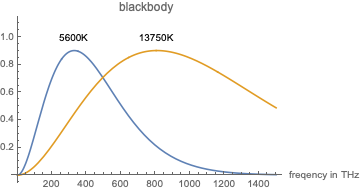 So, OK, so much for black bodies.

There is a subtlety with colour temperature: our eyes don't see the full colour spectrum, but rather take three overlapping samples of it. This means that spectra which are not at all like a black body spectrum can still look to us indistinguishable from one: so long as the light triggers the same response in our eyes, we can't tell. So things like 'white' LEDs don't have spectra which are very like black body spectra at all, but we see them as white (and there is yet a further subtlety here: even though we see the LED as 'white', if its light reflects from something coloured, we may see that as a very different colour than we do under a real black body 'white' source like the Sun or a tungsten light.

And this has to be guessed, again, from only three channels of information which can be fooled in various ways (and which are not completely the same as what our eyes see). Unsurprisingly this often doesn't work very well, even when it makes sense (ie even when there is a well-defined colour temperature at all).

28
How do popular free RAW editor/converter compare to each other on Windows?
9
In ufraw, how to use the two curves?
6
Batch RAW processing in Aperture 3?
10
Are there written guides or rules of thumb for setting color saturation, clarity, vibrance, etc. in post-processing (or in general)?
0
Weird color when dark area is brightened up?
1
How to get back from a print to an image file
6
Unclear whether grey card can be used for exposure in post production?
13
How to edit my RAW photo to make the stars come out more?
4
Is knowing the Sun color temperature enough to get the right white balance?