How do I identify an old unlabeled roll of 120 film? 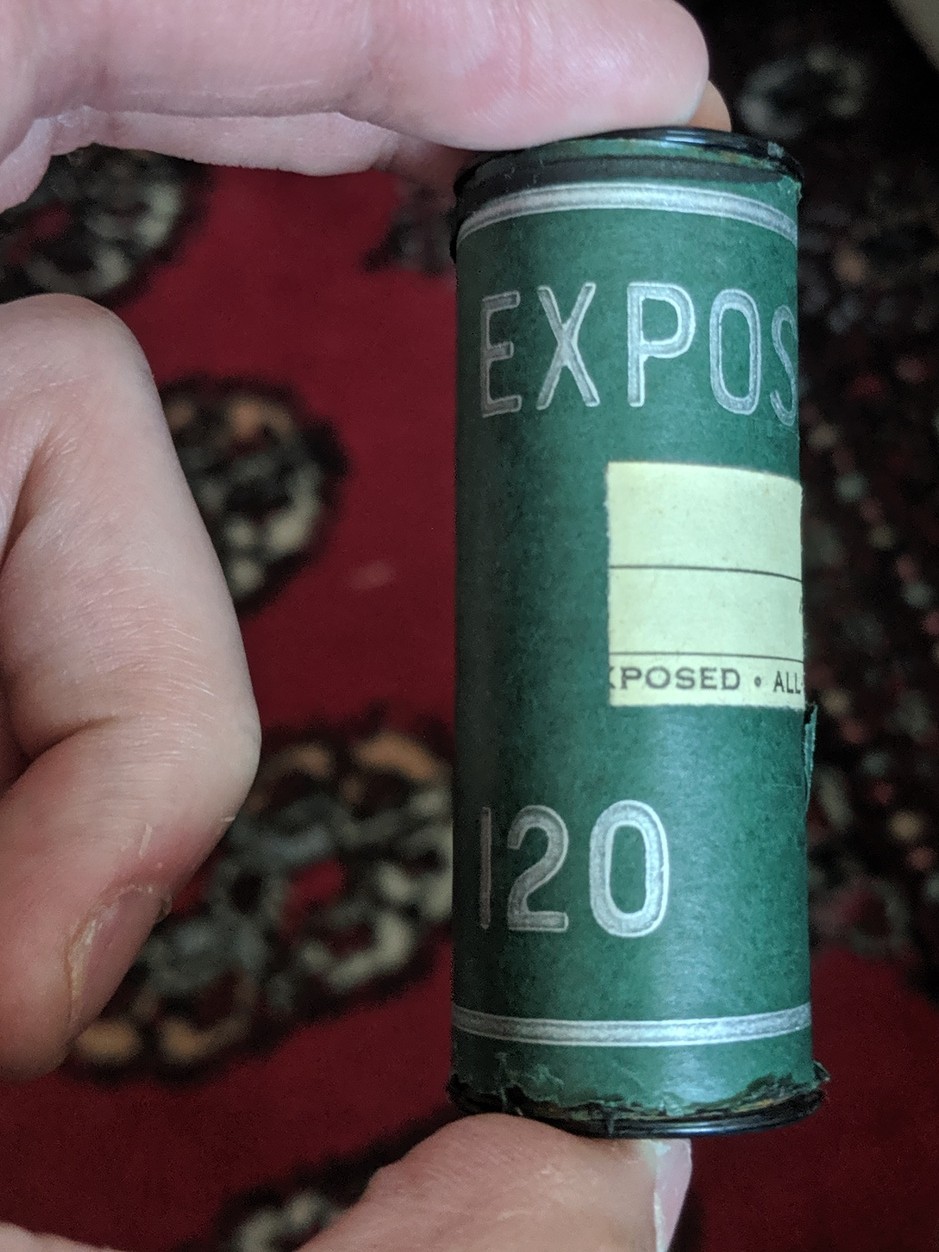 Assuming you have a 120 tank, then a good approach would be to load the film into the tank which will leave you with the strip of backing paper. The chances are that somewhere on that paper it says what the film is. You may also be able to work out from the backing paper &/or the camera about how old it is, which will give you a chance to work out how faded the images will be & how much extra development time you'll need.

Obviously this trick will not work if you are planning to get it commercially processed, or if it's colour (unless you can process colour), but it probably is not colour.

I waited to suggest this. Here's a long shot (bad idea) that you might want to try to identify the film.

Before going any further, I have done this myself more than a couple of times for different reasons. The first time I did this, I learned that 120 is only fastened to the head end of the backing paper. You will have to deal with this. I know of no exceptions.

Do I need to say that this must be done in a darkened room or film changing bag? Okay.

This complete procedure must be done in complete dark. Test by sitting in the darkened room for at least twenty minutes to let your eyes fully dilate to find light leaks that can affect your success.

Now, my suggestion is to rewind the film so that you can see the front leader to identify the film. I have searched the Internet and practically every manufacturer has this information on the head-end of the backing.

Rewinding the film (to heads up) will let you postpone the processing until you can positively identify the film stock. If, after doing this, you don't find any information on the head end, you still have a relatively compact spool of film to handle.

Notes: If you don't have another spool, you'll want to find a clean container for the backing paper and attached (at the head end only) film. If any dust does end up on the film, there's a good chance that the processing solutions will help remove that during processing and wash.

With no 2nd spool: As you unroll the tail-up backing, and come to the tail-end of the film, it will want to stay curled, work loosely to take up the selvage until you can free the spool to re wind it head-up on the spool. You might even want to wind it onto something like a core from bathroom tissue temporarily.

At this point, you'll want to let us know how it turned out and what kind of film it is.

Be sure to re-label the film "EXPOSED" and tape it closed.

Not the answer you're looking for? Browse other questions tagged film developing processing or ask your own question.

5
Has this cartridge of Super 8 film been used or not?
6
What is this old film and how do I handle it?
1
What is this camera / Can I develop the film?
4
How should I develop old 120 film that has no indication of color, ISO, or process?
2
How well does old Agfa Dia Direct film hold up in storage?
79
Is it worth trying to process film shot in 1989? (Fall of the Berlin Wall)
3
What process should I use for developing old (Ferrania?) CR50?
1
Would it be possible to cross process Kodachrome film?
3
Poorly scanned or poorly shot film roll?
4
Developed 35mm Film Green Tinted instead of Orange