I'm thinking of using the 24-105mm lens with the EW-83J lens hood intended for another lens, because the 24mm lens hood (EW-83H) needs to be relatively small due to the wide angle, and therefore, it doesn't offer as much protection as the EW-83J hood. Of course, using the lens on a full frame camera really requires the EW-83H hood so I'm not planning to throw that away.

I have been looking at the lens hood mount, and the diameters (81mm inner, 84mm outer) are the same, and the number 83 in the model number (whatever that means -- I couldn't find any 83mm dimension in the mount mechanism) is the same too. The lens hood mount mechanism seems to be identical. However, I'm afraid that if I try mounting the EW-83J hood on the L lens, it could get stuck due to some difference in the mounting mechanism I couldn't see.

Yes, because you are using a crop camera, you can use the EW-83J hood on your 24-105 without any vignetting or other effects.

Here is a chart that shows many other alternate lens and hood combinations. 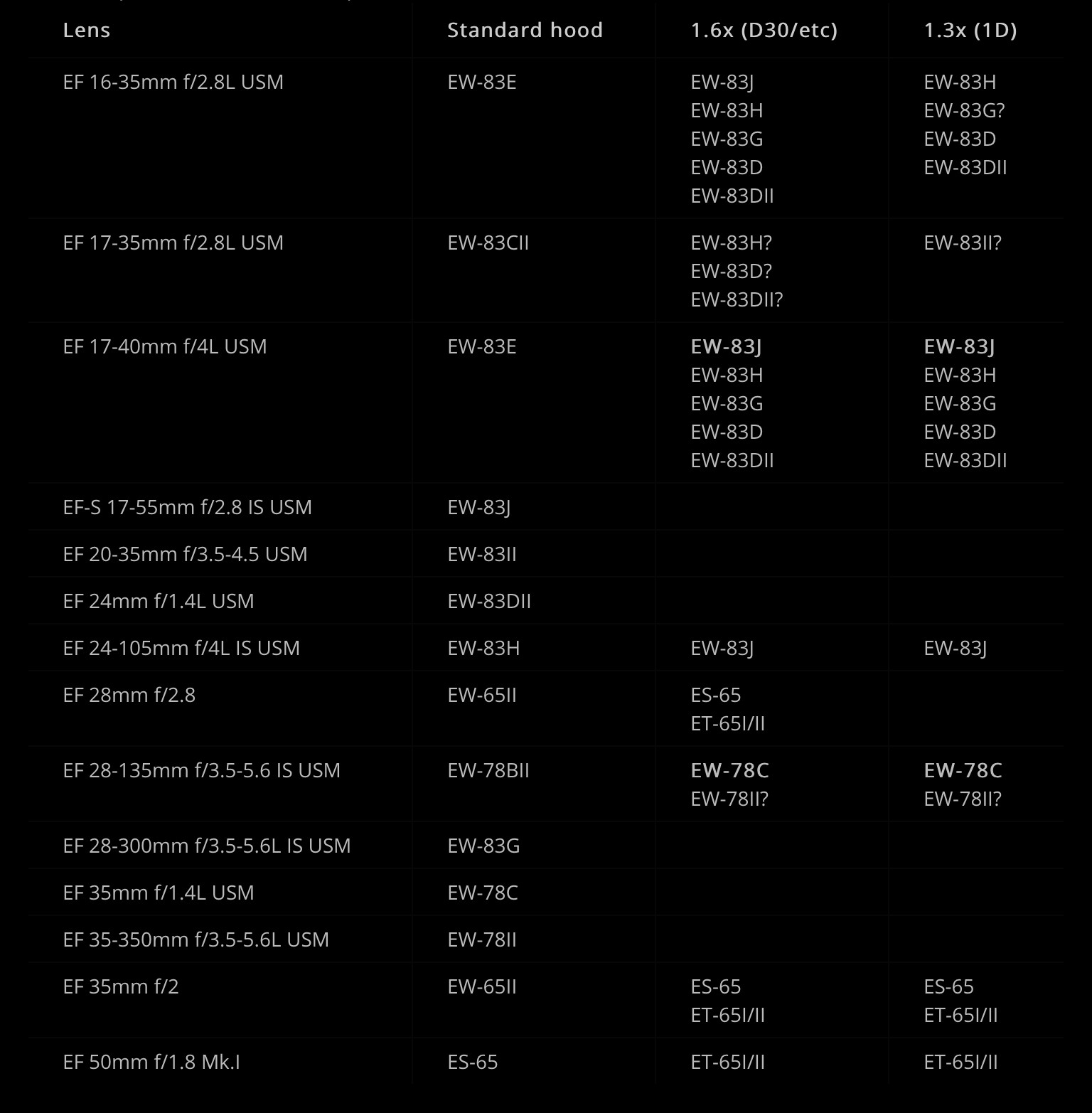 There are a few exceptions for hoods that do not use the typical bayonet style attachment. For instance, the ET-65III made for the EF 85mm f/1.8, EF 100mm f/2, and several other discontinued lenses that presses straight on with release buttons is not interchangeable with the bayonet twist-on style ET-65B for the EF 70-300mm f/4-5.6 IS.

Not the answer you're looking for? Browse other questions tagged canon compatibility lens-hood or ask your own question.

6
Do I have the right lens hood for my Canon 1000D with EF-S 18-55mm kit lens?
4
As a Canon DSLR user hoping to move to full frame do I have any wide angle lens options other than the Sigma EF 12-24?
4
Which Canon lens combination should I buy for landscape photography?
4
Are there objective tests showing the the impact of a lens hood on image quality where there is no obvious flare?
1
Best image quality non-prime walk around lens for travelling with a Canon crop dSLR?
10
Is my Canon EF-S 15-85mm IS USM lens defective or par for course?
0
Nikon lens with an adapter vs Canon lens on a Canon body - image quality difference?
0
How to decide between 28/1.8 non-IS and 35/2 IS to complement 50/1.8 non-IS on Canon DSLR?
0
How can I tell if this “2 in 1” lens hood and cap will be effective on my lens?