Why do even high-end cameras often still include normal (non-cross-type) AF sensors?

Looking at a breakdown of some of the highest-end cameras, even in a space where prices are well into the four digits, there's still a decent amount of normal-type AF sensors:

Given that even in these super-expensive flagship and high-end models, around 1/3 of the AF sensors are still very consistently normal-type, I'd like to know; is this a purely economic design choice, or does packing too many cross-type AF sensors create exponentially difficult technical hurdles?

Non cross-type AF sensors can be either vertical, horizontal, or even diagonal. Some very early AF film cameras with a single center AF "point" used a diagonally oriented line.

Each "normal" AF "point" is a pair of lines that collect light from the same "point" in the camera's field of view that enters the lens on opposite sides of the lens' front element.

A "cross-type" AF point uses two pairs of lines, one vertical and one horizontal.

This "map" is of the Canon 6D AF system. The small black squares are all that are visible in the viewfinder. The blue rectangles (along with the orange one at the center) indicate the actual area of sensitivity for each AF "point." 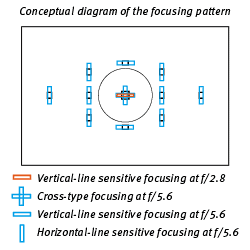 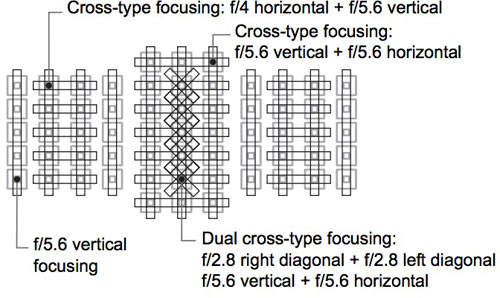 Again, the light gray squares are all one sees in the viewfinder, but the black lines show actual areas of sensitivity.

Here's what the AF sensor array used in those cameras looks like. 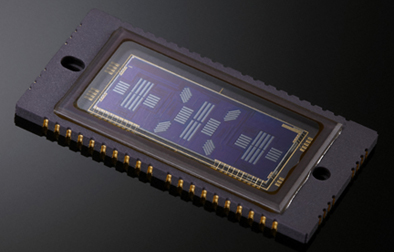 The lines for each AF "point" don't need to have a physical correspondence to their location in the camera's viewfinder because microlenses at the entry of the AF unit redirect incoming light to the correct line on the array. You can see that the diagonal lines for the diagonal f/2.8 sensitive parts of the center five "points" are spread wider apart than the horizontal/vertical lines for the same AF "points". This wider spread between the each line is what makes them more sensitive at f/2.8 and also what makes them not sensitive at apertures of F/4 and narrower.

Here is the microlens array that sits over the AF sensor for the simple "9 point" AF system of the original Canon 5D (images of arrays of the "splitter" microlenses seem very hard to come by - I can't find any of the ones used for more advanced AF systems): 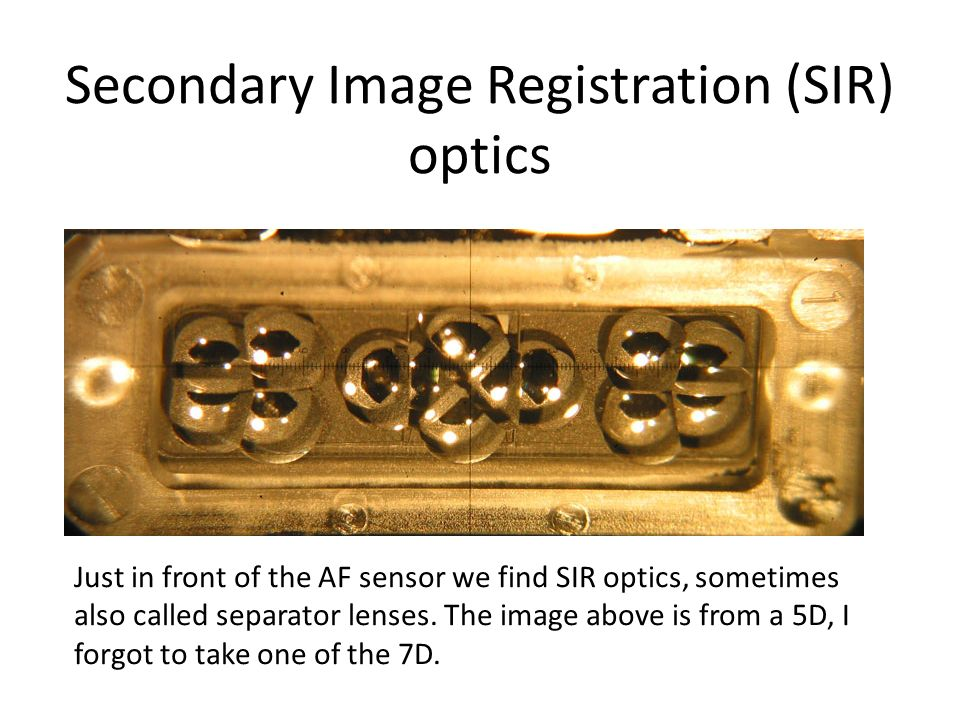 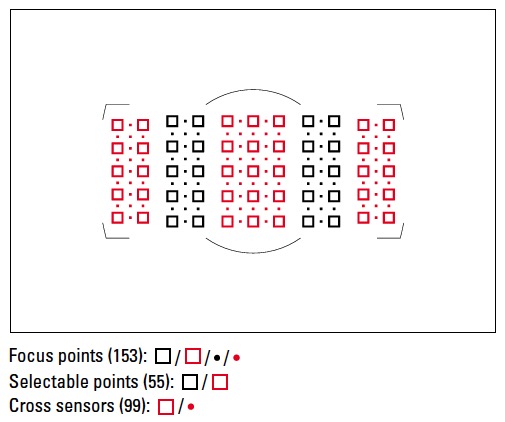 So why would such expensive and advanced cameras include some AF points that are not all cross-type?

It's partially economics, because adding more AF "points" does cost more, but it is also partly due to physical and design constraints.

Assuming a lens is properly aligned (each element is centered with no tilt or spacing errors) and pointed at a uniformly bright field, the center AF "point" will always get the most usable light. As one moves away from center, the amount of light will fall off - and so will AF performance of otherwise identical AF "points". It's all about angles and some of the same things that causes brightness to fall of on the edges and corners of a lens' field of view.

There's also the amount of data processing needed for each AF "point." At some point the law of diminishing returns kicks in and the extra processing power needed to make all 61 AF "points" or all 55 AF "points" cross-type points can be better put to advantage doing something else, such as combining distance information from the PDAF sensor with color information from an RGB+IR color sensitive metering sensor to assist in tracking moving subjects. This is something cameras such as the 1D X Mark II and D5 do extremely well.

So in the end some of the design decisions are based on how finite resources can best be used to give the camera's AF system better overall performance for specific tasks.

Canon, for example, has a few bodies that are lower end than the 5D Mark IV or 1D X Mark II which do offer all cross-type AF points. The 80D, 77D, and even Rebel T7i/800D all share a 45 point AF sensor with all cross-type "points." The 6D Mark II uses a FF version of the same PDAF sensor array. 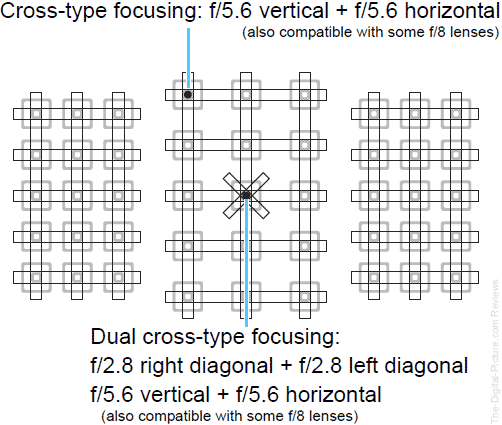 The Canon EOS 7D Mark II has 65 all cross-type AF points, but only one dual-diagonal "point" in the center, so it needs 132 pairs of lines. Compare it side-by-side to the 61-point system used in the 1D X Mark II, 5D Mark III, and 5D Mark IV.

There's a lot of good information about high performance AF systems, including comparisons between the 7D Mark II, and the system shared by the 1D X Mark II, 5D Mark III, and 5D Mark IV in Autofocus section of The-Digital-Picture's review of the Canon EOS 7D Mark II.

We've also got a few other questions here at Photography SE that look at various aspects of PDAF using dedicated AF sensors:

Does autofocus work better with f/2.8 lenses vs f/4 or slower?
Are cross-type focus points more accurate, or just faster?

18
Why does Canon and Nikon limit or disable autofocus beyond certain f-numbers?
49
What apertures are required to enable autofocus, including cross-type or high-precision focusing, on Canon DSLR cameras?
17
Where can I find advice on using an advanced AF system for wildlife and bird photography?
2
Which one is better - more cross-type sensor or better sensitiveness of cross-type sensors?
8
Why do DSLR cameras still use monochrome LCD as their top displays?
1
Best settings to focus in low light and low contrast condition
2
Why aren't multi-aspect sensors commonplace on high-end cameras?