Is this blur normal?

Ever since I got my Canon EOS 760D, I felt like my images weren't as sharp as they were on my Nikon 1 V1. I hadn't used my 760D for a long time, but on recent photos I felt as if it was worse than it used to, example: 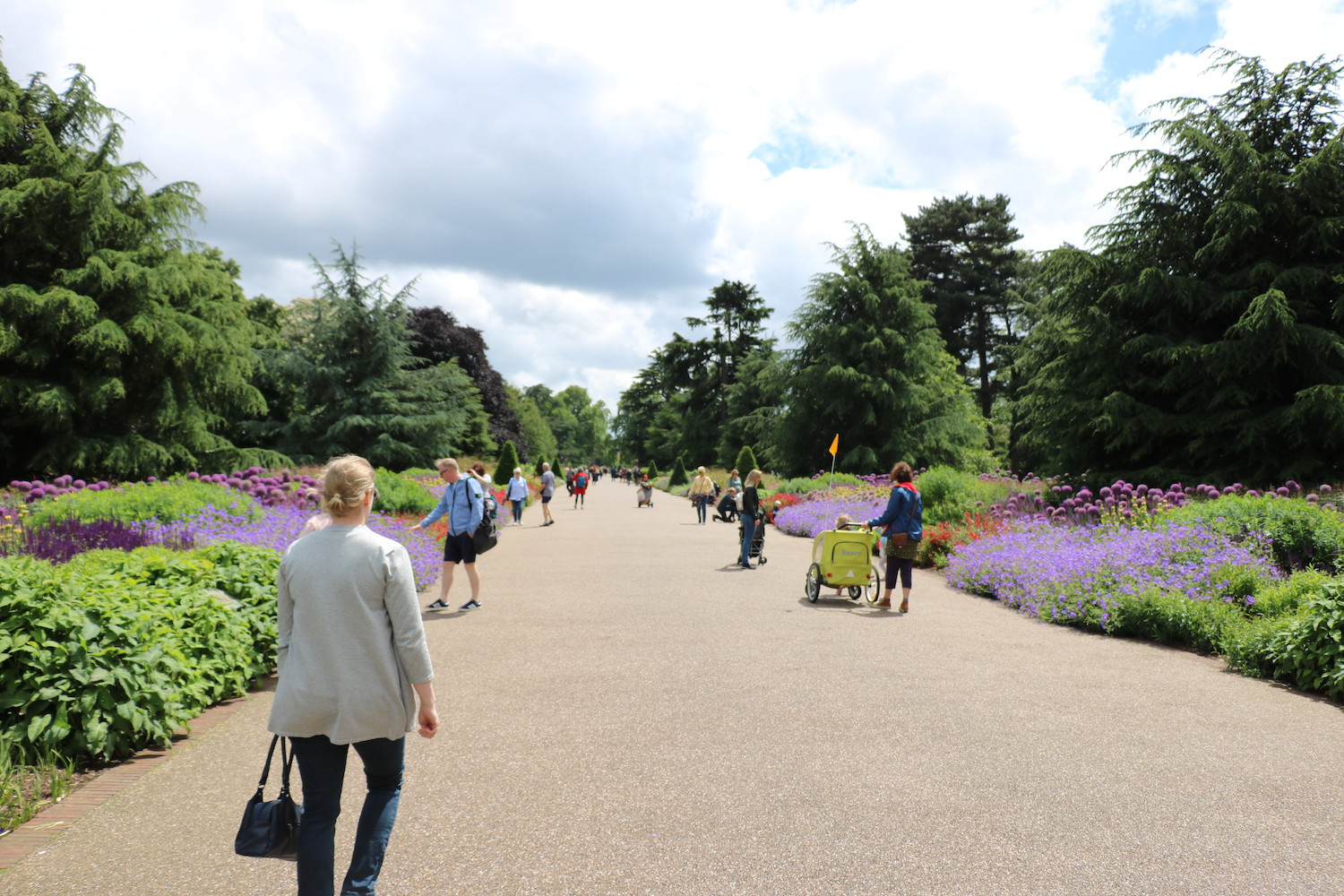 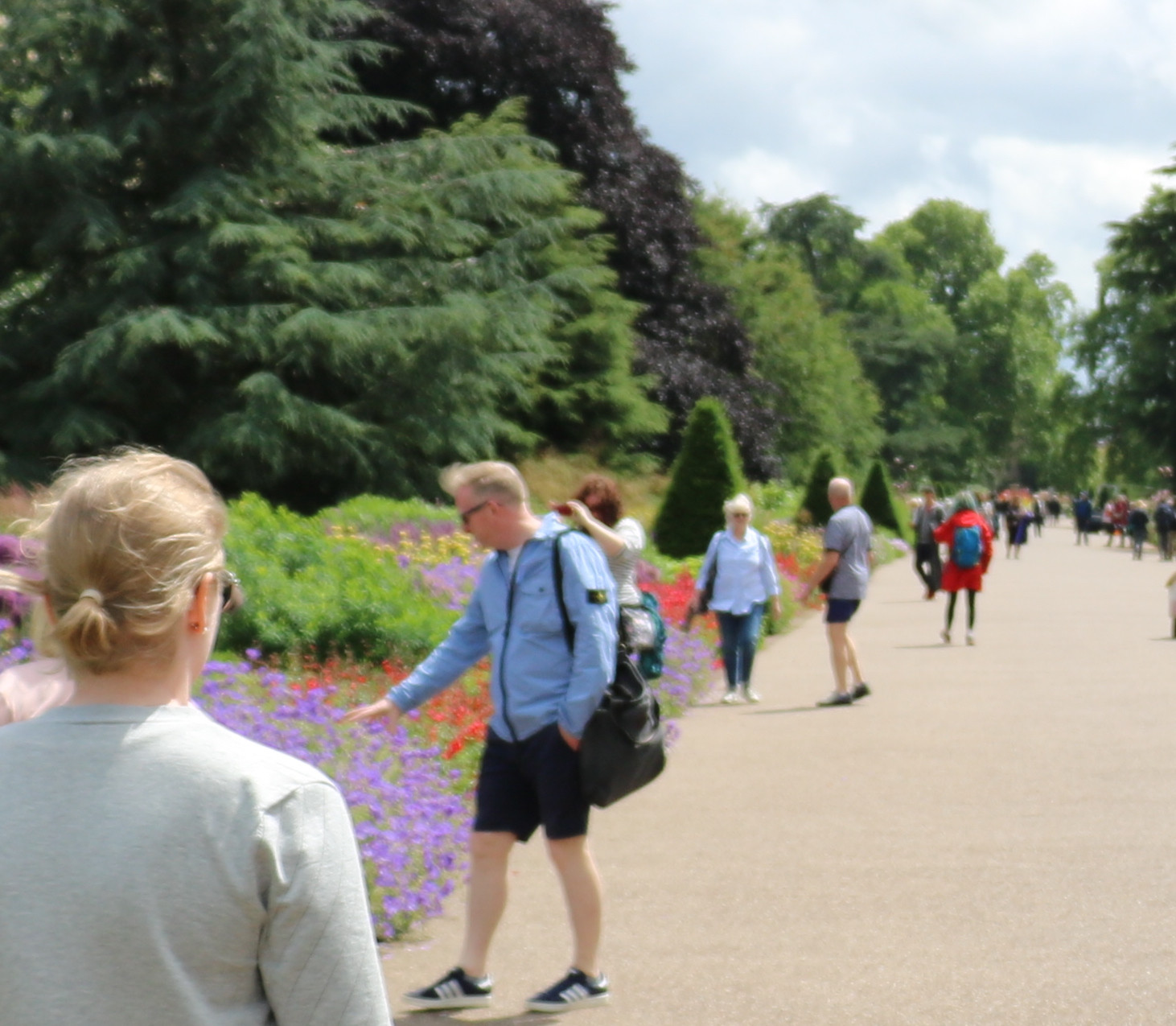 To me, it's as if the out of focus parts have some kind of bloom, it even seems as if some parts are "doubled" (edges).

What do you think?

I'm going to try spin some of the comments into an answer, even if this does eventually end up being marked as a dupe of Why are my photos not crisp?

From your settings, 1/1000s, f/4, ISO 100 at 18mm then motion blur is probably not the principal cause. Autofocus error is a much more likely candidate.
There is some slight aberration at the edges of the frame, but I don't think this is a major issue, considering the focus is off.
Wide angle lenses don't really lend themselves to beautiful bokeh anyway.

It looks like the camera chose the woman in left nearfield as the point of focus, which then will leave the entire 'subject' ie the garden itself, out of focus.
After comments - I think it's quite possible that the autofocus selected the woman whilst she was closer to camera. She then took another pace or two before the shot was taken, leaving even her just slightly out of focus too.

Practically, this could have been ameliorated by either forcing the camera's focus point to a specific area of the frame, or by manually focussing somewhere in middle distance. At 18mm f/4, any focus point more than 5m away would be as close to infinity as makes no difference for anything over 2.5m away.[1]
Opening the aperture still further would have softened the foreground, which may have better pushed attention towards the garden itself, & softened the foreground distraction.

Aesthetically, I'd have waited til she got right out of the way.
Even in a busy place sometimes standing there for 5 minutes might give you just one good opportunity with no-one near enough to distract..

[1] See the DoF calculator at Cambridge in Colour

Factors that contributed to overall blurriness in the example image:

Ever since I got my Canon EOS 760D, I felt like my images weren't as sharp as they were on my Nikon 1 V1

Is that the Nikon 1 V1 has a smaller sensor and because of that it's harder to "get out of focus".
This means your in focus area is much more tolerant and the camera will give you a sharper overall image.
Note that with 'sharper overall' I mean anything from near to far will be better in focus, kind of like with a cell phone.
It's hard to get any bokeh at all if your subject is even just a few feet away.
If you go very close a small sensor camera can give you bokeh.

I believe "the problem" is that you need to learn how to use a larger sensor.
If you want a "cellphone picture" (with everything in focus) then you need to close that aperture to f8 or f11.
If you want to take a portrait photo open the aperture as much as possible.

My intention is not to insult you now, but this kind of photo of nothing straight out like that is not what a larger sensor camera is meant to be used for. At least not without a subject that helps focus the eyes.
Use a point and shoot (or phone) with a smaller sensor for that or close down the aperture (meaning don't use auto mode).

The auto mode is not your friend when you use larger sensors.

The problem in the picture is that the auto-focus chose the woman on the left as the primary subject, and everything beyond her is blurry. So in a sense, that blur is normal -- it's what the camera decided to do with that subject. It got fooled.

For complex subjects like this one, I use a somewhat manual mode. I set my camera to use a single focus point rather than its default dozen-or-so. That way I decide where the focus should be. I aim the camera at the object that should be the main focus and press the shutter release halfway down, and check that the lit-up focus point in the viewfinder is on that subject. Then, holding the shutter release halfway down, I recompose to get the framing that I want.

Not the answer you're looking for? Browse other questions tagged blur or ask your own question.

6
Is there a theory behind 'Blur Detection'?
21
What's the difference between Bokeh and Gaussian Blur?
1
Is there any tool to easily blur a picture?
2
Can average and gaussian blur be caused by optics?
2
Are there any good “dispersion blur” image filters?
3
Was the background blur in this image done with a Petzval lens?
1
Nikon D3000 Blurry Pictures. Focus Issue?
1
How does anti-blur software work?
0
Remove or reduce blur in an image
0
How can I fix the blur in this photo?