How to manually rewind film?

I am pretty new to the film camera game and have a Pentax Espio 115. I’m not used to all the terminology yet, so what I say may not be correct term. On my most recent film, my camera has stopped on the 24th slide and then would not continue shooting. I have diagnosed this problem and will take my camera to get fixed. However I have never wound film up manually and I’m struggling to do so. Can anyone help me? I’ve used a fujifilm X-tra 400. I am aware that the film exposed will be lost but would like to retrieve the rest of the film. 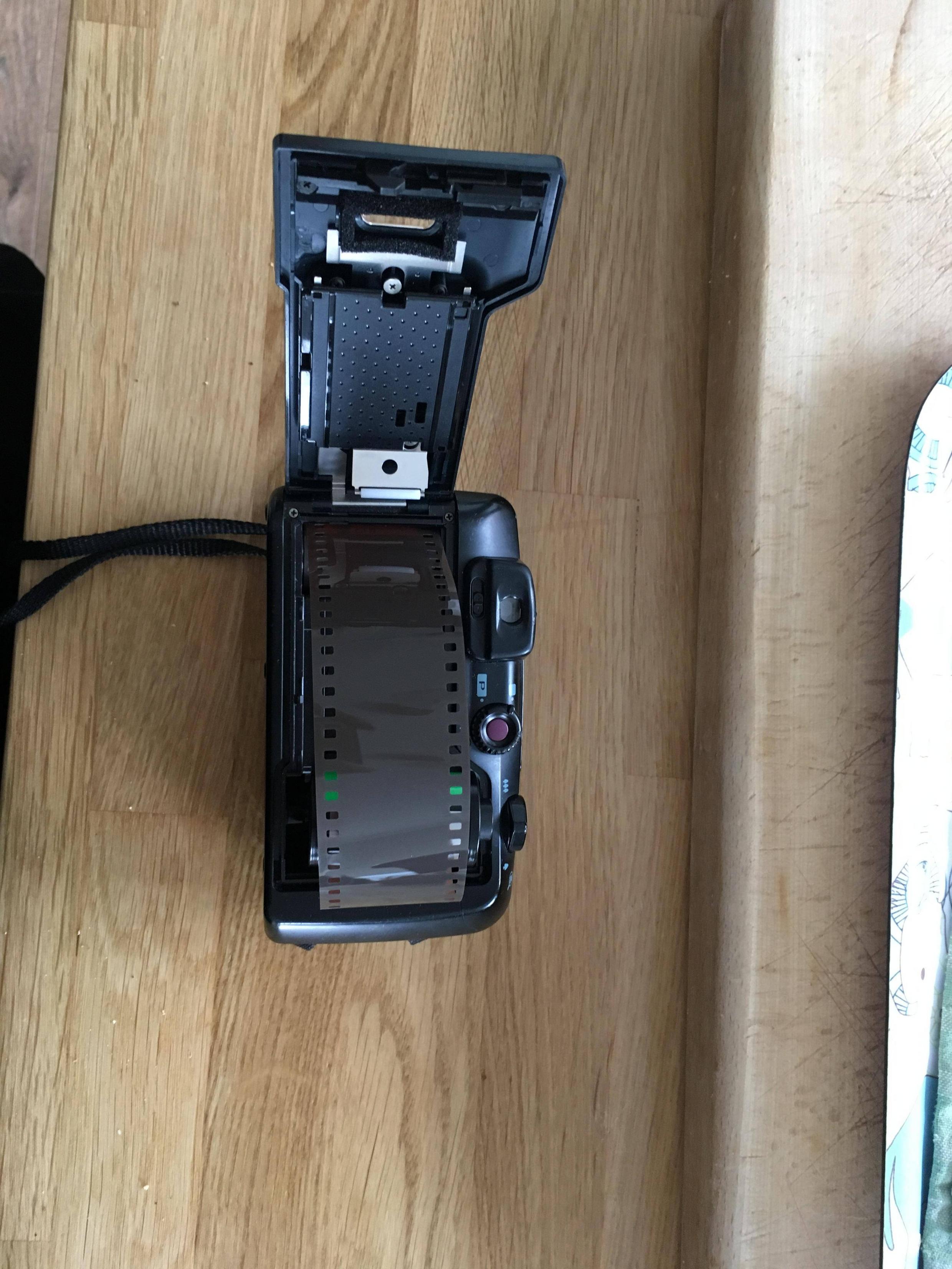 I've seen P&S cameras use up a roll in two ways:

The manual for your camera leads me to believe that it uses method 2 above.

The problem here is that, if your camera does use method 2, then every frame you've shot is sitting on the take-up spool and was fogged/burned¹ when you cracked² the back. These frames are lost and there's no point in even attempting to get them developed. The only way you have any frames worth saving is if you got the camera to rewind some frames before you cracked² the back.

If I'm wrong and your camera uses method 1 above, then the frames you've shot are safely stored in the cassette as you shoot them and you can do as Alan says - simply cut off the exposed portion and go get what you have shot developed.

General best practice when shooting film - carry a change bag with you (something like this). They're inexpensive, fold up small, and weigh very little. Easily carryable in your camera bag.

If this ever happens to you in the field, use the change bag to crack² the camera in total dark, yank the film, and rewind manually - so that you can save your shots.

1: The use of the term burned in this context is slang for severely overexposed, to the point that the entire frame appears as one large dark spot. Thus, appearing "burned."

2: The use of the term cracked in this context is slang for opened the camera back.

Normally, one must do this in a completely dark room or closet by physically removing the cassette and pull the film from the take-up spool in the camera.

Before you do, take note of the number of photos taken from the camera film counter.

Try to avoid touching the emulsion side of the film. You can use the edges of the film and slightly "cup" the strip of film for a better grip.

Pull the film free of the camera body.

After the film is wound into the cassette, you can turn lights on.

When you've diagnosed and fixed the problem, reload the film and with a film cap covering the lens to prevent exposure, dry-shoot and advance the film beyond the last photo taken. Maybe give a frame or two more to ensure enough room between your last shot and the new ones for the rest of the roll.

Wait just a minute! Let's speculate that the film remaining inside the cassette was not fogged to light by this fiasco. It is not necessary to rewind fogged film into the cassette. Using a scissors, cut the film about 3 inches (75mm) from the lip of the cassette. Now you can take this film to a photofinisher. The cassette with 3 inches of protruding film can easily developed, no special attention needed.

Now a word of caution! Film remaining in the cassette might have been fogged, so don't get your hopes up. Think about this! You need one or two rolls of sacrificial roll to practice with and to test your diagnosis. If the remaining frames on this film are of no real value, I suggest that you consider using it as a practice roll.

Not the answer you're looking for? Browse other questions tagged film pentax or ask your own question.

3
Creating Proper Exposure with a Pentax PZ10
2
Should the exposure count rewind with the film rewind knob for Nikon film bodies?
7
What happens if I press the film rewind button early?
6
Which DSLR macro setup to buy for scanning negatives?
0
Manually rewind unused film to its canister
1
rolleiflex tlr film rewind lever stuck
1
Film did not rewind
7
What surfaces have been used to capture images in analog photography?
2
Did i accidentally rewind my film?
1
Lenses/camera recs for documenting art