I recently cleaned my Canon 50mm f/1.8 STM lens using eyeglasses cleaner and a microfiber cloth. A few minutes afterward, I noticed condensation inside the lens, so I placed it in a safe place and let it dry out.

The problem: When I connect the lens to my camera (80D), it reads that the aperture is always "00", and gives Err 01 when I try to take a photo. Other lenses still work fine.

What I have tried: 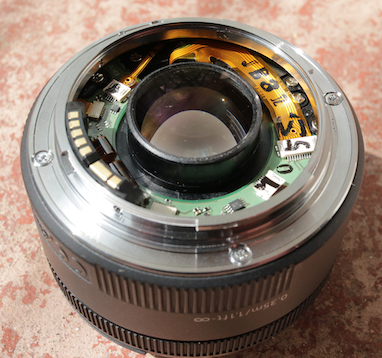 Is this a known problem, or is there a known solution? Please help, any suggestions are appreciated.

If the problem is sporadic, then maybe it could be caused by dirty contacts.

That said, statistically speaking, that error is nearly always caused by a torn aperture ribbon cable. A loose cable connection or a cold solder joint at either end of that ribbon cable could also potentially be the cause.

It is extremely unlikely that this failure was caused by condensation or any other sort of moisture — unless by condensation you mean "I accidentally dropped in the ocean, and it worked fine for a week, so I thought everything was okay," in which case obviously corrosion is a possibility. But realistically, it is probably just a mechanical failure of the aperture ribbon cable, and that cable needs to be replaced.