What kind of appearance can I expect if I both overexpose and push film?

I am thinking of doing this to these films:

What kind of look can I expect from the final result?

If you are setting your meter to ISO 50 while using ISO 100 film and following its recommendations, you're overexposing the film by one stop. If you are then overdeveloping by one stop, your developed negatives will be approximately two stops denser (darker) than nominal. When you scan such negatives and reverse them to positives, the resulting images will look washed out with no dark shadows (unless the scene you shot had a very wide dynamic range).

I understand overexposing reduces contrast and I am pushing to counter that.

Overexposing by one stop and then pulling development by one stop will reduce contrast compared to exposing and developing nominally. This works well for very high contrast scenes. If the original scene was not high contrast, the result will look dead and lifeless. Increasing development of such an overexposed film will just make the dull, lifeless result grainier and have even less highlight detail. Once reversed many areas will be an unrecoverably uniform "paper white" with no detail in them.

What happens if you overexpose and over develop (push exposure with push development)?

The Online Darkroom: How to read a negative shows this example: 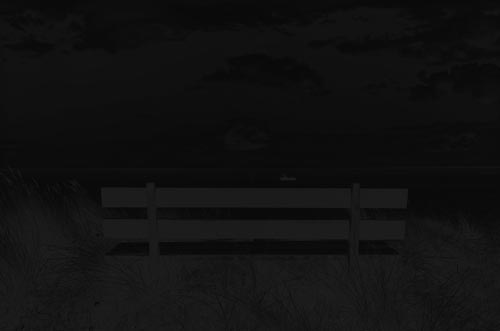 Don't do it unless you are compensating for long expired film.

Push up, pull down.

What happens when you push or pull depends on what you're pushing or pulling. Use of the terms with respect to development is fairly common and understood by most people. Use with respect to other aspects of photography can be confusing.

As with the exposure triangle, pushing or pulling during exposure is compensated with a complementary action during development to maintain "proper" appearance of the negative.

To add to the confusion, people often speak of pushing or pulling film without specifying exactly what they are pushing or pulling. In these cases, they are typically referring to the action in terms of development along with the compensatory action for exposure. For instance, by "push" they mean that both push development and pull exposure will be performed.

When dropping film off at a lab, it's safest to tell them specifically what ISO you shot at. Then let them adjust development appropriately. If you don't tell them anything, they will assume "box speed", the ISO as labeled on the cassette.

A dense, contrasty negative with blocked-out highlights and more grain than you'd normally expect from the film.

I'd be curious to hear why you want to do this and what your workflow will be after the films are developed – conventional silver prints or scans perhaps? The usefulness of the negative is determined by what you want to do with it afterwards.

According to Evaluating your negatives:

An overexposed negative that is overdeveloped appears extremely dense and sooty and is laughing referred to as "bulletproof". The grain will be very excessive for the film used and the highlights will be unprintable. There is almost no way to make full scale prints from such a negative.

As has been stated, in most cases, this is a bad idea. However, if you plan to cross process C-41 films to E-6, then what you’ve listed is a starting point.

A bit more on your examples:

Delta 100 exposed at 50, overdeveloped +1 - You'll get dark, dense negatives. Highlights will probably be blocked. This is just a bad idea in general.

Portra 160 exposed at 50, overdeveloped +1 & Ektar 100 exposed at 50, overdeveloped +1 - as these are both color negative film, we can treat them similarly. The overexposure at 1 stop won't actually cause any problem at all. Both of these films easily tolerate that. (Ektar proof: https://www.youtube.com/watch?v=jp4eJvTBjKU | Portra proof: https://petapixel.com/2018/02/05/test-reveals-exposure-limits-kodak-portra-400-film/) However, the overdevelopment will darken the image overall and increase contrast. That combined with the overexposure may compound the issue. In general, feel free to overexpose your color-neg film by a stop but please, develop normally for best results.

the textbooks say this is probably a bad idea, I know of one photographer who has beautiful work who commonly rates is ISO film speeds lower to overexpose with both color film and tri-x black and white film... Johnny patience, who can be found online shoots Kodak tri-x 400 at ISO 200 to overexpose at one stop, henan has it over developed one stop and his tri-x shots are some of the most incredible I've ever seen. He even has a blog post on his website about this, along with giving several examples. Here is a post explaining this method http://www.johnnypatience.com/the-zone-system-is-dead/

You will blow out (make white) the highlights significantly. The colors will be difficult, if not impossible, to print correctly at automated labs.

Typical SUC (Single Use Cameras) back in the day had ISO 400 or ISO 800 film, and exposed it as if it were ISO 100. That way when they were used indoors in bad lighting the lab had a chance of printing them.

The cost of 'pushing' film (at least in my lab) used to be about a dollar, and we did it by turning off the motor drive for 30 seconds (I think). So it could be the only roll in the tanks.

I don't think you'll like the results. If you're looking for that glowing, highlighted look that you see sometimes in prints it was more commonly done with slide film and a slightly blurred, over exposed duplicate shot stacked underneath it.

8
Film ISO and Push/Pull Processing
2
Do film emulation presets assume a certain white balance setting?
9
Color film comparison: How does Fujifilm Superia compare to Kodak Portra?
4
How can I find the film speed and type of unmarked, exposed120 film?
11
What are the dynamic ranges of commonly available 35mm film?
3
B&W Negative Tray Developing: Uneven Development
1
What kind of equipment and skills are needed to take shots like these?
1
Why does a monobath work well for films that usually have significantly different process times?
4
How to store film before processing?