What happens if I develop a B&W film as color?

My friend accidentally did it, and got very interesting pictures with an aspect that reminds something akin to pictorialism. I would like to know more about the actual chemical 'impact', what actually happens in technical terms when using developing techniques for color film when having an actual b&w film. I think my friend accidentally used a B&W 35mm film (ISO/ASA 100 or 200) and apparently use the same for the camera ISO/ASA. 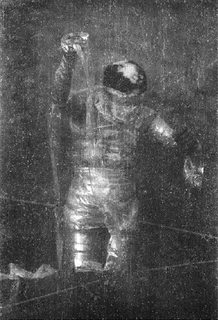 Developing a Black & White film as colour film will leave a dye image rather than a metallic silver one. The secret is in how colour coupling works on a silver image. In effect, you are going to produce a "stain" image similar to "pyrogallol"/"Pyrocatechin" developed images

There's one "color" process that might have produced an image like the one shown (though it appears the negative was "distressed" in some manner as well): that's developing with any of the three developers, C-41, E-6 First Developer, or E-6 Color Developer, then stopping and fixing with non-bleaching fixer (like conventional B&W fixer or C-41 fixer, not blix), without going through the bleaching step (often combined with fixing in home color developing kits). Any color developer will produce a silver image in any conventional film -- but standard color processes bleach away the silver to leave only the color dye clouds that form the final (either positive or negative) color image.

With no dye couplers in your B&W film, you won't get a dye cloud image, but if you don't bleach the silver, you'll still get a silver negative images, just like what you'd get in D-76 or Rodinal.

The only other way to get a B&W negative with a color process is to use a so-called "chromogenic" B&W film, like Ilford XP2 Super or the Kodak equivalent. These are essentially color films, but instead of three layers with filtration and different dye couplers, these films have a single layer of sensitive emultion, no filter layer(s), and dye couplers balance to produce a black image (by producing all three dyes in visually equal amounts). With these films, in a C-41 process, the silver image is bleached away and the dye cloud negative image remains, just as with C-41 color films.

Not the answer you're looking for? Browse other questions tagged film color black-and-white 35mm or ask your own question.