I've been researching this but can't find anything concerning these specific question I've found a lot of other interesting things though.

My questions are In the image wall street what type of DoF is he using I think he's using a big DoF but I'm not an expert, the last question what type of shutter speed was he using I'm not even sure they had shutter speed back then, but searched and saw it was invented in the late 18 hundreds. This is one of my favorite photo by him, what do you think? 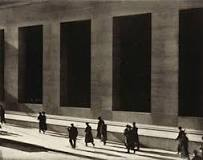 This picture was made in 1915, with a large-format camera (probably a plate camera). Estimating depth-of-field is slightly hard as he quite likely used camera movements to shift plane of focus so it lines up with the line of the building. It's also slightly hard to asses the shutter speed as the image has been printed fairly softly (Strand was in the process of moving away from pictorialism to modernism, and this photograph is one of the examples of that move). However there's nothing significantly out of focus in the image, so the answer is 'enough DoF, combined with movements, to keep everything in focus'.

It's possible to make some kind of numerical estimation: if you guess at a film (plate) speed of ISO 25, which is probably reasonable (although it's hard to get information about very old emulsion sensitivities) then you can see there is some motion-blur in people's feet, so may be an exposure of 1/8s or so. It's sunny, so using sunny-16 - 1 (25th at f/8) I get perhaps f/22 or f/32. Those would be reasonable apertures for a LF camera (all the shutters I have go down to f/45, and Group f/64 was called that for a reason).

As to a determination of the span of the depth of field for this image: Based on my expertise, this picture was taken from a substantially distant viewpoint. Likely the focus setting for this shot was at or near the infinity position. If true and I believe this is so, all objects depicted will be in focus. In other words, the span of the depth of field is moot. Your advised to research “hyperfocal distance” for more insight on this condition. As to shutter speed: On the date this image was taken, excellent shutters were available and their uses was the norm. One can guess the shutter speed, likely a moderate speed centered around 1/100 of a second

19
What are the criteria to decide whether a photo is “technically correct” or not?
8
Photo of an experiment
8
What went wrong with this concert photo and what could I have done to make it better?
5
What techniques and concepts did Jan Groover use in this photo?