What techniques and concepts did Jan Groover use in this photo? 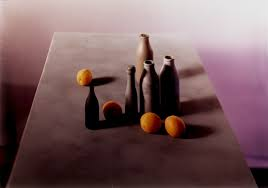 I found this photo today and really liked it, I'm interested in an analysis of this photograph I've chosen by Jan Groover.

Some questions are I have are what techniques are used in the creation and the composition of the photo. What ideas and concepts are involved?

It's quite a different photo so I'm interested to see what you guys think. The oranges definitely bring some vibrancy to the image.

edit: I was doing some more reading and found a good site if you want to read about her (biography) http://www.artnet.com/artists/jan-groover/

Without going into detail, which is probably a bit more involved than what stack exchange is designed to do, at the most basic level Groover appears to have used most of the collective knowledge gleaned from centuries of artistic painters, particularly those concerned with still lifes, about:

The big difference, of course, is that a painter can take artistic license with a scene and alter certain things to fit their purpose. A photographer, on the other hand, must actually create the scene in the way they wish their final image to appear. At least a "pure" photographer such as Groover would insist on doing so, rather than rearranging the items and upsetting the subtle interplay of shadows and light on each object later on using Photoshop or a similar graphic design program to radically alter the image more or less as it was captured.

That's not to say, though, that her images are "straight out of camera." The distinctive looks of the prints of what she captured had as much to do with the printing processes and papers she used as they did with what her developed negatives looked like.

Using large format film cameras allowed her to take advantage of the movements allowed by such cameras to alter the angle of the plane of focus with respect to the film plane and show the objects in the scenes she photographed as all in more or less the same amount of focus, the same way a painter would. Her printing techniques also tended to minimize the differences between those thing in sharpest focus and those things closer to the edge of the camera's depth of field. There are a few exceptions to this, such as Untitled, 1990, in her body of work.

There are volumes upon volumes that have been written about the history of painting still lifes. Groover would have studied some of them during her training as a painter before she took up photography.

A good place to start regarding her process might be Jan Groovers book Pure Invention: the Table Top Still Life - Photographs By Jan Groover. It was part of a "Photographers at Work" series published by the Smithsonian Institution. Each book included not only photographs, but also extended interviews with the photographer that delved into their methods and approach. From Library Journal (as quoted in the product description at amazon):

As Groover notes in Pure Invention , photography lends itself to division by genre, and it is along these lines that this new series, "Photographers at Work," is organized. The first four installments... each contain an interview, a portfolio of images, and a biographical essay augmented with an occasional technical note. Interview sections average 15 pages and succeed through well-phrased questions in eliciting technical information, as well as the photographers' thoughts on the image-making process. The format works well to integrate text and plates. Groover, known for her "constructed" still lifes, uses the platinum-palladium process, which renders a wide range of soft greys, giving her images the appearance of "relics" from some unknown culture, e.g., the image of a marble column on top of which sit a metal box, two apples, a rusty instrument of unknown function, and a seashell.

A good source for an overall look at composition for photography is Michael Freeman's The Photographer's Eye, which has been published in various editions over the years. Any of the editions beginning with the first "digital" version in 2007 are great.

6
What sort of color correction and effects are used in this photo?
12
What techniques has Jennifer Tibbetts used to make her photos “pop”?
8
What went wrong with this concert photo and what could I have done to make it better?
4
Reproduce picture on black background with soft light on face only
1
How did the designer achieve this Blue tint effect?
2
How was this photo taken (flare, blurred background)
4
What techniques and concepts did Joachim Froese use in this black and white photograph of a moth?