I have a lovely little No1 Pocket Kodak from about the 1920s or 30s. It is the bottom of the range model with the "Single lens". The aperture is not marked in f-numbers, but just labelled 1, 2, 3 and 4.

Is there a way of knowing the f-number equivalent aperture for gauging exposures with modern fast film (Ilford Delta 400)?

I'd like to use a 35mm camera as a meter, and figure out a conversion for the vintage camera. The more expensive cameras in the same range have f7.9 and f6.3 lenses, so I would guess it's higher than that? But I could imagine a cheap single element lens being quite bright, but sacrificing sharpness. 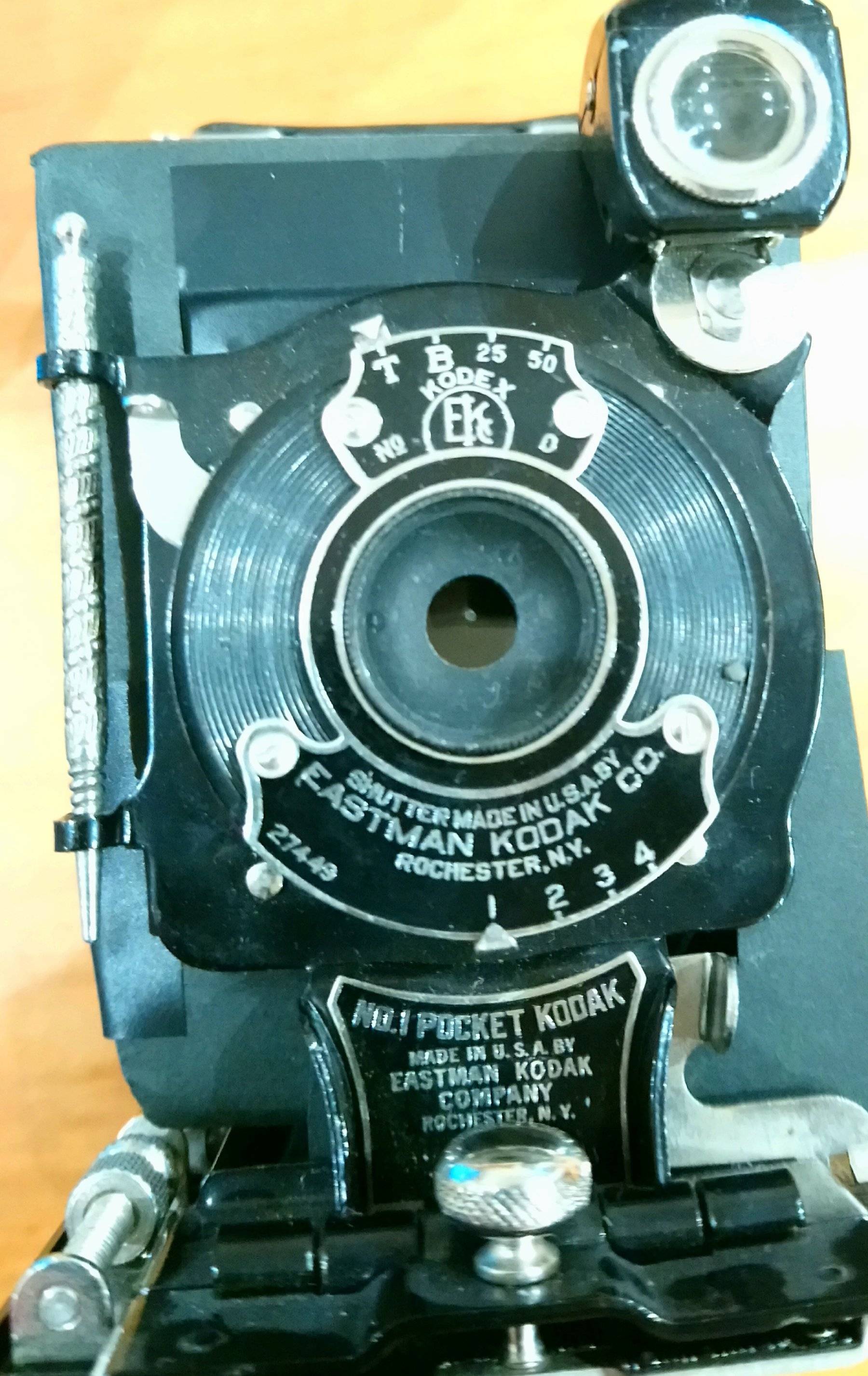 I've done extensive googling - but haven't found anything. It seems the other models in the range may have been more common than the "single lens".

I have the original manual, which includes 3 exposure tables for the 3 different lens options (single, "Kodar f.7.9" and "Kodak Anastigmat f.6.3"), the page for the single lens is reproduced here. I gather however that films of the day were pretty slow, so this would be likely to over-expose modern film. 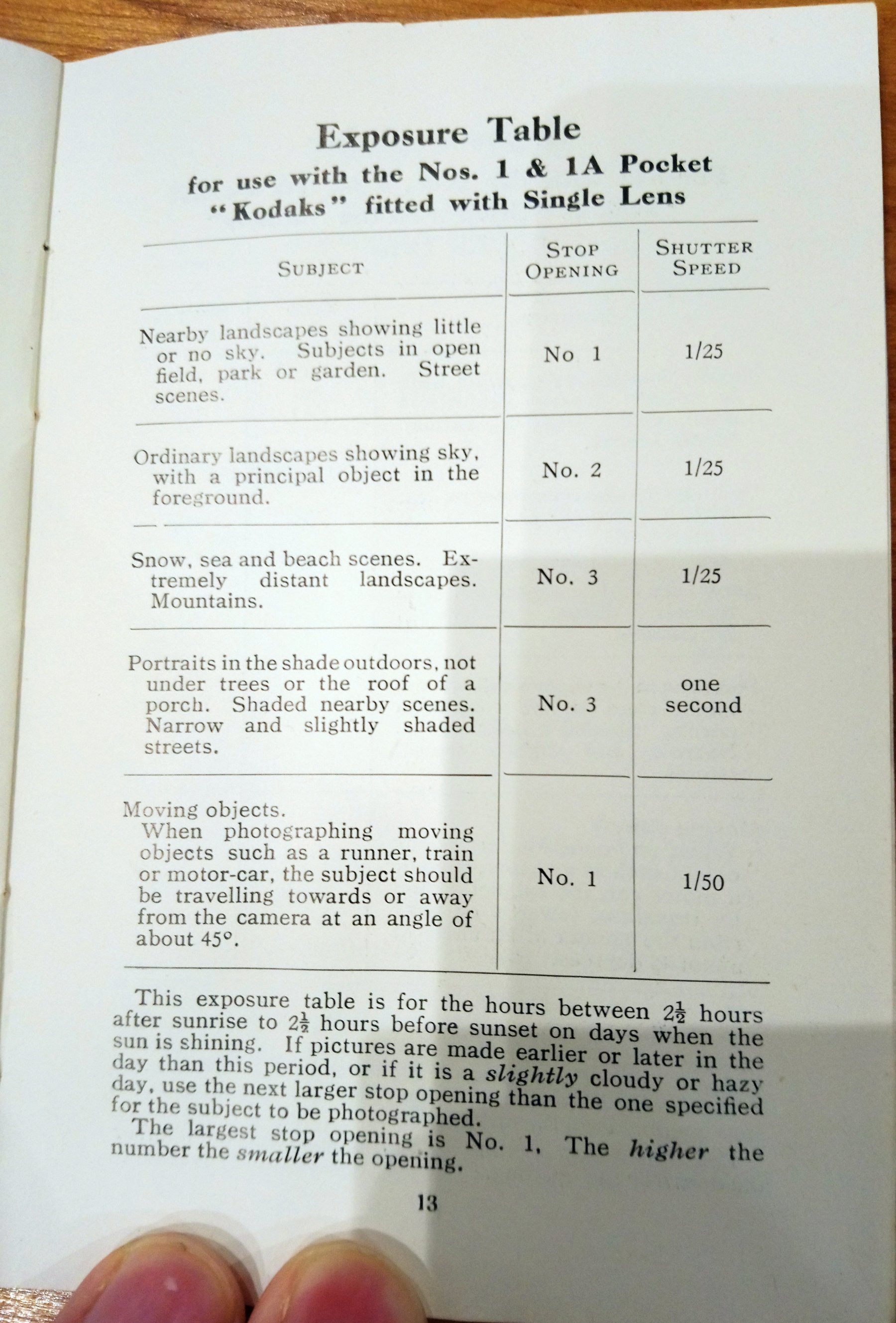 Other Camera details. It takes 120 film, and seems to work. I've run a roll of out of date Ilford FP4 through it, and got 4 or 5 really good pictures, but I was guessing and bracketing exposures in full sunlight. I think it says more about the latitude of film than my skill with the camera.

The plate surrounding the lens with the shutter and aperture markings has the number "27449".

If you're wondering why the bellows look strange in the photo, it's because they have some light leaks, so I've encased them in a black paper "waistcoat" which seems to block them out well enough.

I've got some fresh Ilford Delta 400, and I'm hoping to take portraits in natural light indoors (A very well lit room), the same conditions using a 35mm camera, with a cheap f3.9 lens using Ilford FP4, 125 ASA have had no problems.

Well, you can likely measure the focal length (from lens center to film, assuming ∞ focus). The entrance pupil diameter, being outside of the lens as opposed to a modern camera, is really easy to measure (you actually give the numbers). Your stop numbers will be the focal length divided by the respective entrance pupil diameter (assuming all of the aperture is effective even at the largest stop). The location of the aperture is not perfect so there will be a bit of vignetting, but the math for a single-lens camera is pretty much what you are working with even with modern lenses: all the additional elements are for making the lens better match the single-lens theory.

From my research, I can assume the average film speed of orthochromatic film in the 1920s was between ISO 20 and ISO 30. Panchromatic films, like most modern films, were considerably slower. However, these films were still relatively new back then, so I will assume Kodak made that table for orthochromatic film.

Taking Sunny 16 into account, we could determine the f-stop of No. 1 to be f/16, or a close equivalent. This is because the shutter speed in that case matches the film speed, and because the scene is described to be a brightly lit area, without bright parts such as the sky or snow.

This brings us to No. 2, which in the table says "scenes showing sky". I'm assuming this is one stop down, to possibly correct for the brighter sky.

No. 3 in the table, at 1/25, will correctly expose snow, sea, and other very bright areas. Once again assuming the aperture numbers only differ one stop from each consecutive number, this f-stop would be roughly f/32. With that in mind, No. 4 would be f/48.

This all required some guesswork, so you still don't know for sure the apertures for this lens. I'm especially hesitant seeing as how f/48 would not be usable in most situations with an ISO 25 film, especially given how these cameras were made for the public, who did not regularly lug a tripod about.
Additionally, films had some leeway, meaning films rated ISO 200 may be ISO 400 in today's standards.

My first assumption was that it was the old US system of aperture (US from Uniform System, from Britain around 1880). But the 3 rules that out, as the US system doubled each number, 1,2,4,8,16, etc.

Wikipedia has a chart of old aperture systems at https://en.wikipedia.org/wiki/F-number#Aperture_numbering_systems

and says Kodak used the US system in the 1920s... but the 3 seems to rule that out here. Our modern f/stop system was present at that time too, and was becoming somewhat popular about that time too. Anything later probably was always the f/stop system.

Not the answer you're looking for? Browse other questions tagged aperture vintage kodak or ask your own question.

4
AF-D vs AF-G: is the aperture ring necessary?
1
Why does my DSLR's viewfinder ignore the aperture ring on a legacy lens?
3
What's the difference between real and effective aperture?
2
What does “maximum aperture” mean in a camera spec? Where can I get the full aperture range?
9
Color film comparison: How does Fujifilm Superia compare to Kodak Portra?
1
Choosing an aperture for long-distance landscape photography
2
Got back my film - Nikon FM2 missing shots, blue marks, what happened?
5
(film) What can cause blue vignetting on sub-exposed or dark shots?
5
Compatibility of modern shutter release cable with vintage Kodak No 1