Is it possible to determine from only a photo of a cityscape whether it was taken close with wide angle or from a distance with zoom?

I look after a project digitizing and providing access to vintage photos in our city. Something we've always struggled with is determining from where a photo was taken. We have data on building locations dimensions and are looking at creating a tool to determine this automatically based on tagged buildings in an image. I'm confident we will be able to find a line in 3D space on which the camera must have been. However, I don't know if it's possible to determine a point on that line.

Is this even possible?

Update: I should have mentioned this, but the end goal is to have this be an almost entirely automated process. If it takes building corner or edge level tagging or comparing things in Google Earth then we will not have the human resources to do this.

(PS- in case it helps anyone, the method I think will work to find that line of possible camera positions is to use the centrelines of three known buildings in the photo, load their coordinates from my database, and find (either by solving equations or just iteratively) which bearing causes the ratio of the middle's horizontal span to that of the span of the leftmost's and rightmost's to match that same ratio in the photo, once that is known, the same thing can be done with the vertical span in the photo to find an azimuth.)

(PPS- The very first image I tried this on proved me wrong. Three buildings on a straight street. They are basically all in a line, spaced out by perhaps a kilometer, total). Perspective caused separation ratios in the image that can't be duplicated by rotating the 3D model about the vertical axis. It still might (probably is) possible to solve this, but it won't be as simple as I had hoped.)

You can often use techniques from piloting. You can find alignments in the picture, for instance the corner of a building that masks off the 2nd vertical line of windows of the building in the back. From this you determine a line on which the camera must have been. With two more such alignments you get three lines that give you a triangle in which the camera must have been, and its size gives you a degree of accuracy. Foreground elements can then give you a very precise position. GoogleEarth is your friend.

Somehow unrelated to photography, I was hunting for new housing a couple years ago and the advertisements never give the complete address, but practicing that technique using the views from windows and balcony in the advertisement pictures I was usually able to spot the building.

I am not knowledgeable on the math and programming needed for this, but I can provide you with some insights into information needed for something such.

What you want to look into, is perspective distortion in photography. In particular, you need to research lens compression (which is a bogus term, but that aside).

A quick overview of perspective distortion and compression:
In photography, the focal length of the lens used determines how wide or narrow the shot is. A small focal length means wide angle, and vice versa.
The choice of focal length does not only affect distortion, as beautifully portrayed by the GIF on the wiki page, but also determines compression.

Say, you are at 10 metres distance from Mike. You take a picture of Mike with a 50mm lens, and then move back to 40 metres and take another picture with, this time, a 200mm lens. Mike's beautiful face occupies the same space on the frame, but this time, the background seems to be way closer to him and Mike's face is 'flatter' than in the previous picture. This is what is generally referred to as compression.

Looking at how compressed the images are could possibly help you in determining the distance. This is already tricky though and would probably require a fair amount of guesswork. It does get trickier, however.

If you don't possess the original files or negatives/positives, it's not unlikely the photo you see is cropped.
Cropping further makes it difficult, because cropping affects compression, too. A picture taken with a 50mm lens cropped to half the size would look the same (from the perspective of compression) as when the photo was taken with a 100mm lens instead, from the same distance.

Yes, it is possible. I am sure there will be an approach to doing this in a general way using the geometry of perspective, but here is an example of doing it in a toy example case to show it can be done. Imagine you have something like this: 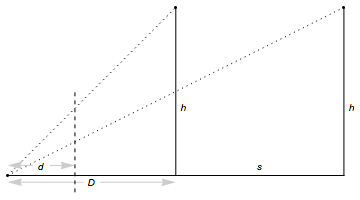 Here the camera is at ground level at the left, and there are two points at an equal height, h, separated by s, with the camera being a distance D from the nearest one, and everything is in a line (let's ignore the problem that the nearest object is going to obscure the more distant one: in real life things will not be in a line like this and the maths will be harder).

You know h and s as you know what is where in the city, and you want to work out D from looking at the photograph: can you? Yes, here's how.

So now we can do a bit of algebra:

So two things have happened here, one will always happen and one is because I chose a toy example.

Finally you can convince yourself that this expression for D is right: if h1 and h2 are the same, then D becomes infinite, and that's right, because you will only see the two towers at the same height if you are infinitely far from them. Similarly if h1/h2 becomes very large then D becomes very small, and this is right: if you're very close to one tower it will appear very big on the image.

Now, as I said, this is a toy example: in real life nothing will be lined up, everything will be different heights &c &c. But if you have enough points on the image for which you know where the real points are then you can tell where the image was made from (interesting question: how many points do you need? I suspect in general it will be 3, although it might be 4: I am sure this is known however).

I am sure that there are books on the maths of perspective, and these will have general solutions you can use: I'd recommend doing some searches on that.

The short answer is yes. It's done everyday.

The subject of Photogrammetry involves answers to your question.

Photogrammetry is measurement from images. Photogrammetry is useful for topographic mapping, architecture, engineering, or even geology! There are a lot of software tools dedicated to aerial photos, photogrammetry is really useful for geographical use. For instance, archeologists are also using it to create plans of complex and remote sites.

Photogrammetry, when I studied it, involved working from aerial photographs and translating pictorial to quantities of water and earth, and distances and directions to maps.

Later, I was able to apply the same techniques on a macro scale to the micro scale when doing research using the electron microscope. Same principles, different scale.

Software exists to apply what you know into what you want to know. A simple search for the term Photogrammetry will give you a precise source for an automated way to check. Some are online.

If the picture has very little perspective, resembling an isometric drawing, it was taken from extremely far away with a telescopic lens. EG: You see two 3-storey buildings, one in front of the other. They are both about the same size in the photo.

If the picture has exaggerated perspective, it was taken from close up with a wide angle lens. EG: You see two 3-storey buildings. The one in front takes up almost the whole height of the photo, the one behind looks tiny.

And, naturally, there is a range of possibilities between these two extremes for any combination of distance and lens you can think of.

Not the answer you're looking for? Browse other questions tagged 3d forensics or ask your own question.