I'm trying to use Manual Mode as much as possible, so I had the not-so-smart idea to use Auto Mode for a sample (first) picture of every set and get similar images after making F number, ISO, exposure and white balance variations. The results have not been what I expected mostly because when I switch to Manual Mode and recreate the settings of a picture taken in Auto Mode the end picture is usually very different.

The pictures at the top of each link were taken on Auto Mode. This is how I remember seeing the world.

The bottom pictures were taken in Manual Mode with more or less the same settings (WB is cloudy since it was an overcast day). I don't recall April/May days being yellow in Canada -only during July and August. The difference is not so dramatic on sunny days between 10h and 15h, but very noticeable when there are clouds.

How can I manually recreate pictures taken on automatic?

Pictures of a bank

Pictures of a clock at an entrance

AWB is not restricted from choosing one of the pre-defined presets - it can and will pick values anywhere along the spectrum, almost always between the presets somewhere. You will rarely find an AWB shot that picked exactly one of the presets.

I suspect it depends on the camera make and model, but recently got rid of my Canon DSLR, so cannot test.

This is only a partial answer, but echoing what xiota said in the comments, what you're doing (learning the camera, playing around with manual modes, manual white balance, trying to understand how the camera makes auto mode selections) is an absolute good thing. Experimentation is great. Now that your first experiments reveal to you that your ability to reproduce expectations isn't what you thought, it's time to get a little more methodical in your testing.

Reproduce your experiment, but add a 3rd test point to each scene. Learn how to set your camera's white balance from a specific reference — an 18% grey card. Now you'll have examples of what the camera automatically selects, what the preset selections produce, and the closest your camera can reproduce to reference gray.

How a camera computes what color temperature and white balance correction to use when set to 'Auto White Balance' is almost as varied as the number of camera models. Although I've never seen an example of such, it would even be theoretically possible for two cameras that are the same model to render different AWB if running different firmware versions and the instructions for computing AWB have changed from one firmware version to the next.

Within the Canon EOS system, selecting different Picture Styles will also use different biases when computing AWB. For instance, the 'Landscape' Picture Style will emphasize blues and greens, while the 'Portrait' Picture style will concentrate on the colors in skin tones. The 'Standard' Picture Style adds a bit of saturation and contrast to give most images some "punch."

As the data processing capacity of cameras has increased over time, the algorithms used to calculate AWB have become more sophisticated and complex. Some cameras also now use RGB+IR light meters instead of the old monochrome or dual layer light meters that couldn't discriminate individual colors. The color information gleaned from metering is used by the camera to try and determine the "type" of scene by matching the characteristics of the scene to a built in reference library of different scenarios.² This more detailed metering information allows better exposure in difficult lighting situations. One of the main things cameras look at when computing AWB are the brightest parts of the image and assuming they are "white." Better metering and exposure can result in better AWB performance. This is because blown highlights can fool many AWB routines and give poor AWB results.

The preset WB settings in your camera use specific color temperature and white balance combinations. AWB can, and often does, use color temperature/WB settings with values anywhere within the camera's range, not just the specific values pre-programmed into the "manual WB" settings such as 'Cloudy', 'Shade', 'Fluorescent', etc.

One vital thing to keep in mind is that AWB operates not only along the Blue ←→ Amber axis that we call color temperature, but it also operates along the Green ←→ Magenta axis that is more or less orthogonal to the Blue ←→ Amber axis. You can have two light sources that both measure at 3700K on the color temperature axis, but one might have a very green cast (such as typical standard fluorescent lighting) while another might have a decidedly magenta cast (such as LED stage lighting popular in small night clubs). If you only set the camera to 3700K, photos under each type of lighting will look very different from one another. To correct for the green or magenta cast you also need to use White Balance Correction. (For a more complete discussion of this, please click on the link to another question here at Photography SE.)

Briefly looking at your examples, the biggest differences I see are: 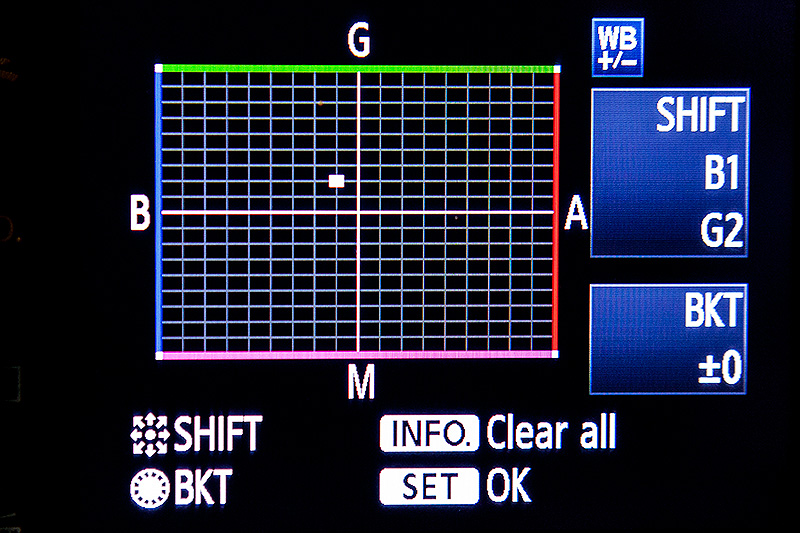 ¹ If you're too young to catch the reference to a well known line in This is Spinal Tap, just ignore it and continue on. Unfortunately, many "HDR" applications enable pushing color saturation far beyond tasteful limits and well past "11" which results in what many refer to as Technicolor Rainbows of Vomit.

² For example, if the camera detects a bright band of mostly blue at the top two-thirds of the frame and a dark band of green at the bottom, it will apply settings optimized for properly exposing the sky in a landscape shot. On the other hand, if the band of blue is only about one-third of the frame and the dark area of green is the lower two-thirds of the frame, it will optimize metering and color for the landscape portion of a landscape shot. The number of different scenarios some cameras have built-in settings for can be rather extensive. In top tier cameras such as the Canon EOS 1D X Mark II and Nikon D5, these extended reference libraries allow the camera to "guess" correctly with almost unbelievable success compared to the older routines in the early days of digital imaging.

Not the answer you're looking for? Browse other questions tagged canon-40d or ask your own question.

20
Why are greycards used for white balance?
15
How could one make a DIY Gray card for exposure/color correction?
24
How do you use a gray card?
37
Does Auto White-Balance Really Work? How?
14
Gray card angle during custom white balance calibration - does it matter?
2
How do I find the right white balance value to set in my camera?
1
Why does temperature in Lightroom go from blue to yellow instead of orange to bright blue?
0
How does Lightroom and PS guess color temperature?

7
Difference in picture sharpness between Canon and Nikon?