What techniques and concepts did Joachim Froese use in this black and white photograph of a moth?

I'm interested in an analysis of a photograph I've chosen by Joachim Froese.

What techniques are used in the creation and the composition of the photo. What ideas and concepts are involved?

According to Froese's website, the shots from this series were not digital but in fact analogue.
These are most likely split prints from one single image. This would mean Froese went in to the darkroom and finally printed his negative or positive on three sheets of light sensitive paper, adding a border in the process by bursting the edge with unfiltered light.

The DOF is very narrow, maybe 2cm tops. For this, he most likely used a macro lens, or seeing the time frame of these shots, used bellows to enable him to get a large 1:1 (or bigger) picture of the subject, which would result in such a narrow DOF. Given how he shot the images on film, it's likely he used a medium or large format camera, as these give a distinctive DOF. My bet is on LF.

The light source appears to come from around the camera's position. The photographer possibly used a softbox to soften the shadows, but I can't tell. Whether he used any other equipment, such as filters, would be hard to tell without knowing the colours of the scene.

Specifically regarding the lighting...

Lighting can most easily be determined by looking at reflections and shadows. Since we don't have any reflections in this shot, we have to look at shadows: 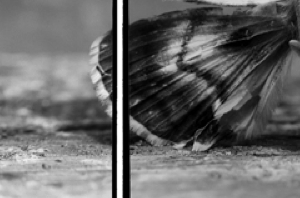 The direction indicates where the light was coming from. In this case, it appears to be from over the photographer's right shoulder and above the camera.

The edge softness let's us know about the light source. This isn't a hard edge, but it is very well defined. Think about your shadow when photographed using the on-camera flash. The edges are harder than a chalk-outline - and you'd do well to avoid both in life. Now, think about your (almost non-existent) shadow on a cloudy, overcast day. This is the spectrum from point light source to diffuse light source.

In this case, the light is slightly diffused, indicating some sort of small light modifier (soft box, octobox, bed-sheet...only the shooter will know but it's important to note the effect on the light).

There is a thin dark shadow that runs more than the width of the moth that would seem to indicate that the above lighting set-up is not the whole story. However, I suspect that this is a thin tube that is being used to suspend the moth like a marionette. The tube is casting its own shadow from the main light based on wherever its position in space is relative to the light.

The lighting of the background is such that the light fades as you travel up. While it's possible to light backgrounds away from subjects (a-la portraits), in this case I think the background was allowed to be lit by the main light and the fall-off was naturally there from bottom to top due to the angle of the main light on the subject.

Regarding the set-up...it looks to be using a photographic muslin laid out on a table and then curved up to create the background. Rocks and dirt were then added to give some extra detail to the image and to break up the texture of the muslin.

I thought death in this photo could have been one, because of the black and white image we are unsure(unless we google) if the creature is alive or dead

Moths don't generally strike a pose like this - it is very unnatural. If the moth isn't dead, it's frozen/refrigerated or something was used to paralyze it (probably within an inch of its life). Personally, I'm against harming animal/bug subjects and generally try to avoid interacting with them at all (look, don't touch).

Regarding the symbolism of the photo..I don't see any symbolism of death in this photo, as you do. There is a very big difference between using a dead bug in an image and creating a symbolic representation of death meant to inspire thought or invoke an emotional response. Simply using the former does not create the latter.

45
What's the best way to get constructive critique of your photographs?
2
How to frame a critique request positively?
8
What went wrong with this concert photo and what could I have done to make it better?
5
What techniques and concepts did Jan Groover use in this photo?
1
Paul Strand- Wall street photo DoF?
0
Man Ray Techniques