How can I detect if two files are actually the same image? [duplicate]

Let's assume a JPG file (or any other image/video file format), that I duplicate the file, and I modify the tags on the copy. Is there a way to verify that the image inside both JPG files is actually the same? I mean, if I do a digest of both files, I will obviously get a different hash. But is there a way to extract from the JPG only the bytes representing the image, so that I can do a digest of these bytes and see that both files are actually the one and same image?

The above is in the context of trying to automate how I manage my photos, i.e. extracting photos from my phone to my pc, detecting duplicates before I back things up, etc. In case it would influence the answers, my home made tools are written in Java, sometimes using external tools like exiftool.

There are two other threads (How can I identify duplicate image files? and Consolidate photos and eliminate duplicates? [duplicate]) that appear to be duplicates, but in my opinion, they're not. Firstly, the second thread is all about Mac and about file naming conventions based on EXIF data. That is most certainly not what my question is about. As for the first thread, it asks for tools that can find duplicates. While a plethora of answers were provided, none of the tools were doing exactly what I wanted (and most were not free) except for the very last answer "Dedup-image" (which incidentally had the lowest score in that thread...). When I dug into the script, I found exactly what I wanted, and this happened to be exactly the answer provided by @Kahovius

In short, the answer from @Kahovius:

All other tools mentioned in the first thread were either not free, or would compare files as blobs (i.e. two files with same image bytes but different EXIF metadata would be seen as different), or would do some heuristics when comparing images (e.g. an image which has red eye removed could be considered duplicate of the original image). None of this is what I wanted.

Here's a quick and dirty solution with exiftool and cmp:

2) Use exiftool to remove metadata:

3) Use cmp to compare the temporary files:

cmp exits with a message if the two files are different; if they're the same, there's no output.

There are different levels of "The same image"

Some programs mentioned in the "Possible duplicate of How can I identify duplicate image files? analyze a fingerprint of an image. I understand that they analyze sort of a low-resolution version of the images and compare them.

This is to compare a small matrix of data to reduce time.

Some of them mark "similar images" for example photos from the same photoshoot.

Some of them actually identify pretty well the same image, even if they are a different resolution for example. They are the same but not really.

Another level of "The same image" can be the same resolution but different compression.

But this would need to examine all the data and compare them.

But if you want to see if they are exactly the same image, as a photographer you can stack one on top of the other and use the difference blending mode. If the image is totally black, this means the image has no difference in pixels.

I guess one way to compare them is to open an image as a binary data or as hexa data. For example, in Irfanview, you can open an image, press F3 and see both formats. 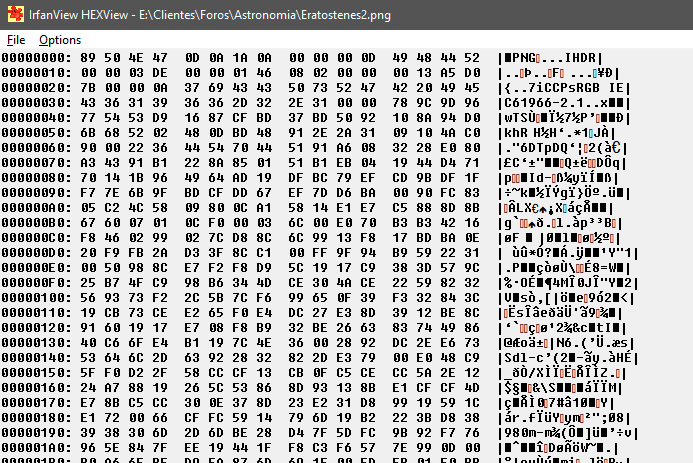 There are some libraries for PHP that let you convert an image to hex code as text, so probably you can use some of that.

If you think the only difference is metadata (which is enough to break comparison of finger prints), you can extract the actual data without decoding it. Be careful that JPEG is really two formats: the old JFIF and the more recent EXIF (which isn't only about metadata), but I doubt that applications will convert from one to another without re-encoding (and thus breaking a comparison).

Not the answer you're looking for? Browse other questions tagged image-processing file-format exiftool automation or ask your own question.

0
How is colour balancing performed in post processing of raw images
9
How can I adjust the colour temperature of an image programmatically?
10
How can I strip tags from a JPEG without removing the color profile?
9
How can I incrementally date photos?
7
Is a JPG guaranteed to produce the same pixels?
1
Writing missing/incorrect Date Tags based on FileName in ExifTool?
1
How to use ExifTool to copy metadata from a group of PNGs to JPGs with the same base filenames?
0
Rename DNG and associated JPG in one go
2
Should I care about duplicates with different metadata?