What kind of equipment and skills are needed to take shots like these?

I would like to be able to take images like the ones below, but am a beginner and don't know much about photography.

I was searching for what kind of camera this photographer used, but I didn’t find it. Even though it says Portra 400 on the border, are these actually film?

If I wanted to take images like these, what equipment would I need and what resources should I look for to begin learning? 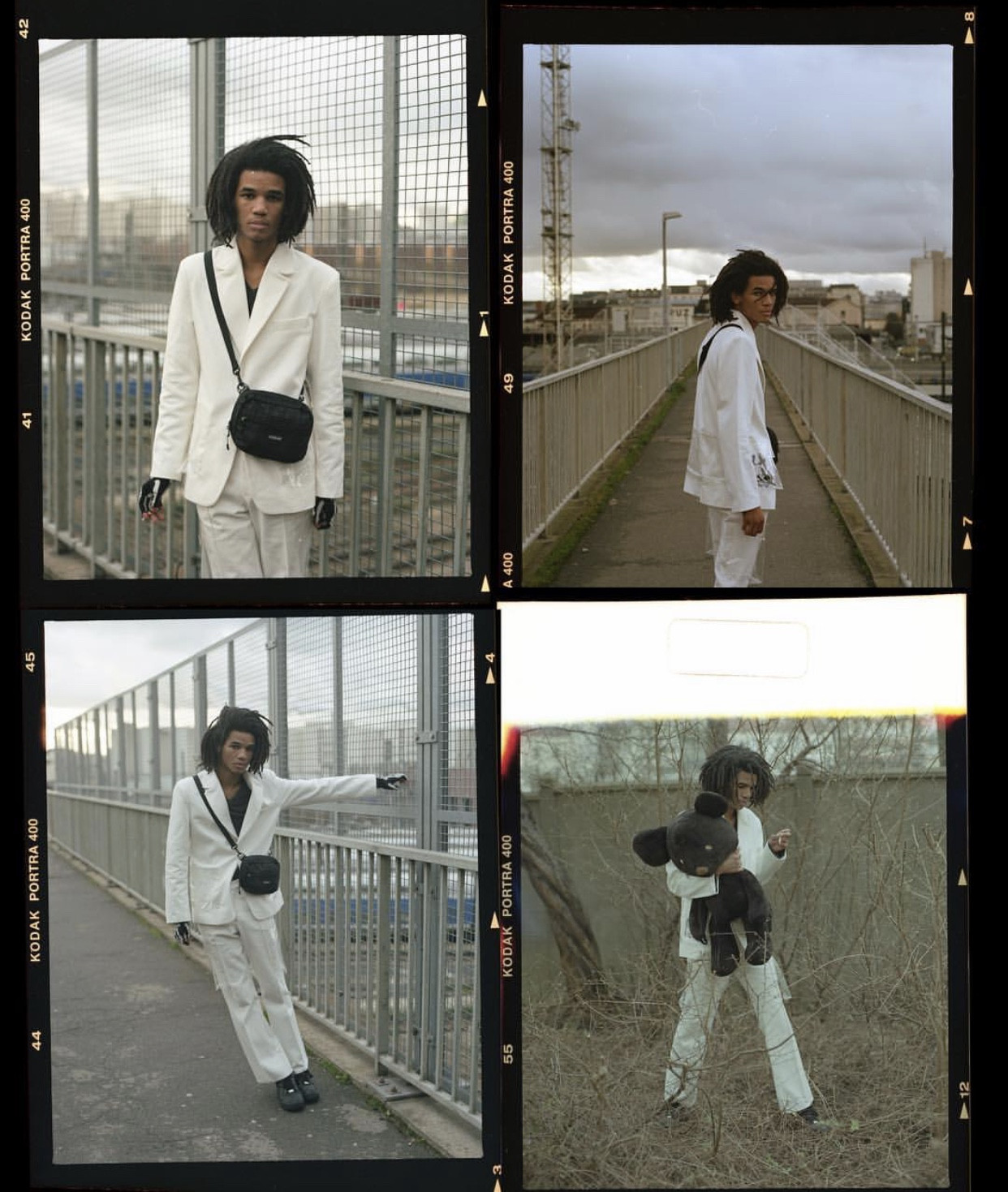 equipment-recommendation film camera
Share
Improve this question
edited May 11 '19 at 15:59

What exactly is it about these images that you "love"? The importance of the camera, lens, and film varies with your objectives. What you want might be doable digitally. Or it may be an artifact of the digitization process.

I'm not photographer & I don’t know the exact terms

You should learn general photography first. As you acquire the vocabulary and knowledge needed to adequately describe what you like about these images, you will likely also gain the skills needed to reproduce them.

I was searching for what kind of camera this photographer used...

Without asking the photographer, it is unlikely the specific camera can be identified. Though, as others have stated, it is possible to identify properties of the camera that was likely used.

Similarly, the photographer would likely have to be asked about the specific lens used. However, someone who is very familiar with the characteristics of a wide range of lenses may be able to identify properties of the lens beyond focal length and max aperture. For instance, the bokeh of some lenses, such as Cooke triplets and Sonnar, are distinctive.

Even though it says Portra 400 on the border, are these actually film?

It's reasonable to expect that these were taken on film because artifacts typical of film are present. However, someone with great attention to detail could replicate them digitally.

Consider getting some Portra 400 film. Throw it in a camera with a decent light meter and lens. No need for medium format, if that's not an essential aspect of what you're after. I'd try something like a Canon T50/T70 with FD 50/1.8 lens in Program mode because they're readily available, inexpensive, easy to use, and produce good results.

Photograph a subject with a limited range of colors on an overcast day. Take the film to a local lab for development. Show them the sample images so they know not to bump the contrast and saturation when making the prints.

The film is 120 and the size is 6x7. There was only a limited range of cameras ever made in this format.

As the shots seem to be hand held & shot from eye level my best guess is they were taken with Pentax 6x7.

The other major 6x7 camera (Mamyia RB) is normally associated with studio / tripod work (it was dubbed the truss strainer as it weights a ton).

The normal focal length for 6x7 format is 105 mm and the images seem consistent with a normal lens. So my guesstimate is Takumar 105/2.4, which is a sweet lens.

I don’t know if it’s with camera film

Well, in an era of special effects these images can be faked, you could compose an image and add some elements of old photos, the frame, the tones, the noise.

An investigation includes the date of the images. For example, Are the buildings of a known city with a clear skyline that is now transformed? Are the images from a known actor of the 80s? of the 70s? Then, there is a chance to find out which model of cameras was commonly used.

More importantly, this would exclude (mostly) the usage of a digital camera and confirm the photo was made by a film camera.

Can you find the name and the biography of the photographer? This will probably give you the best answer, you probably can even contact him.

But in the end, it does not matter to be that specific. Let us assume it is really a contact sheet from a film camera.

For next time i can deduce from myself

The answer, in general, is "study".

For example. First of all, it is a medium format film camera.

Which is a subset of the more general history of photography.

But you are losing yourself. You are not the police solving a cold case.

What you need to focus on is on what do you like, the surrounding, the clothing... But My guess is that it is more about the posing, the mood, the nostalgic feeling.

Yes, there are a couple of specific technical aspects you do should focus on.

Lenses, focal length and aperture. Google that, search on the forum.

And probably some color grading on postproduction.

But again, focus on the mood, on the posing, on the relationship with the subject. Focus on that, forget "the camera". (Well, do not forget to actually bring the camera)

Though it is possible to add negative borders to digital images, I'm going to assume that these are scans of film and that you are wanting to get into film photography...

The image ratio on these appears to be 6x7, which is the largest "normal" size for medium format cameras using 120 size film. (There are panoramic cameras that use 120 to shoot some very wide shots)

Example cameras that shoot the 6x7 format are the Mamiya RB67, Pentax 67, and Fujifilm GF670. This list is by no means exhaustive.

Additionally, other medium format cameras use the same film but shoot other ratios, such as 6x6 and 6x4.5. Since they all use the same role of film, the number of frames you'll get per roll is highest with 6x4.5 and smallest with 6x7.

Example 6x6 cameras include the Hasselblad 500 and Rolleiflex.

Keep in mind that, because of the size of the negative is bigger, the whole camera system is bigger than perhaps anything you're used to. If this is a deterrent, but you still want to shoot film, then look for any of the plethora of 35mm (135 film) SLR's or rangefinders on the market.

I don't believe any of these are made new anymore, but they come cheap on the used market. Keep in mind that you'll also need lenses - which matter far more for the shot than the camera. A 75mm or 90mm lens is good to get you started, and once you have some experience, you can decide if you need a wider or more telephoto lens.

The worst thing you can do in photography is screw up your exposure (well, maybe not the worst but it's up there). These images were all taken on a cloudy day and the exposures look good, with the exception of the blown sky in the last. No additional lights/flashes appear to be in use.

So, you can easily take images like these, assuming you have the camera, some Portra 400, a cloudy day, and a model.

Since exposure is so critical, and since many of these older cameras don't have any automatic functions whatsoever, you need to begin your journey by learning about exposure.

You can then further learn about composition, depth of field, angle of view, light modifiers and mixed lighting and strobe only lighting. If you want to begin shooting black and white film, you should also learn to develop it at home. There are even more topics than these, but even just exposure and composition are enough to get you started and continue learning for a bit.

Not the answer you're looking for? Browse other questions tagged equipment-recommendation film camera or ask your own question.

155
What is the “exposure triangle”?
7
With which film camera should I start?

4
Should I upgrade my D40 to a D5100, D90, or D7000?
5
What equipment do I need to film downwards over a table?
1
You have two rooms to build your photography skills, measuring about 12 x 12 feet and 9 x 8.8 feet. What lens/lenses would you buy and why?
2
What are the differences between current films available for the Polaroid SX-70 Land camera?
1
Nikon F3 vs Contax T2 for a beginner film user?
6
What features should I (as a beginner) look for in cameras to photograph esp. cities, landscapes, and night shots?
3
Why are my photographs on Kodak Portra 400 coming out hazy and gray? Am I getting the exposure wrong?
0
What kind of ports are these?
3
Are there digital (industrial) cameras with open API's (software interfaces) with Ethernet communication?