How commonly do constant-aperture manual zooms actually influence the aperture mechanically when zooming?

I have seen a few examples of constant aperture zooms (eg a 28-100mm f/4 Ricoh.) in the secondhand markets where the aperture appears to be not fully open (visibly non-round hole) at some zoom settings. Did some designs actually do that intentionally to enforce the constant aperture, or are these just cases of mechanical defects where unrelated mechanical parts interfere with each other due to friction or bad justage?

I am not sure about other manufacturers, but Canon uses a "secondary diaphragm" in some of their constant aperture wide and standard zooms.

Here is a lens grouping Block Diagram depicting the secondary diaphragm in front of the primary diaphragm. 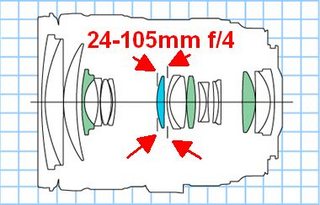 Here is a video that shows it in operation as you zoom the lens: EF 24-105mm f/4 Secondary Diaphragm 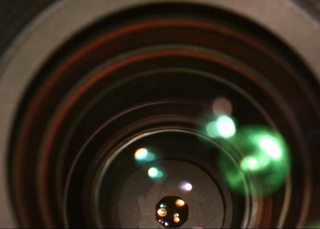 According to the block diagrams published by Canon, the EF 17-40mm f/4 L and EF 24-70mm f/2.8 L do have a secondary aperture, but when examining the movement of the unmounted lens as the zoom ring is turned their action is far less noticeable than that of the EF 24-105mm f/4 L IS.

Perusing block diagrams at the Canon Camera Museum, it seems that telephoto zooms don't have a secondary aperture while upper tier constant aperture wide to normal zooms (those that use a retrofocus design) usually do.

EF Zoom lenses with published block diagrams that do not show a secondary aperture:

EF Zoom lenses that do show a secondary aperture:

Looking at these lists, we can see some tendencies:

In summary, the thing Canon lenses with secondary apertures have in common is they are retrofocus designs incorporated into zoom lenses well above entry level (with the noted exception of one lens design that was offered in USM/non-USM versions).

EF zoom lenses that do not show any aperture positions in the published block diagram:

As you know, when the camera shutter clicks, light plays for a time on the surface of film or the digital sensor. This action establishes the exposure. We can regulate the volume of the exposing light energy in several ways -- topmost is the aperture adjustment. We are talking about how we set the working diameter of the lens. It is the surface area of the aperture entrance that controls the amount of light that the lens will pass. However the strength of the exposure is also delimited by focal length. You need to know that changing the focal length as we zoom has an enormous influence over exposure. A twofold change, say from 25mm to 50mm in focal length, results in a 4X (2 f-stop) change to the exposing energy.

This zooming in changes the magnification 2X and this induces a 4X change in the area of the projected image. In other words, a 2X change in focal length results in a magnified image that covers more surface, so the light intensity at any given point is reduced by a factor of 4 (2 f-stops reduction). Conversely, zooming out (shorter focal lengths) results in an upsurge of the exposing energy.

Thus both the working diameter of aperture and the focal length intertwine to influence the amount of exposing light energy. This would result in chaos if it weren’t for the f-number system. We divide the focal length by the working diameter and calculate an f-number. This is a value used to express the relative amount of light passed by a lens. The f-number system is a ratio that is universal. If various lenses are set to the same f-number, they will all will pass the same amount of exposing light energy.

From you question, I deduce that you think the zoom lens maintains a constant exposure with the zoom by changing the working diameter of the aperture. And you are correct, but there is no mechanical linkage that does this trick. The zoom lens uses a clever regulating method. The front group of lenses, those ahead of the iris opening, magnifies the apparent size of the aperture opening. As you zoom, the spacing between these lens elements and the iris is altered. In other words, as you zoom, the apparent diameter of the iris changes with the zoom. This is the stuff of constant aperture.

This works because the outside world sees a working diameter that varies in proportion to the zoom. If this optical trick works out, the exposing light energy remains constant throughout the zoom.

All that being said, what you are seeing could well be old lenses with mechanical failure. The iris blades (leaves) are thin and thus fragile. Failure of the iris leaves is common especially due to age as they are lubricated. Often this oil evaporates or clumps and a malfunction results.

Not the answer you're looking for? Browse other questions tagged lens zoom lens-design or ask your own question.

10
What useful information can one gain from a lens element diagram?

27
How does the lens diameter influence photo quality?
45
How do constant aperture zoom lenses work?
8
Does the imaging circle size change when a lens zooms?
1
What are the pros and cons of constant-aperture zoom lenses, for a relative beginner?
14
How do zoom lenses restrict their widest aperture at the telephoto end?
2
How does a manual lens know when to adjust the aperture?