shutter-speed image-stabilization
Share
Improve this question
edited May 2, 2019 at 22:55

IS has no effect on subject movements. None. Zero. Nada.

If your subject is moving, only a shorter exposure time ("faster shutter speed") will reduce the amount of blur caused by the subject's movement.

Some related questions here at Photography SE for further reading:
What is more important, f-stop or IS
What reduces blur from camera movement more: large aperture or image stabilisation?
Is Canon 24-70 f/2.8L II that much better than Canon 24-70 f/4L IS?

Is there a stage at which there is a lag with the image stabilisation system that is overcome by shutter speed? There must be a time element within any IS system that impacts the image detrimentally as in rapid high speed shooting (7 or 10 fps) where the IS cannot keep up with the repeated shutter speed of 1/1000 sec?

IS in lenses such as the EF 600mm f/4L IS II keeps up just fine at 14 fps when used with the EOS 1D X Mark II. It's just that as the exposure time is reduced, the amount of blur caused by camera movement at the same rate of change is reduced by the shorter exposure time.

To understand just how little of the total time per frame is spent with the shutter actually open (partially at any given point with Tv shorter than flash sync speed), check out this video from which the above GIF is extracted. It's cued to a point right before the shutter button is fully pressed. Waiting for the mirror up confirmation seems to take forever. It's much longer than the actual exposure!

The difference you are seeing between using a Tv of 1/1000 and using a Tv of 1/2000 is that the birds are only moving half as much in the 1/2000 second their image is projected onto a particular spot on the sensor as they are in 1/1000 second. It has nothing to do with IS.

In terms of lens alignment, IS always has the potential to be detrimental - even at slower shutter times. With lens based IS, the movements of the IS element/group introduce mild misalignment of the lens. This is viewed as acceptable if the blur introduced by the less than 'perfect' optical alignment of the lens¹ induced by an IS movement is less than the blur that would otherwise be introduced by the motion of the lens/camera. Eventually, as exposure time is shortened, one does reach a point where the penalty of slight lens misalignment outweighs the benefit of compensating for blur caused by camera motion. That does not, however, explain your observations with regard to birds in flight.

As with almost everything photography related, there isn't any "free lunch." For how both IBIS and lens based IS can affect image quality, please see this answer to Does IBIS reduce image resolution? How does it compare to lens based IS?

¹ There's no such thing as a 'perfectly' aligned compound lens, even among non-IS prime lenses. There are always manufacturing tolerances to be considered.

John, I think you are missing the point of using IS. IS essentially works to eliminate the camera shake while taking the photo. However, in your case, you need a higher shutter speed to freeze the moment. So, the higher the shutter speed, the crisper and clearer would the image be of a flying bird.

I've wondered the same thing and from my research came to the conclusion that, "Yes there is a point at which Image stabilization is detrimental"

The Problems With Image Stabilization

Image stabilization can also have some weird effects if you use it in the wrong situations. Once your shutter speed is above around 1/500th of a second, image stabilization won’t really improve your images. Your muscles don’t twitch 500 times a second! Instead, it can actually have a detrimental effect on the sharpness of the image because of the moving elements in the lens. Although it’s mainly anecdotal, most professional photographers turn image stabilization off unless they absolutely need it for this reason.

I had read somewhere, but can't find the reference now, that image stabilization samples and adjusts the optics at around a thousand times per second. Most shutter curtains transit the sensor at around 1/250 of a second (even if you're shooting faster).

Based upon that, shooting below 1/250 would integrate stabilization shifts over the entire sensor image. Shooting faster than the curtain speed results in a moving slit that could have IS/VR shifts on only parts of the image, perhaps multiple times.

The net result is I don't know for sure and it's still a subject of discussion.

I just found this: 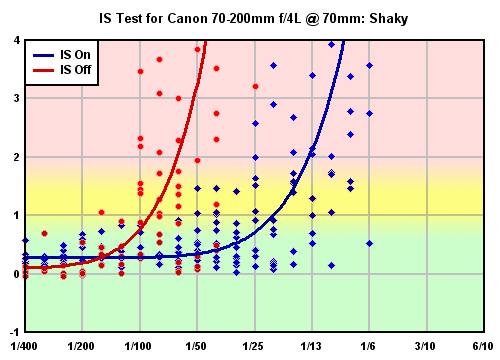 Their testing is primarily aimed at blur improvement over slower shutter speeds, but note the lower left where the shutter speed exceeds twice the focal length. Non-stabilized becomes better.

The difficulty in testing is that it's highly subject to the person holding the camera. Tripods are not an option.

Not the answer you're looking for? Browse other questions tagged shutter-speed image-stabilization or ask your own question.

8
Does IBIS reduce image resolution? How does it compare to lens based IS?
6
What reduces blur from camera movement more: large aperture or image stabilisation?
1
What is more important, f-stop or IS
0
Is Canon 24-70 f/2.8L II that much better than Canon 24-70 f/4L IS?

10
How important is ISO speed?
13
How useful is image stabilisation below 200mm, really?
0
Why does my bridge camera underexpose in Tv mode at 1/1000s?
5
Why isn't my Nikon D3400 freezing motion even with the shutter set to ¹⁄₄₀₀₀th of a second in View Finder Mode?
2
Is my Tamron lens VC (image stabilisation) working properly for long exposure photos taken with a tripod?
2
How do I compensate for lack of minimum shutter speed when in Av mode with the Canon 750D (Rebel T6i)?
0
Which image stabilization mode do I use for moving subjects?
1
Shutter sync issue with Godox X2T-N and Nikon D5100
1
Panasonic FZ1000: Flash FP high-speed sync oddities, 1/16000s mechanical shutter?
2
Slow shutter speed and image sharpness