How can take a better picture of this creek under bright sun light and dense vegetation on banks? 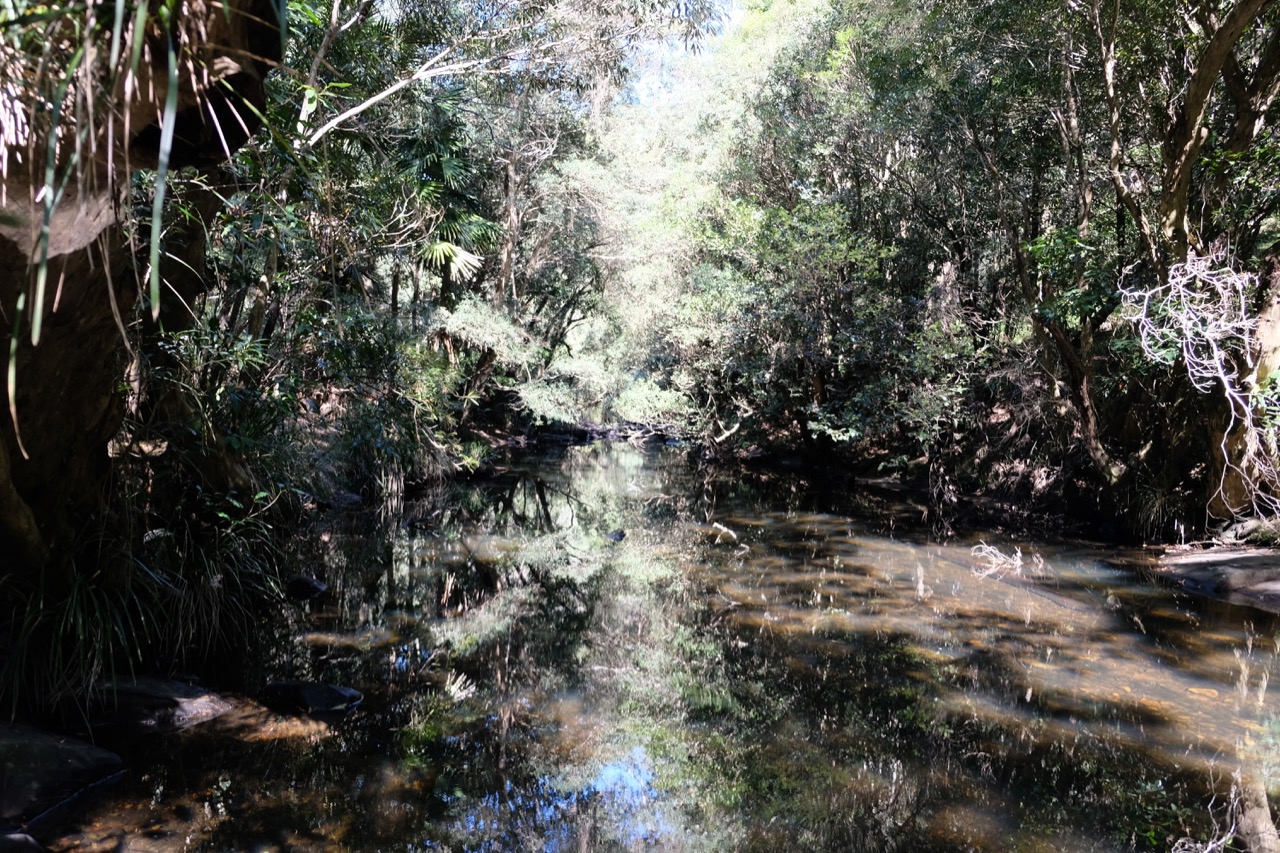 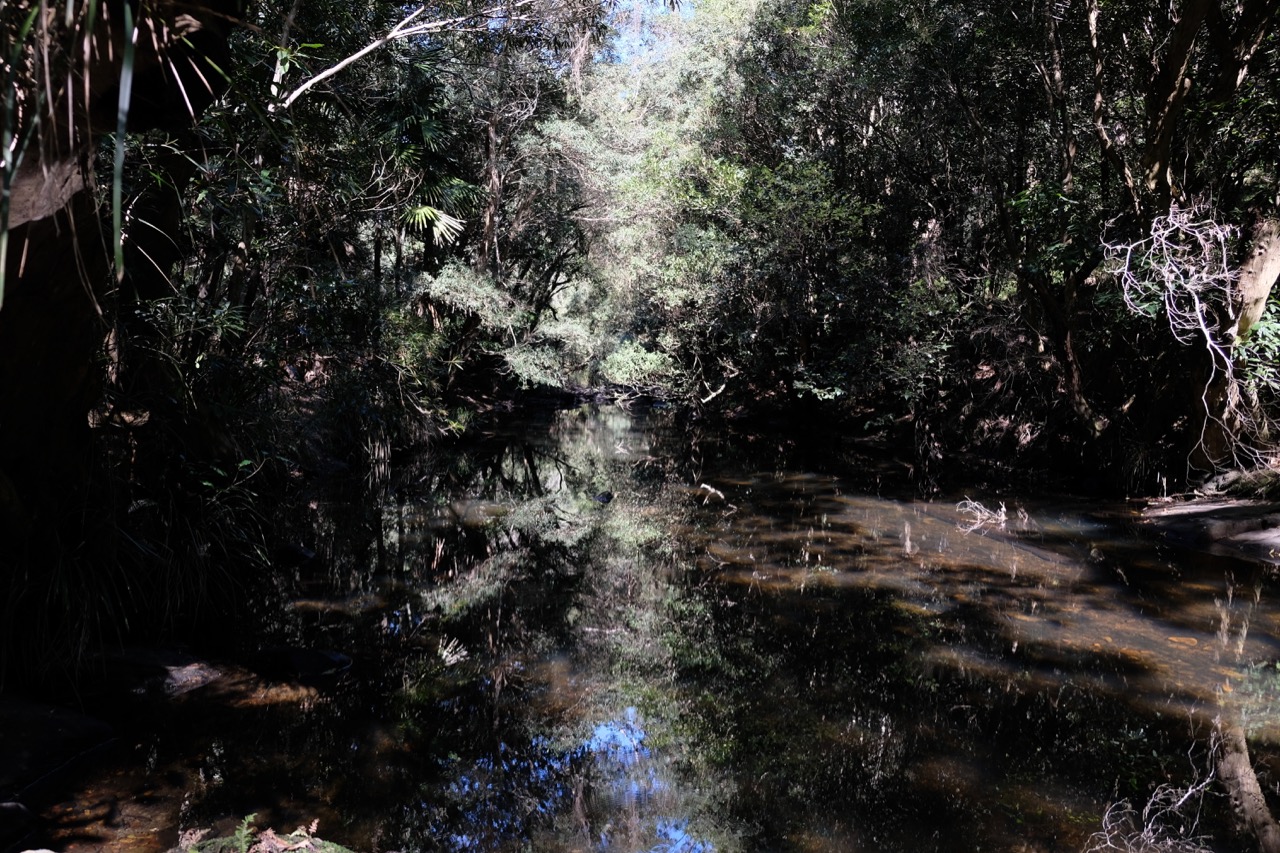 I think there are several problems with them:

1) It is nothing like what I saw with my eyes: The water is like mirror in the photo and hence it is very hard to make out where the river boundary ends and the river bank starts.

2) The sun came down from the top and create a very high contrast. If I lowered the ev (as in 2nd picture), then the area around the river became too dark.

I don't think bracketing will help in this situation because trees and water flow always change slightly between frames.

I think the first problem is caused by the polarised filter on my len.

In general, what are the good techniques to improve these photo?

There is only so much you can do in the middle of the day when the sun is so bright and the shadows so deep.

Go back just before sunrise and watch the place as the sun comes up, return just before twilight and watch as the lighting changes as the sun sets. You may need to visit it several times as atmospheric conditions can be vastly different form day to day.

Also you may need visit at different times of the year as the direction of the sun may be better in different seasons.

Try to learn how cameras see and record light, they are not nearly as good as your brain so you need to understand that and compensate with Manual adjustments to the settings of the camera.

I can imagine this place with rays of golden sun light piercing the canopy of the trees and tuning it into a magical looking forest glen.

Note that polarisation occurs mostly at certain angles but a typical water surface is a good candidate. A polariser does not help against reflections from a flash (unless you put a polarising filter on the flash itself) since the problematic reflection direction is not causing polarisation.

Apropos flash: with contrasts such as the one shown here, a fillin flash at a decent level (-2EV or so) may do a lot of good for shadow detail without spoiling the character of the scene.

You can also do "exposure bracketing", creating 3 photographs at different exposure and then combining them to a "high dynamic range" image. Your camera may offer some help with that kind of job or even the complete job (typically at the cost of not producing a RAW image). Personally, I prefer getting the lighting such that I can make do with a single shot.

Shadow detail by fill-in is one instance where an on-camera flash close to the axis (built-in or even ring flash) makes sense: the usual problem of a lack of perspective since you don't see the shadows is exactly what you want for fill-in flashes in order not to get shadows competing with those of the main lighting.

Check these contrast filters, personally never used them, so don't have any first hand experience:

"Controlling contrast is difficult in bright sunlit exteriors. Exposing for either highlights or shadows will leave the other severely under-or over-exposed. Tiffen was recognized with a Technical Achievement Award from the Academy of Motion Picture Arts & Sciences for the innovative design of this popular Motion Picture and TV filter. It uses the surrounding ambient light, not just light in the image area, to evenly lighten shadows throughout. Use it where contrast control is needed without any other effect on sharpness or highlight flare being apparent."

Not the answer you're looking for? Browse other questions tagged exposure-compensation reflection contrast fujifilm-x-t20 or ask your own question.

49
How can I take pictures through a skyscraper, airplane, or train window?
21
How can I get better results photographing dry erase boards?
5
How can I make the text in this photograph of an ancient column more readable?
7
Why do my prints darken too quickly in the developer tray?
3
How can I improve the contrast between the water and bushes in this photo?
3
Light meter battery ran low and I overexposed my ASA 400 HP5+. How much should I push my film?
3
How could I have capture better the lighting for this photo