I want to know the exact UTC time of the moment of the shutter button pushed. A precision of milliseconds order would be ideal, but anything better than 1sec is acceptable.

The photo properties detail doesn't have enough accuracy. The time reported is in minutes of UTC at best.

Also, is there any lag between clicking the shutter button and opening of the shutter? Yes obviously, but how much? and does it depend on the exposure time and anything else?

I'm shooting satellite passes in the night sky, with a final goal of orbit determination. So, precision matters a lot!

With the Canon cameras I have used, the EXIF info includes several fields labeled 'Subsec Time', 'Subsec TimeOriginal', and 'Subsec TimeDigitized'. These fields do not appear to be in the Maker notes section. They are not displayed by most EXIF viewers. There are a significant number of EXIF fields that are there but not displayed by many or most viewers.

When viewing .cr2 files using Irfanview, the three 'Subsec Time' fields are displayed with all three having the same value. The field is populated with a value from between "00" to "99". 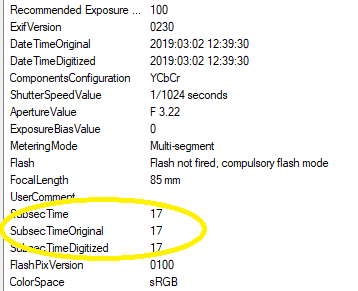 Bursts taken at several frames per second indicate that the "Subsecond" value recorded is in units of 1/100 seconds. For instance, when the camera is set to shoot at 6 fps, the "Subsec Time" offset between each frame in a burst is usually 16 or 17. One-sixth of a second is 166.667 milliseconds. Combined with the standard "Date Time" tag, this will indicate the time the image was recorded to a precision of 10 milliseconds.

Of course this is all expressed in the camera's clock time.

If the camera has built-in or add-on GPS capability, you should be able to sync the camera's clock to the GPS signal. Be sure to compensate for the current offset between GPS and UTC. It varies over time. That's as practically accurate as you're likely to be able to do unless you use your own properly synced atomic clock (not just a clock that receives radio signals from an atomic clock, but rather an actual atomic clock).

If the camera does not have internal or external GPS capability, you would need to perform a sync with a time server to sync the camera's clock as closely as possible to UTC. I use EOS Utility with the camera connected to an internet connected PC. This gets very close. Immediately before taking your images, you could measure the difference between your camera and an active GPS device By taking a photo of the GPS device. This should get you to within at least 1/10 second if the GPS device displays in increments that small. You would then get the offset when comparing the time stamp (including the "Subsecond" fields) in the EXIF Info with the time indicated by the photo of the GPS device.

¹ When single images are taken, there do seem to be an inordinate number of images with 'Subsec Time' values of "00" with certain camera models (7D, 5D3) while other models (5D2, 7D2) seem to not do this. When more than one image is taken within the same second, or sometimes even within a few seconds of one another, the 'Subsec Time' values are more evenly distributed for all of the camera models. This may be an issue with the way Irfanview is reading the info. The cameras that do not show an inordinate number of '00' entries also show the correct 'Sequence mode' ('Drive mode' in Canon parlance) as 'Continuous'. For the camera models with a high number "00" entries, Irfanview shows 'Single or Timer' as the 'Sequence mode' even when set to 'Continuous' drive mode. YMMV

This question has sort of already been asked.

A different solution is to trigger the picture from another device (good use for a Raspberry Pi or equivalent), that both triggers the camera and records the accurate time.

Place a precise and accurate clock in the field of view of the camera.

Your question got me to wondering, so:

There is an official Nikon product GPS Unit GP-1 and 1A that plugs into many (not all) Nikons to provide GPS metadata, GP-1. There are also several 3rd party makers such as di-GPS.

I was unable to find specifications stating the precision that was recorded but this image back display only shows seconds.

@ths's suggestion to put a clock in the field of view made me wonder about your shutter speed. Any clock precison, GPS or physical, is going to be blurred (logically or visually) over your exposure time, so now you would need to know whether your precision time is at the beginning, end, or somewhere else in your shutter exposure.

It's an interesting project and I'd like to hear how it develops.

Not the answer you're looking for? Browse other questions tagged dslr astrophotography night-photography time or ask your own question.

5
Does the EXIF data “DateTimeOriginal” get recorded at the start or end of the exposure?

43
How to shift EXIF date/time created by time in days, hours, minutes?
5
How much more would a DSLR cost with no time limit on video recording?
2
Any ideas on how to capture time?
5
Methods for dithering a DSLR
6
How do I get a shot of both the foreground and stars with astrophotography?
1
Why my dslr takes more time to process pictures shot at high apertures?
5
How long should I charge a DSLR battery for the first time for best results?
1
How to calculate very long exposure times?
3
How would one get a moon shot like this?
4
How to improve my milky way shot?