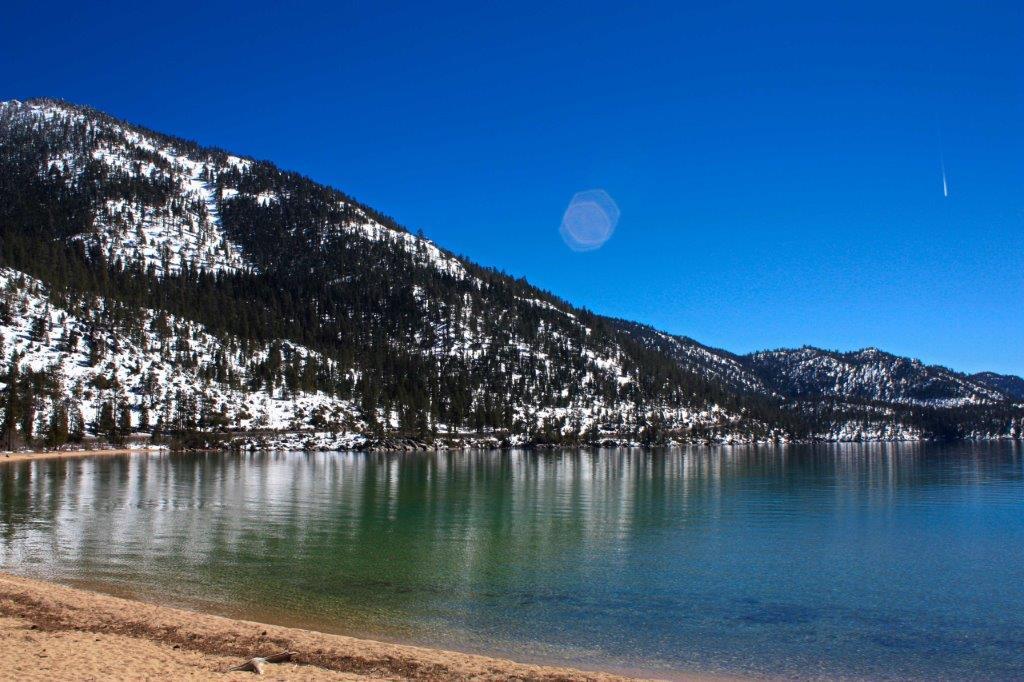 What is causing the white shape in the picture and the white streak on the right hand side of the picture. I think that it has something to do with the lens because when I zoom in the the white image in the center appears larger in the picture. And what do i need to do to prevent these two things from appearing in future pictures. Thanks in advance for any help

The white streak on the right edge appears to be the contrails from a jet airplane flying in the lower edges of the stratosphere.

The hexagonal dots in the middle of the picture are called lens flare. They're caused by a bright light source not far outside the frame. In this case, judging from the shadow cast by the rock on the beach, the sun is just to the right and above the edge of the field of view. Even though the sun is not in the picture, some of its light is shining at an angle onto the front of the lens. That light is bouncing around inside the lens causing lensing flare. The hexagonal shape is a result of your lens' aperture diaphragm, which has six blades.

The best way to deal with flare caused by strong light sources out of frame is to use a lens hood. If your lens is a zoom lens, though, the hood only provides optimal shading at the widest focal length. As you zoom in, you may need to shade the lens from the sun using a piece of cardboard or other opaque material.

The hexagonal shape in the center is your lens diaphragm, or aperture. It becomes apparent with bright light directly entering the lens. Change you view angle (not really practical for landscape shots), or block direct sunlight from striking your lens with a hood or even a hand (yours or someone else's) shadowing your lens.

The white streak looks like a jet contrail to me.

4
Overexposed shots on a sunny day with Auto settings?
3
What is the problem if sun is behind me? What does that signify? Where should the sun be when I take photos?
4
Visible sun beams - what are the conditions for them to appear?
0
What is the origin of the hexagonal artifact of direct sunlight/spotlight photos?
4
What is the best way to preserve chlorophyll anthotypes?
1
Images taken in sunset at 7pm (with back toward the sun) make skin appear orange
4
Is knowing the Sun color temperature enough to get the right white balance?
1
What to look out for when shooting in direct sunlight, causing hard shadows and shiny patches on water?