Can the slant edge SFR method measure lens resolution greater than the Nyquist limit for the camera sensor?

The slant edge SFR method has become the standard for measuring resolution of lenses and camera systems. It works by scanning a five degree slanted edge to calculate a line spread function. This is differentiated to produce an edge spread function which is in turn passed through a fast Fourier transform to produce an MTF curve (rough description).
EDIT - for the purpose of this question assume there is no anti-aliasing filter since that is a limit independent of the Nyquist Limit.

This article by Peter Burns (the originator) better describes the method.

The measurements would seem to be limited by the Nyquist Limit of the sensor in the camera. See this discussion. But, because the edge is slanted by five degrees it is, in effect, being by super-sampled during the scan.

So my question: does this super-sampling of a five degree edge allow us to measure lens resolution beyond the Nyquist Limit of the camera sensor? 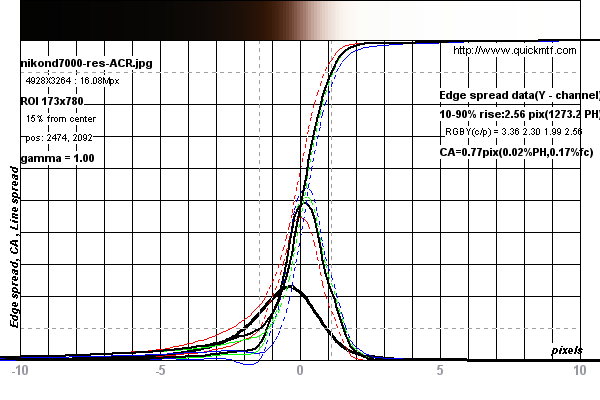 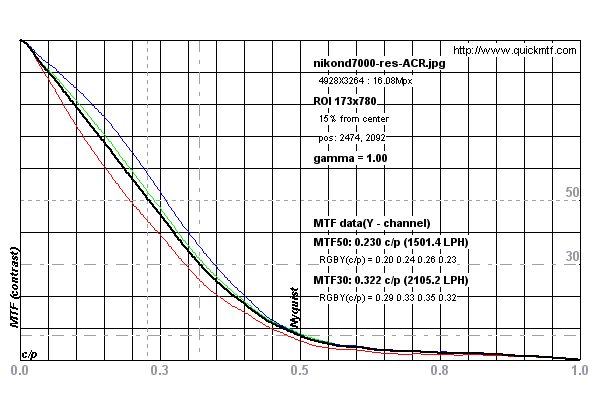 Measurements were made on this test image for the Nikon D7000 from DPReview.com.

This reply expands on the discussion in the comments.

The averaging idea turns out to be the right one, as ably explained by Douglas Kerr in a nice little online paper. The basic ideas are two:

In this way, the slanted-edge method can detect frequencies in the MTF that exceed the limiting frequency of a single image. It works due to the simplicity and regularity of the test pattern.

I have left out many details, such as checking that the line really is straight (and adjusting for slight deviations from linearity). Kerr's article is accessible--there's almost no math there--and well illustrated, so check it out if you would like to know more.

Not the answer you're looking for? Browse other questions tagged lens sensor resolution or ask your own question.

19
What is the Nyquist Limit and what is its significance to photographers?

18
Why are effective pixels greater than the actual resolution?
2
Is the BxU measure of lens resolution still used by anyone?
17
How can a high resolution camera matter when the output is low resolution?
1
is a camera sensor size cropped according to the change in pixel aspect ratio of a resolution?
5
Is the camera sensor or the lens the limit to resolution?
1
What is it called when a camera generates files with more megapixels than the actual sensor provides?
3
Can I use my camera to measure lens light transmission?
7
Can using a high resolution sensor and downsampling compensate for a soft lens?
1
Can I upgrade the resolution of a camera without getting a new camera body?