I know that the Nikon D850 has a square format mode both in live view and viewfinder, but I'm looking to do the same (or something similar) in my Nikon D750 (which doesn't have these capabilities).

Or maybe some hack that would allow me to either see a square image, or at least the square lines in the live view?

Maybe some protector covering the live view with a square?

I have found nothing on this topic on the internet and upgrading is not an option.

If you need to see a preview of the image in square format to aid in composition using the rear LCD, the easiest thing to do is what you suggest near the end of the question: mask the rear LCD screen into a square, taking care to make the width of the mask equal to the image height of preview images displayed on the LCD, rather than the height if the LCD screen itself.

For the viewfinder, selecting 'On' as the option under custom setting 'd7:Viewfinder Grid Display' enables a set of grid line overlays to be displayed. The two vertical lines on either side of the frame appear to be about 5% taller than the width between each one. This is as measured from a drawing of the viewfinder on page 10 of the Nikon D750 User Manual

I've added yellow lines to show where an actual square crop centered on the exact middle of the frame would be: 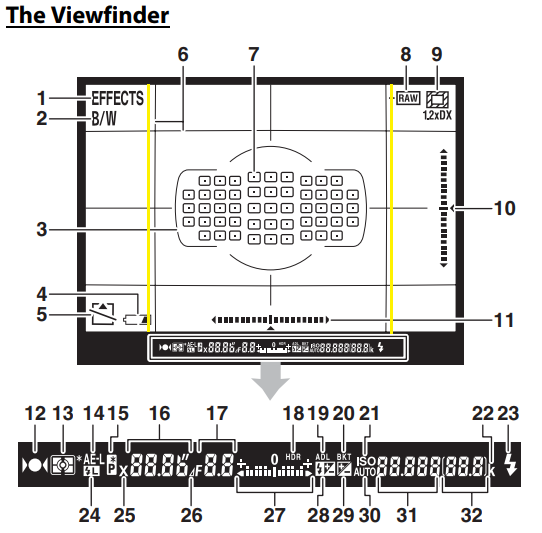 That's going to get you very close, though you would need to crop the image manually later on.

Nope. If you could manage to load it, it would most likely brick the camera permanently. Even if it didn't permanently damage the camera, it would not work correctly. Different sensor pixel dimensions would scramble the photos. Other hardware differences, both internal and external, would make most things things non-functional.

The easy practical obvious way is to simply take the picture, making sure it includes all you want to see, and then later crop the image to the desired image shape. It's an easy skill everyone needs to know, because we generally always must do that exact same thing to match the paper shape for printing. You can see what you're doing then. The D850 has more than plenty of pixels to do this.

If you have no tools yet, maybe there are better choices, but just to mention something in the Free category, IrfanView is a free viewer/edit program that can crop to paper aspect ratio. Irfanview is an excellent and handy image viewer program (to browse folders full of images), maybe not actually with great capability for photo edits, however it has adequate crop and resample tools, very sufficient for printing.

Its menu Edit - Create Custom Crop Select will crop an image to match print paper or other desired aspect ratio. Specify the desired aspect ratio (1:1 for square) and then draw that crop box. It's easy if you read the instructions in this tools box. Click the desired aspect ratio and Save it with the button. That draws a crop box on the image, but which is not finalized yet. Then you can move it with the Right mouse button. You can resize that marked box still keeping the same ratio by dragging a border using Left mouse while holding the CTRL button (CTRL button keeps the initial aspect ratio shape). Repeat as necessary, make it look any way you want it, and then click Edit - Crop Selection, and then save the image to a file.

Not the answer you're looking for? Browse other questions tagged nikon live-view firmware or ask your own question.