What kind of equipment or other technology is necessary to photograph “sprites” (the atmospheric phenomenon)?

Multiple column sprites line up above an angel sprite in my last sprite lightning capture from the night of 4/17/2019 . An uncropped image on the 50mm about 20 minutes before being clouded over. Anadarko, Oklahoma. 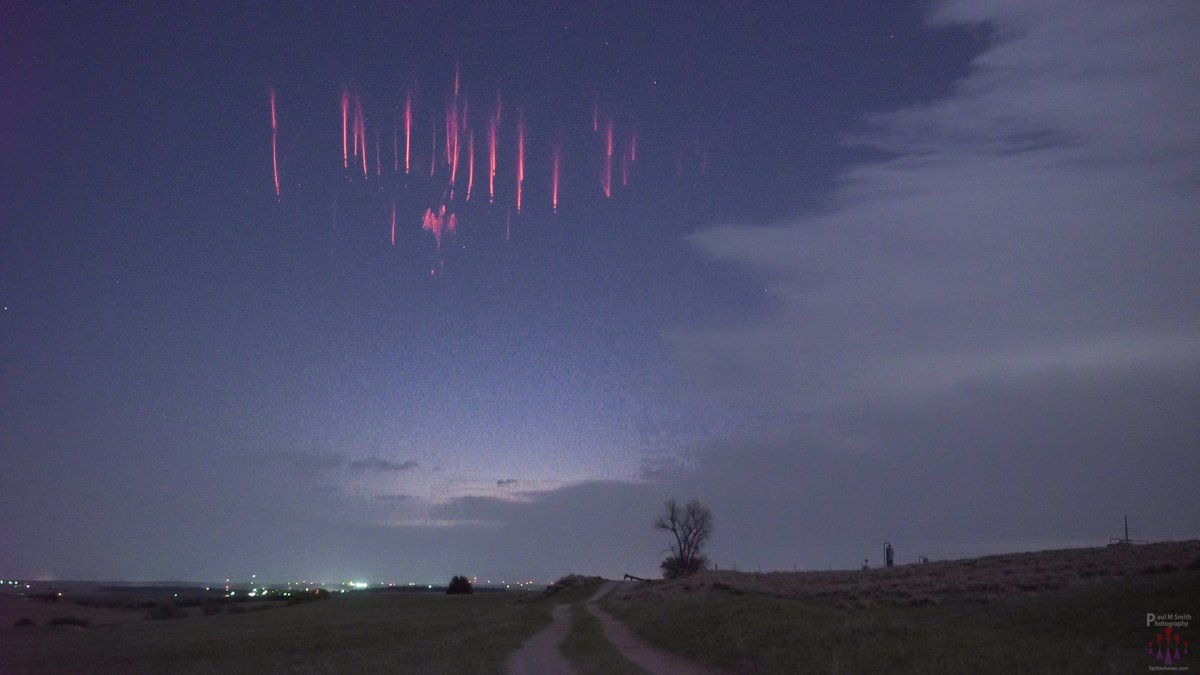 The photographer Paul Smith also has a website: https://www.spritechaser.com/

Question: I'm wondering if the challenge is only in knowing where and when to point, or if there are specific equipment requirements or other technological issues that need to be addressed in order to photograph sprites.

Sprites are an atmospheric phenomena associated with lightning during thunderstorms. From Wikipedia:

Sprites are colored reddish-orange in their upper regions, with bluish hanging tendrils below, and can be preceded by a reddish halo. They last longer than normal lower stratospheric discharges, which last typically a few milliseconds, and are usually triggered by the discharges of positive lightning between the thundercloud and the ground, although sprites generated by negative ground flashes have also been observed. They often occur in clusters of two or more, and typically span the altitude range 50 to 90 kilometres (31 to 56 mi), with what appear to be tendrils hanging below, and branches reaching above.

Optical imaging using a 10,000 frame-per-second high speed camera shows that sprites are actually clusters of small, decameter-sized (10–100 m or 33–328 ft) balls of ionization that are launched at an altitude of about 80 km (50 mi) and then move downward at speeds of up to ten percent the speed of light, followed a few milliseconds later by a separate set of upward moving balls of ionization. Sprites may be horizontally displaced by up to 50 km (31 mi) from the location of the underlying lightning strike, with a time delay following the lightning that is typically a few milliseconds, but on rare occasions may be up to 100 milliseconds.

In order to film sprites from Earth, special conditions must be present: 150–500 km (93–311 mi) of clear view to a powerful thunderstorm with positive lightning between cloud and ground, red-sensitive recording equipment, and a black unlit sky.

Basically, one would need to the same type of equipment needed to photograph lighting, with the additional requirements of a dark night sky and a clear view of a thunderstorm from a very distant position (≈150-500 km) not underneath cloud cover so that one could also see what is going on above the approaching clouds associated with the storm. Climates where the air is normally fairly dry also help increase the odds. In more humid places, the haze from water vapor in the air will limit one's ability to see, much less photograph, sich dim phenomena from such long distances.

In the image included with the question above, although it appears the sprites are closer to the camera than the clouds, in reality they are much further than the clouds and than anything visible on the ground all the way to the distant horizon. Sprites occur in the mesosphere that begins at about 50 km altitude and reaches to about 90 km.

There are many ways to go about capturing lightning, particularly at night. With the proper technique and a willingness to shoot long bursts of moderately long exposures, just about any camera capable of shooting continuous multi-second exposures for indefinite time periods can be used. Things such as lightning triggers can make it a lot easier, though. To capture sprites, having a lightning trigger with high sensitivity to lightning generated electrical signals that also allows one to set a delay of several milliseconds would help avoid capturing the potentially much brighter lightning in the same frame with the sprites if the much lower altitude lighting isn't hidden beyond the horizon due to the curvature of the Earth.

Here are several existing questions at Photography SE that talk about how to capture lightning:

Not the answer you're looking for? Browse other questions tagged weather sky lightning or ask your own question.

6
What safety precautions should I take when taking photos in the snow?
12
What camera settings should be used to capture sky shots without over exposing the clouds?
15
What kind of gloves to use for operating a camera in freezing temperatures?
1
What settings do I need for shooting a candid against the sky?
8
How do I photograph a wedding in the rain?
4
What caused the sky to turn green in this photo?
28
What could be the reason for these block-like artefacts in the blue sky?
2
What is the reddish cloud in the center of the photo?