How were pictures turned from film to a big picture in a picture frame before digital scanning?

How did people after taking a picture with film and doing the chemical processes, get that small film image to become a big picture that could be framed and hung before the invention of a digital scanner to blow up the image and print the image?

Going from negative film to a printed image is a two-step process.

First, the negative is developed — the latent image on the film brought out and then fixed in place. Now you have a piece of translucent film with a negative image on it.

Second, to go to a the final print on paper, you then essentially repeat the process, shining light through the negative to form a focused image on photographic paper — paper treated with light-sensitive chemicals. Then, this paper is itself developed and fixed. That reverses the reversed negative image again, resulting in a positive print.

If your negative is large — as in large-format photography — you may make contact prints, where the negative sits directly on the paper. This results in an image exactly the same size as the original. (See also "contact sheet".)

If your negative is smaller than the desired print (like 35mm film), you use an enlarger: a projector which shines light through the negative and uses a lens to focus the projection on your paper in the darkroom.

This is just the high-level view. The Wikipedia article for "enlarger" provides more detail, including this image: 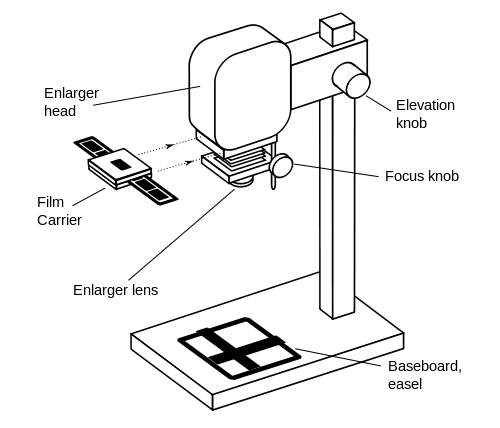 You can see why, with a setup like this, the work must be in a darkroom. Otherwise the ambient light would also affect the photo paper, resulting in a fogged image.

There's a bit more at How to proceed after having developed the negatives?, and there are many books and articles on the topic which are easily found now that you know what you're looking for.

The level of detail available in a high-quality photograph taken on film is amazing, but generally — just as with digital — the more you enlarge, the worse your results. Going from a 35mm negative to an 8×10" print is an enlargement of about 8½× in each dimension — or 72 times the area. If you have a chance to see an exhibit of 8×10 large-format contact prints, you should take some time to look closely and appreciate. It took a very long time for photographers working in the 35mm format to be taken seriously — this is one of the reasons the internet fascination with "full frame" is kind of funny.

I thought an illustration would be helpful. It's the same principle as an overhead projector, another mostly obsolete piece of technology: 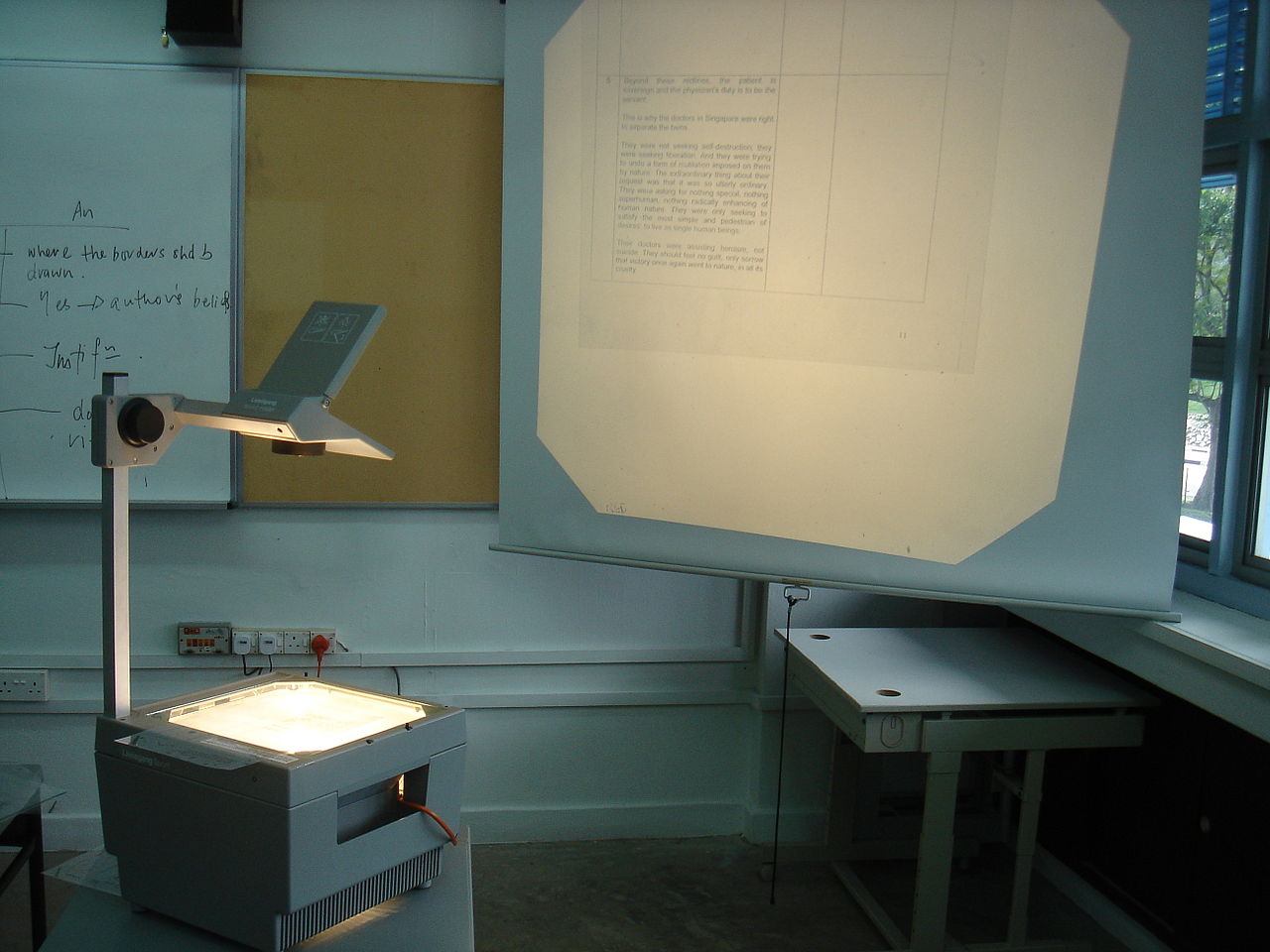 Where instead of textbook text on a transparency, the source image is a film negative, which is also transparency.

The screen in the image would in turn be another paper film, which is developed in the regular process. Two negatives make a positive, so this gives you your positive, enlarged print image.

Normal enlarging processes are kind of a reversal of taking a photo.

In a camera you gather light from a 'large area' in front of the camera, and focus it down onto a small area of film or digital sensor to collect the light. And in regular film photography that will capture an inverse image.

Film is made with a clear or at least very transparent base so that light can shine through it, and the parts that react will darken to reduce how much light gets through.

This is easiest to understand in black and white, where bright/white areas of the scene will appear as dark parts on the film, and dark areas will appear clear. The masking in colour film is more involved.

An enlarger is effectively a camera with a light source in the back behind the film, that allows you to project the image on the small film back through a lens and onto a larger surface, where you will place photographic paper to expose in nearly the same way as you did the film when taking the initial image.

There are various adaptations made to make these easier to use and better suited to the task than a normal camera, but you will recognize most of the focus methods and adjustment methods, and the biggest difference is that the equivalent of a shutter control is focused on longer duration periods due to the slow speed of photographic paper. [Which also enables one to interfere with the light during exposure, blocking parts so they get less exposure and don't get as dark.]

The stereotypical setup is to contain the film and light inside a box, and project the image onto a wall or table surface in a dark room, but some commercial lab equipment was designed to have all this contained in a larger box so that the techs could work with the lights on in the room.

It should also be noted that there are a LOT of details and specifics for the different systems that were used over the years, with some of the more recent systems actually being a 'scan and print' process, rather than purely optical/chemical system, and more closely resembles prints/enlargements from digital images. We even have systems that scan the film, and then 'print' onto photographic paper with a computer controlled light/laser system. [Which enables the image to be adjusted by computer, but still results in a 'photographic print'.]

The subject gets really deep with things like printing from reversal/slide film, and is well worth further reading or questions.

Not the answer you're looking for? Browse other questions tagged lens post-processing film photo-editing or ask your own question.

8
How to proceed after having developed the negatives?
4
What is a sheet of multiple photos called?

12
How to preserve detail when downscaling scanned photos?
34
(How) should I start with film photography?
5
What can be done about sloppy cut negatives?
2
How do I color correct a scan of a transparency with false colors?
2
Film Scanning and Correction
1
Canon ftb shutter sticking and not returning, but returns when I loosen the lens
0
How to clean glue or adhesive from film?
4
What's the right way to make digital representations of prints?
2
Do you advance your film to a new frame before or after taking a picture?
2
Why is my colour film developing leaving my film looking purple/giving blue tints to the photos?