How to reproduce Velvia 50 appearance with RAW processing?

It is well-known that Fuji Velvia 50 film has very vivid colors due to high color saturation. Strictly speaking, the film gives slightly incorrect results because the colors aren't that vivid in real life.

If I have a DSLR, and take digital RAW pictures, is it possible to reproduce the results of a scanned Fuji Velvia image by somehow adjusting the color curves in RAW software such as RawTherapee or darktable? If it's possible, how?

Of course, on an 99% of sRGB monitor, matching a Velvia image projected to a large white wall may not be feasible due to monitor limitations.

I found the Vibrance module in RawTherapee, which apparently increases the color saturation. Is that how it's done? At least in my tests I maxed out the slider, and still don't think the results are as good as Velvia, but the source images may have been not colorful enough anyway.

Unfortunately, I don't now have picture of the same scene as RAW and Velvia film scan so that a comparison could be made. I think I'll have to purchase a film camera and one roll of Velvia film someday to do a full comparison.

Related: Do colors always come out bland when shooting in RAW format?

Note: Even the most accurate representation of the actual film will not be able to reproduce all its properties - film behaves very differently than sensors or digital images, so if you really want to have that Velvia 50 look: Shoot Velvia. Although I myself am 90% digital, even I think that it is still great fun and very satisfying to shoot film from time to time.

The Film Simulation tool allows you to match the colors of a photo to a reference image with a single click. This tool requires the use of reference images in the HaldCLUT pattern, in either PNG or TIFF format. Each HaldCLUT image corresponds to one "look". Though the look can be based on anything, most of the reference images we ship are based on classic film stock, ergo the tool's name.

They even offer a download with a lot of film simulations - including Velvia 50 and 100. And while - as already stated - they are not able to reproduce that Velvia look 100%, I still think that as presets, they are pretty good: 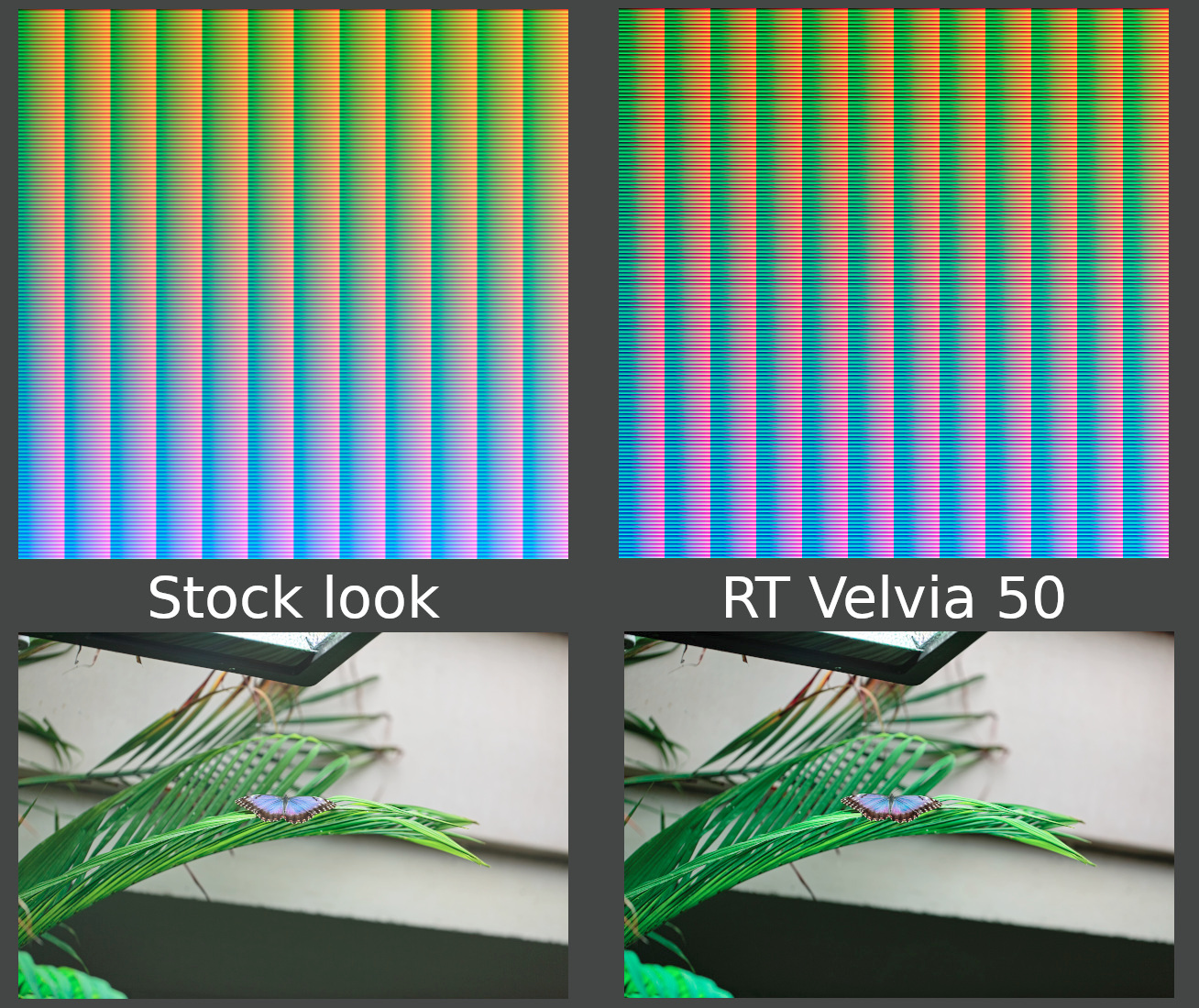 Just a random picture I took one day - "stock" is the edited version of the RAW, "RT Velvia 50" is the same as the left but with the Film simulation added. The upper part shows the HaldCLUTs for both.

The difference between profiles and these CLUTs is simple: a profile will overwrite your settings, while a CLUT will add the look after your changes. You will still have control of curves and all features.

You can even make your own presets fairly easily:

Generally speaking, what happens with most CLUTs (including the Velvia one) is that different channels get compressed (S-formed) curves and/or H/S/V-changes (per channel). Local adjustments, such as contrast, are generally discouraged by the tool:

To create a "look", the identity image is opened in an image editing program - any image editing program - and the colors are modified in some global way, for example using levels, curves, adjusting hue and saturation, etc. Only global adjustments such as the ones listed should be applied - local adjustments are incompatible with how this works; for example you cannot make a HaldCLUT image give a tone-mapped look, it cannot denoise, it cannot sharpen, but it can make skin tones look more tan, and foliage more vibrant.

After edit: Capture One offers the option for user styles, which are text files that have the parameters set. Phase One themselves sell some for C1 (called "Film Styles"), as does Really Nice Images (RNI). The latter offers that for Lightroom, too. Note that all of these options are different, though somewhat similar, for Velvia films.

Not the answer you're looking for? Browse other questions tagged raw film color digital-vs-film saturation or ask your own question.

10
Do colors always come out bland when shooting in RAW format?